Over 80 people died in the Greece, and the Greeks blame poor government response for death toll. 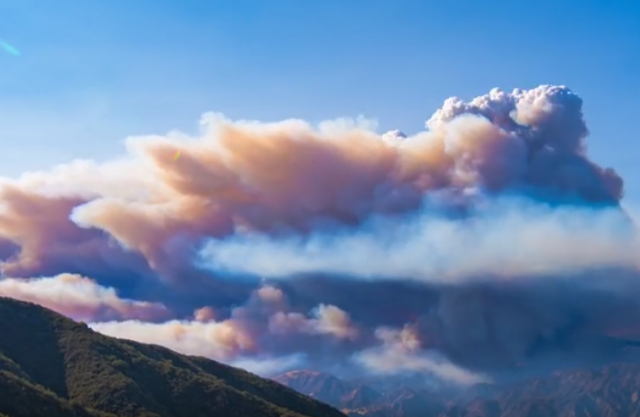 Wildfires are raging through California, and at least one is being blamed on arson.

A suspected arson fire that erupted in the San Jacinto Mountains near Idyllwild continued to spread Thursday as a second, smaller fire ignited just miles away and required the diversion of some firefighting resources.

The Cranston fire was deliberately set, authorities say, by a 32-year-old Temecula man Wednesday afternoon. The fire has destroyed five homes and caused thousands to flee. Chewing through grass and brush that have been baked dry by a heat wave, the wildfire has scorched 4,700 acres and is only 5% contained.

A towering pyrocumulus cloud has formed over the fire area, which will probably cause significant challenges for firefighters, said Capt. Scott Visyak of Cal Fire. Clouds from the pyrocumulus have already started collapsing onto themselves, which will cause the weather to change, Visyak said.

“Those clouds form from fire,” Visyak said. “It’s all heat, toxins and smoke.”

Brandon McGlover was booked on suspicion of five counts of arson. He is also suspected of setting multiple fires in southwest Riverside County, and more charges are possible.

Additionally, another wildfire stuck close to the famed San Diego Safari Park. Workers there were preparing crates in case it was necessary to begin evacuating animals.

Farther North in California, another raging wildfirw has killed two people and injured at least three firefighters, and is threatening the town off Redding. The blaze was caused by a vehicle malfunction on Highway 299, and is currently only 3% contained.

Yosemite National Park was evacuated in order to expedite the response to the nearby Ferguson Fire, which is now only 29% contained.

While Yosemite, which greets 4 million visitors each year, wasn’t under imminent danger from the Ferguson Fire, authorities decided to shut down the park to allow fire crews to perform protective measures — like burning away brush along roadways — without having to deal with park traffic.

Much of the fire, which has draped the park in heavy smoke, is burning in steep, rugged terrain west of the park with little to no access roads.

More than 3,300 firefighters are battling the wildfire, aided by 16 helicopters. One firefighter was killed July 14, and six others have been injured.

Not for nothing ::: I very likely know more than two pilots flying large and small support aircraft on any one of these…keep those planes in the air damnit!

On the other side of the globe, Greek authorities are blaming arson for a wildfire in the Athens vicinity that has claimed the lives of over 80 people.

Greece said on Thursday it suspected arson was behind a devastating forest fire which killed at least 83 people and turned the small town of Mati east of Athens into a wasteland of death and destruction.

In one of the worst Greek disasters in living memory, Monday night’s blaze trapped dozens of people in their cars trying to flee a barreling wall of flames.

“We have serious indications and significant signs suggesting the criminal actions of arson,” Civil Protection Minister Nikos Toskas told a news conference. He said police had testimonies to that effect, but did not elaborate.

Drone footage provides insight to the extent of the damage in the town of Mati, which was hardest hit by the disaster.

Legal Insurrection readers will recall the Greek economic troubles that have led to a series of bailouts, including a third one that has just recently been finalized. This has meant the country likely has little funding for emergency response, and victims of these fires are blaming an inept state apparatus for the scale of the disaster.

In Mati, the coastal village almost entirely obliterated by the blaze, the defence minister, Panos Kammenos, was heckled on Thursday as authorities announced that the death toll had risen to 85. Residents, who had lost loved ones and homes, rounded on the politician, telling him: “You let us burn. You left us to the mercy of God.

Prayers are being said that all these fires are extinguished with no further deaths.

The media talking heads and lefty politicos have been blaming global warming for the fires. I would not be surprised if some (most?) of the arson is politically motivated by the global warming crowd.

Time to re-read the great Michael Chrichton’s novel “State of Fear” to remember what these people are capable of doing.

Fyi – from Ace of spades
notes that the Department of Homeland Security in the USA has issued a warning about a jihadist’s call to start forest fires. From the DHS notice:

U.S. officials monitoring terrorist web sites have discovered a call for using forest fires as weapons against “crusader” nations, in what may explain some recent wildfires in places like southern California and Greece.
A terrorist website was discovered recently that carried a posting that called for “Forest Jihad.” The posting was listed on the Internet on Nov. 26 and reported in U.S. intelligence channels last week.

The statement, in Arabic, said that “summer has begun so do not forget the Forest Jihad.”
The writer called on all Muslims in the United States, Europe, Russia and Australia to “start forest fires.”

I have family that lost their beautiful restaurant on the water in Kinetta, they had no time to save anything but their lives. Lost all their pictures, files, family mementos…..

Fire season in California is also firebug season. Every time there are multiple fires, some of them are traced to arson. Adding political motivation will exacerbate this phenomenon.

Meanwhile, NPR is reporting on all of the high temperatures and fires, worldwide. They try really hard to get their interviewees to say that global warming caused them. Most of them do not want to go that far: they only want to say that hot, dry conditions make for a fire season.

Anybody ever read American Apocolypse by Nova? In that dystopian novel, there was a group called “The Burners”. Nova’s novel wasn’t intended as a how-to book.

Society cultivates its own criminals, then blames the government they chose for the results. After a while, people will be open to submit themselves to a coercion that establishes iron rule and discipline, such as Islam.

I want to know if USFS will allow timber salvaging in the post-wildfire areas. I want Brown to second salavge rights. The media need to ask this loudly and pointedly. NOW. Not some date in the future. NOW. The timber needs to be removed this comin spring and replanted post haste. But it will never happen because media are east coast centric – simply don’t care abut what happens in rural areas not in NY state. They only want that sexy smoke plume aerial footage and fire topping the crowns of 200ft sugar pines. WTF. Oh, and the film of weeping homeowners burned out of their homes. Sexy stuff! The camera <3's you! Frak'n vultures. I'm near pitch-fork anger level with our politicians – both right and left wing. WTF is Pelosi doing? DiFi? Where's my RIGHT WING rep and why isn't he in front of the press calling for the USFS to get off their asses – and get those timber sales done. NOW!

Also, a provio needs to be added to emergency federal aid to California/western state forest fire regions which states that all salvagable timber must be removed from these areas – and those salvage sale funds plowed into replanting projects the following spring.

We are well and truly into the archery dear season in Kali’s A Zone.

You may think I’m getting off topic, but wait for it. In Kali just like the rest of the southwest once you get outside of SF or LA everything is driven by water. Or rather the lack thereof. By July the land is stressed. The deer are stressed and on the move. The libs may appear crazy but they’re not stupid, at least those running the Department of Fish and
Wildlife (formerly known as the Dept. of Fish and Game). They want the deer population removed as much as you want to remove the deer. If you want to go deer hunting and not enter a lottery you just buy the tags for the A Zone over the counter and hunt in a frying pan. No water. Not even any moisture left in the vegetation. What makes it good deer season makes it good fire season.

We didn’t even know what those deer are. Further north along the coast you’ll find Columbian Blacktail. East, Mule Deer. But what the h3ll were these? We called them trash deer because if you examined them they were neither, or both. But they were out there and could be hunted. If you could pack enough water and move fast enough so the meat didn’t mummify before you got back to the vehicle.

You know what else was out there? Illegals. We’d find their campfires. If their campfires didn’t find us first. “Dry as a bone” just begins to hint at the conditions. How many of these fires were started by illegals? And do you think the [email protected]@rds would tell you. The same illegals who will sideswipe you and abandon their stolen van (ask me how I know) will outrun their runaway campfire.

Further south it gets worse. When I was stationed in Sandy Eggo I’d hunt the Cleveland National Forest along the border. Why, I don’t know. The deer weren’t worth it but it was something to do. My deer rifle of choice was a Springfield Armory M1A in 7.62 NATO with a ten round magazine and five additional mags. No, I don’t need all that to knock down a 140lb deer. But you never know whose trail you will cross down there and I have an allergy to getting beheaded by Mexican drug cartel members. I quit hunting when the Villistas in Sacramento banned high cap mags. Then I left the state.

These [email protected]@rds will not tell you how many of these fires were started by illegals. Take that to the bank.