“Today, the Chairman is fulfilling part of the commitment he made to the President to return our fallen American service members.” 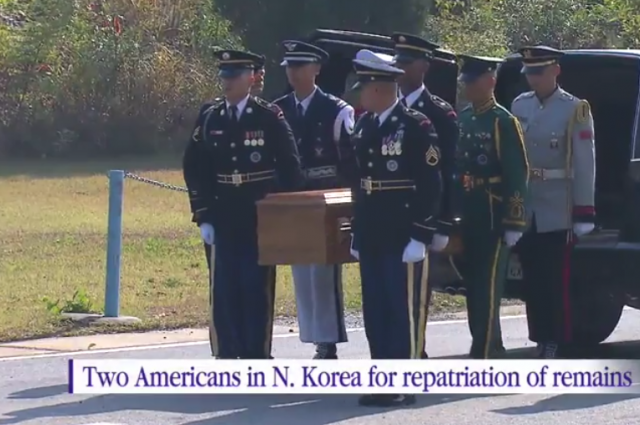 North Korea has transferred the remains of U.S. soldiers killed during the Korean War, in keeping with the agreement made in Singapore signed by Chairman Kim Jong-un at the historic summit with U.S. President Donald Trump.

The remains were carried out of Wonsan, North Korea, on a U.S. Air Force C-17 aircraft headed for Osan Air Base, south of Seoul, White House press secretary Sarah Sanders said in a statement. The plane arrived at the base at around 11 a.m. (Korean time).

A formal repatriation ceremony will be held Aug. 1 at the base.

“Today, the Chairman is fulfilling part of the commitment he made to the President to return our fallen American service members. We are encouraged by North Korea’s actions and the momentum for positive change.”

Friday marks the 65th anniversary of the signing of the armistice agreement that ended the three-year Korean War, and that may play a part in the timing. A forensic anthropologist was one of two Americans who has been in North Korea to assist in the preparation of the remains that will be returned.

The Coalition of Families of Korean & Cold War POW/MIAs President Richard Downes has stated that two Americans were sent to North Korea for the repatriation of the remains of American soldiers. The Americans are a forensic anthropologist and a coordinator for the handover process. In an interview with Voice of America, Downes said that a forensic anthropologist was sent to minimize the mixing of the remains.

…Unlike in the past when large sums of money had been paid for the return of the remains, no financial compensation was made this time. It is also expected to take a considerable amount of time to identify the remains. Identification will be made through photo tracking, DNA comparison, and dental records. But it may take more than a year to identify them all since the conditions of the remains are all different and multiple remains are likely to have been mixed.

A Seoul official said that 55 wooden boxes were sent to North Korea for the repatriation. It is not currently known how many sets of remains will be transferred.

The Trump administration is pleased with this development.

“Today’s actions represent a significant first step to recommence the repatriation of remains from North Korea and to resume field operations in North Korea to search for the estimated 5,300 Americans who have not yet returned home,” White House press secretary Sarah Huckabee Sanders said in a statement Thursday night.

Hopefully, the positive developments related to ending the Korean War officially will continue.

It’s all you ever “contribute”.

Gee, Rags, why ever did they bring along a forensic scientists…as I reported in the post! 😉

Gee, Leslie, it appears we agree on some-damned-thing.

Maybe the lil’ attack poodle will suggest you need medication now, too.

Hey Rags: In addition to the medication you need they’ll bring you some reading glasses so you can actually read the article you’re being such a prick on.

I mean, you should wave it around only after you read and comprehend what was written, instead of letting it sway in the breeze just for shock value.

The medication should help with that too.

Hey, ToilPaperhillip, you aren’t even a prick, and my point was much more broad concerning the NORKS and ONE forensic anthropologist.

You might read down-thread and note that many agree with me about trusting the NORKS, IF you could read instead of just spouting shit.

Yes, and if these turn out to be legit remains then this is, as Joe Biden would say, a big effing deal. US administrations for decades have been trying to get this done.

DO TRY to be rational, Yellow Pussy.

We regret to inform you that your Insurance Company will not cover “Getting My Ass Kicked By Fen Again” as party of your mental rehabilitation.

If you wish to proceed with that treatment, your total co-pay will be $545.50, not including any administrative fees.

Oh, and you might want to find some meds to curb your appallingly stupid fantasies.

Make up your mind. Do you want me to step up the trolling or answer the question? How about both?

Rag; do you trust the norks?

Do you stick your fingers in electric sockets? It’s sad you think this is some kind of gotcha question, pestering everyone like some hobo on the street.

Rag: would you trust just one –

And then you shift the goalposts to deny Trump did a good thing. If I say I would get a second opinion you’ll thump your chest about getting a third. And if I ask for three you’ll demand four.

Quite honestly, it really depends on

1) Verification. If the expert gives positive ID based on 100% match to dental records, scar tissue from a lawnmower accident, and the Molon Labe tat on the bicep, then I don’t need a second opinion.

2) Cost. How much will a second opinion cost? Do we have to pay to send him to NK or can he examine the remains here in the states?

These are obvious and valid answers. Ask yourself just how far your mind has deteriorated that they never occurred to you.

The sure bet on the LI board over the bar is Rags:Alcoholism. But I’m going with Brain Tumor at 6-1.

Just “No.” would have been fine for the first question.

Another qualified “No.” would have been at least on honest answer.

But you go into an insane riff about this, that and various nuttery.

It appears to just be who you are.

These are all positive steps towards peace.

Meanwhile, the hardest hit by these developments remains the deranged left.

It seems like a positive step, while I don’t trust Kim, and there is quite a ways to go, steps have been taken. Actions such as this should be viewed positively, though it needs to be with assurance that these bodies are those of our fallen soldiers.

This is good news, though, as it shows progress toward the goal of peace. Baby steps.

baby steps are required in ending a 65+ year conflict, with a history of duplicitous behavior.

it took a ‘real world’ businessman to do it.
another benefit of a non politician in the White House.

If we have no further improvement in our relations with NK, what Trump has accomplished is more than the last five presidents combined. Of course, he will not get any credit for this but we can all feel good about it.

Well he’s got a bigger functional button alright. And he’s got Mad Dog Mattis and Mike Pompeo standing by. There really is no reason why these remains should not have been returned years ago. It’s the right thing to do. But Kim Jong Un comes from a family of jerkoffs–and our prior Presidents have not insisted.

Fake news. Get back to what’s important, Porny Daniels.