Why no media outrage? 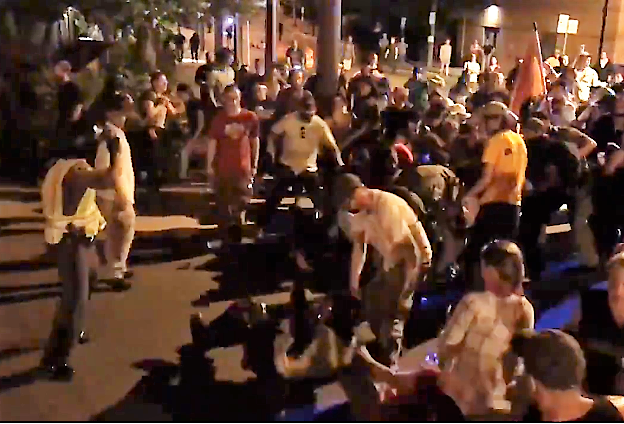 As noted by Mike, newspapers are responding to President Trump’s accusation that they are coordinating against him by taking their anti-Trump coordination efforts public.

“We propose to publish an editorial on August 16 on the dangers of the administration’s assault on the press and ask others to commit to publishing their own editorials on the same date,” The Globe said in its pitch to fellow papers.

While they are focused on working against the president for his “assault” on the press, antifa fascists in Charlottesville actually assaulted the press and a police officer. . . not that you’d know it from the lack of media coverage.

Maybe 100+ newspapers should coordinate an editorial against anti-press violence carried out by left-wing agitators. This isn’t the first time in the last year, either… https://t.co/iDkYgYGTgd

Apparently, there wasn’t much of a turn out on the “white supremacist” side, so the antifa fascists decided the press would be a good target.

The demo/march which started near UVA campus, had students in it at the beginning. Student leaders left the protest before it came downtown. Almost exclusively #Antifa at that point. #MSNBC live today in #Charlotsville and #DC https://t.co/YRm5jjgBQv

On the one-year anniversary of the deadly Charlottesville protests, white supremacists and radical leftists known as Antifa descended on the Virginia town once more to commit more violence. Late Saturday night, NBC News reporter Cal Perry and his crew were in the thick of it as Antifa members ganged up on them and attacked. The next morning, NBC’s Sunday Today ignored the attack and suggested the media was simply “heckled” by their assaulters.

On Twitter, Perry was documenting the protesters as they marched through the streets of college town when they started to get “very aggressive with the media” and trying to block their camera shots. “Yeah. We’re getting a lot of this. Protesters trying to grab our camera,” he responded to one Twitter commenter telling him to “f**k off national media vulture.”

Yeah. We’re getting a lot of this. Protesters trying to grab our camera. #Charlotsville https://t.co/xIWLXPdkLt

Getting ugly in #Charlottesville pic.twitter.com/WWZnexuzzm

Despite this video evidence from an NBC reporter on the ground, NBC dismissed the antifa fascists’ violent attacks as “heckling” and continued to attack President Trump and his supporters.

Despite the video evidence on the ground from their own reporter, NBC went to Garrett Haake who was at the White House in anticipation of violence there as another white supremacist rally was set to be held. “Overnight, tense moments in the streets of Charlottesville, Virginia, far left protesters heckling the media and chanting anti-police slogans,” he suggested at the top of his report. They actually used footage Perry and his crew shot but didn’t show anything from their attack.

. . . . [Chuck] Todd appeared on Sunday Today and had nothing to say about the attack or Antifa, which had been declared a domestic terrorism group by the State of New Jersey before he had them on last year. Instead of condemning Antifa, he lambasted the President for criticizing anthem protesters and targeted his supporters as racists.

“So I don’t think, if the President is, quote, ‘learned anything’ I think in his mind, he has seen this is an effective political strategy to keep his base, his base,” he declared about what the President had learned since last year’s violence. “That it is the president’s continuation of using to be generous, dog whistles, others say they’re not silent. You can hear the whistles pretty loudly.”

It’s sad and disturbing that NBC would choose to ignore violent leftists assaulting their own employees in exchange for railing against President Trump’s voters, but this appears to be the world we live in now.

Naturally, the antifa fascists and their supporters claim they are just doing the job the police won’t, as one sign in Charlottesville declared:  “We keep us safe” with the word “cops” crossed out (“no cops”). 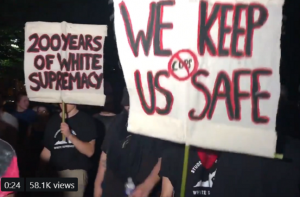 Here is video of the antifa fascists, as NBC explains it, “chanting anti-police slogans” (the rest of us see a police officer on the ground being beaten).

“100+ newspapers”!!! They didn’t mention how many White Nationalists were there but I bet it was dwarfed by the number of press. I remember when Spencer was having an event in D.C. There were about 300 attendees but 200 were the press. This is ridiculous. If you ignore these guys, they, Antifa and Alt Right, will both crawl back under the rocks they came out from.

It is well to remember that the initial Charlottesville white supremacist demonstration was set in motion by a left wing Obama supporter, and was furthered surreptitiously by Russian sponsored social media commentary and advertisements.
Elements of the left and the MSM seemingly believe racial tension is in the interest of the democratic Party.

Ashkenazic Jews, Asians, caucasians all are by and large smarter than the those complaining about supremacists. Their success is driven by intelligence, good child rearing, good education and work ethics. Part of their success is due to a willingness to defer gratification for years, even decades.

There is reason to believe that extreme hardship drove increases in intelligence which in turn lead to the ability to plan further into the future and to delay gratification for a better future.

There are still rather large numbers of people which are incapable of understanding these issues.

The media will take the hits because they are down for the struggle also. Self-sacrifice and all that.

Ah yes . . . if we didn’t have any “white supremacists” they’d have to invent some.

I think they did.

Karl Marx transformed an old fantasy, “socialism,” previously limited mainly to intellectual abstraction, by giving it a bogeyman, “the capitalist.” And once the street thugs had something concrete to rail against, a harmless abstraction became a destructive movement.

The “white supremacists” are both the excuse and the motivation for another violent movement. Whether or not they exist is—so far as “antifa” is concerned—a trivial detail.

Of course attacking their own propaganda arm was a tactical blunder. Street thugs don’t get smarter just because you’ve handed them a clear target. But a tactical blunder by the troops doesn’t imply that the antifa conspiracy doesn’t exist.

I fail to see what the agreement between all of these lying wasted of newsprint will make. All of them publish seditious opinions on a daily basis anyway!

Pretty much all media publishes today is opinion, or more like propaganda.

None of this is about the evils of White Supremacy. It is simply an excuse to use violence to further anarchy.

What people seem to over look is the fact that the white supremacist marchers did not start the trouble in Charlottesville last year, the anti-fa backed counter demonstrators did. They completely ignore the anti-fa actions in Portland, Berkley and a dozen other cities last year. Anti-fa are the left’s brown shirts. And the uber liberal MSM will never say anything against them.

As for the MSM mounting an offensive against Trump calling them “fake news”. if it wasn’t true, people would not be responding negatively to the press. Perhaps if the MSM would simply report the happenings of the day, accurately and truthfully, without the glaring ideological bias, they would not have to defend themselves from the President’s comments.

Because…
The only bad guys marching in the streets are those racist, nazi, Trump supporters.
The left is not violent. Period.
Gotta keep the narrative going, no matter how many reporters get beaten up…

It’s a matter of perception. Trump says unkind things about the press and they scream because they assume he is a horrible man with violent intent.

By contrast, they like Antifa. So when Antifa does something actually violent, they assume it’s a one off, a fluke, or even a right wing set up.

It used to be that a Conservative, was a Liberal who had been mugged. Now, even that won’t make them see reality.

At least a journalist was attacked…

Journalist, not journolist. They are separable. The former seem few and far between, and may actually be the rare individual who we should offer consideration, if not actually deference. Good luck to the journalists. Report the news, don’t spin the narrative.

Cops, even ones that will happily do nothing while Antifa beats the shit out of conservatives and libertarians, usually don’t take it well when they themselves are the targets of Antifa’s violence. So where’s the arrest of the people who assaulted that cop?

But this time in history, the likes of Antifa have met their match.

Btw, WTF is Sessions doing besides covering up for hillary klinton?

Sessionszzz is a Deep State plant. There’s no other explanation that makes sense.

Antifa is another thread in the ball of yarns spun by journolists for their patrons.

Ironically, the American Constitution is diversity (e.g. race or color) neutral. You would need to visit South Africa with their “progressive” Constitution in order to witness diversity (i.e. color judgments) as the highest law of the land. In fact, they may have the unique pleasure or displeasure of being the only progressive state on principle and in practice.

You know you are bad when you look and act worse than so called “white supremacists.” The press has been fanning the flames of this confrontation all week in order to get some sort of confrontation.

It seems fitting that the confrontation happened to them.