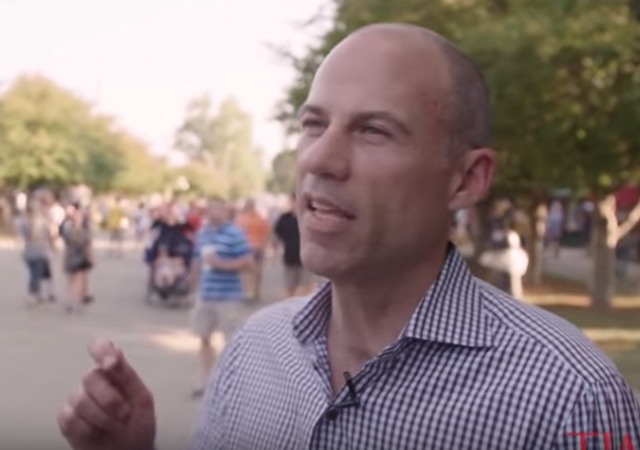 Michael Avenatti is looking for an extension on his fifteen minutes of fame. He has announced that he is seriously considering a run for president in 2020. He is even visiting Iowa on a listening tour.

Michael Avenatti in Iowa: ‘I’m exploring a run for the presidency of the United States’

Michael Avenatti has arrived in Iowa.

After three canceled flights and a 700-mile road trip, the lawyer known for representing adult film actress Stormy Daniels in her case against Republican President Donald Trump, is ready to put his stake in the ground in the first-in-the-nation caucus state.

“I’m exploring a run for the presidency of the United States, and I wanted to come to Iowa and listen to people and learn about some issues that are facing the citizens of Iowa and do my homework,” Avenatti told the Des Moines Register in an interview Thursday.

Avenatti, who rose to prominence as an outspoken critic of the president, toured the Iowa State Fair Thursday posing for selfies with fans. He is scheduled to speak at the Democratic Wing Ding fundraiser Friday night in Clear Lake.

That event, a celebrated platform for presidential hopefuls and rising stars alike, hosted Hillary Clinton and Bernie Sanders in 2015. Then-U.S. Sen. Barack Obama headlined the event during his first run for president in 2007.

He hasn’t been shy about his aspirations on Twitter:

What an amazing three days in Iowa. A state fair. Pork chops on a stick. A visit with a leading farming family. And tonight: the #WingDing. #Basta #FightClub pic.twitter.com/CnHMrRRcXt

Anyone that thinks the Dem party can nominate another career politician like the other 16/17 Trump beat in 2016 and defeat him in 2020 is kidding themselves. What makes you think #18 is going to be different? All the experience in the world means nothing unless you can beat him.

Here’s a short video from Time where he talks about why he is doing it:

Some of the folks at MSNBC seem to be open to the idea. Except for Washington Post “conservative” Jennifer Rubin, who thinks this would be a big mistake.

Michael Avenatti, adult-film actress Stormy Daniels’ lawyer and a vocal critic of President Donald Trump, is getting serious consideration from MSNBC as the next commander in chief.

Avenatti traveled to the Iowa State Fair and said Thursday he is pondering a run for the presidency, touting his ability to “take the fight to this president.” MSNBC’s “Deadline: White House” devoted a whole segment to analyzing his chances to win, with host Nicolle Wallace asking, “Why not?”

Wallace said Avenatti’s massage of being a “fighter,” telling his personal story, and connecting with voters “hit a lot of the right notes.” He talked about shaking up Washington, which Wallace likened to Trump’s own populist rise…

The lone dissenter on Avenatti’s prospects was Jennifer Rubin, a Washington Post columnist.

“Just because Donald Trump ran as a celebrity and has become the worst president in history, doesn’t mean the Democrats should duplicate it,” Rubin said.

She said Democrats are different from Republicans because “they do care about some of the policy issues.”

Oh, I so want him to join the parade of “leading” lights of the Democrat Party setting their sights* on the WH. The more of these con artists, the better the rest of us can see the dangers of Democrats. And they’re all con artists promising the numerous non-producing voters that they (the con artists) will give them (the non-producers) what they steal, using the niceties of law, from the less numerous producing voters.

*Are we allowed to use gun-related imagery?

“Con Artist” is exactly right – Avenatti has blown his legal career out of the water with his recent stunts (admonishment by a Federal Judge, etc) and so he’s looking for revenue anywhere he can find it. What better way than to go play a loud mouthed anti-Trump idealogue, and soak up a few million from gullible leftist mega millionaires who will fund it? (and there’s an endless number of legal ways that Avenatti can slide that money over into his personal us, Herman Cain pioneered that road years ago)

I have no doubt that he watched his client Stormy cash in at casino’s across the midwest, and thought “wow, I’m smarter than she is, I’ll bet I can top her take easy!!!”

I gotta say that I would vote for him before I voted for Kamala Harris…he has more accomplishments.

No matter, as my husband is still insisting I vote for Trump in 2020!

I have a pretty good idea of how Stormy pays him.

I would be content with Evil Overlord. And unlike the others, I will abide by the list.

He’s going to pull a Jill Stein and capitalize on the rampant TDS in the Dim community. Raise a bunch of campaign funds and then live high on the hog for a couple of years.

yep, and he’s got a lot of debts from past dirty deals that he has done that he desperately needs to pay off.

After decades of marinating in media culture, everyone is already familiar with Avenatti’s type. So when he started pounding on CNN’s tables very loudly, you knew he was angling for his own show, or a book deal, or was going to run for office.

At this point it isn’t even cynicism anymore, it’s just boring and expected.

Wanna guess who will be his running mate?

If Trump runs unoppesed in the GOP primary, as he should ( excpet for wackadoo like Egg McGuffin who will garner 10% ), I would vote for him in the Ill primary.

Just to increase the turmoil in the Dem party.

Update and For General Information on a related matter:

Stephanie Clifford (aka Stormy Daniels) and her husband “came to an agreement” regarding the resolution of the Temporary Orders in their divorce. She didn’t hire an attorney and didn’t even bother to show up to the hearing.

She simply signed on the dotted line and gave up (much to the disappointment of the local media, which was camped out in front of the Courthouse waiting to get an establishing shot).

Avenatti is a media windbag and nothing more. I expect that the Stormy Daniels stepping-stone that he used to get his national attention is just about worn through, and she will be discarded VERY shortly.

A mother that doesn’t fight tooth and nail for her kid? Her time is up. Too bad because the more CNN focused on her the more clownish they became. I bet they devoted more time to her and her lawyer than the triumph in North Korea.

He’s just an attention hog. Maybe this gets him more creds in the CNN exec offices, too. But I think there is no chance he would run for any political office given his history with money and business related charges. No way he wants that exposed in even more detail.

“All the experience in the world means nothing unless you can beat him … take the fight to this president.”

Avenatti doesn’t want to be president, he just wants to fight and beat Trump. Where the 9th circuit court is often more political than judicial, I wouldn’t be at all surprised Avenatti’s rhetoric in Iowa is for street cred and whatever political sway there is to be had before his appeal is heard there.

Avenatti after his last court set back: “We intend on appealing to the Ninth Circuit as we need to proceed with this case as quickly as possible.”

Could it just be a case of ‘virtue signaling’ to the 9th?

I would love to see a series of debates between Trump and Avenatti in 2020. It would be so entertaining. Maybe Avenatti just wants to get a lot of campaign contributions and keep them.

Howls of derisive laughter! How did Stormy pay for that legal aid you gave her again?

He should run, with Alexandria Ocasio Cortez in the VP spot. It would be a perfect ticket.

Avenatti is one seriously deluded dude.