“charge of theft of person, which is a state jail felony” 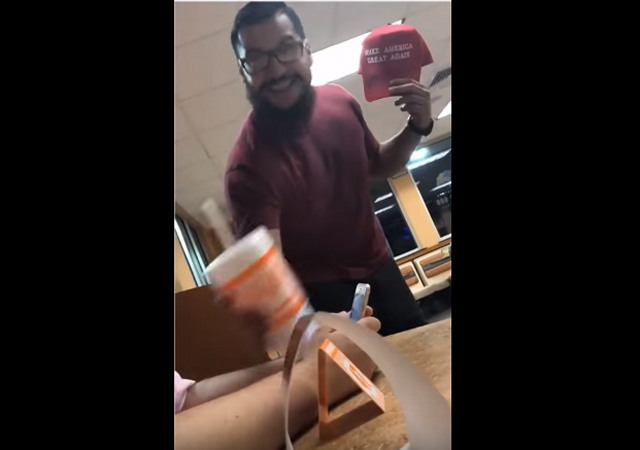 In July, we covered the story of a teenager in Texas, whose ‘Make America Great Again’ hat was ripped off his head by a man in a fast food restaurant. After stealing the hat, the man threw a large cup of soda in the teen’s face.

The teenager got the last laugh when his video of the incident went viral.

We cited this report from News 4 San Antonio:

Police are investigating after a teen says he was verbally attacked and assaulted at a Whataburger for wearing a Make America Great Again hat.

In the video, you can see a man throw a drink in 16-year-old Hunter Richard’s face before leaving the restaurant with his hat. Hunter said some of his hair was pulled during the assault.

Hunter was with his friends at the Whataburger off Nacogdoches and Thousand Oaks Tuesday night when it happened. They say the attack was unprovoked.

So went out for a 2am snack and my friend (wearing a MAGA hat) had his hat stolen and a drink thrown in his face (and mine, you can see my arms on the left of the video) pic.twitter.com/B3QjBFIxPk

After the media picked up the story, the assailant, Kino Jimenez was arrested and then fired from his job at a local bar. Now he has been indicted.

A Bexar County grand jury has indicted a 30-year-old San Antonio man who was arrested in July after he was captured on video grabbing a “Make America Great Again” cap from a teenager who was dining at a San Antonio Whataburger.

Bexar County court records show Kino Jimenez was indicted Wednesday on a charge of theft of person, which is a state jail felony. He was located in Universal City in July by San Antonio police robbery task force detectives who took him into custody on an arrest warrant…

Jimenez, who is out on bond, has a trial date of Oct. 19 in the 187th state District Court, presided by Judge Joey Contreras. Court records indicate he is being represented by defense attorney Ronald B. Cosgrove. The prosecutor on the case is Jason Goss.

Mr. Jimenez is apparently no stranger to trouble:

Jimenez has a criminal record that includes misdemeanor offenses for marijuana possession and driving while intoxicated, according to court records.

The report goes on to state that Jimenez has no felony convictions and could face as little as probation or as much as two years in jail.

give the commie lib the two years in jail or he will repeat this all over again.

If he gets probation, some street justice might be in order.

Possible, but not real likely in San Antonio. The Democrats are firmly in control in the city.

He may need more time to be “Re-Educated” on Good Manners. I hear Big Bubba can’t wait to start on the challenge. Hope he packs plenty of lubricant for his “vacation.”

One can hope that he assaults someone prepared to give him a good dose of lawful justice. From his name, he likely came from Mexico, and from his appearance he has significant black lineage, meaning that he has comparative low IQ.

Childish name calling, physically lashing out, disrespect for authority, putting a little ‘gift’ in your food order? What kind of ‘adult’ would do that?

Won’t even play a ball game with the RNC, no wonder the #walkaway movement…

“In fact, political ideology may indicate what a person believes, thinks, and does in more places than just the voting booth.”

“Liberals” are the ‘gimme something for nothing’ crowd.

They’ll support any leftist social cause in return for being bought-out. That’s the low end.

On the higher end, there are the likes of Weinstein. Or NBC executives. Or McConnell. Or McCain.

Dartmouth Survey Finds Democrat Students Are the Most Intolerant

“also are much less likely than Republican students to study and work on course projects with those of differing ideology”
https://legalinsurrection.us8.list-manage.com/trac…
–
“The vast majority of politically motivated violence is perpetrated by the left …”
Breaking News! Far Left: Immature & Entitled – MORE at 11!
https://youtu.be/WUu8M9B7nGM

Why are most mass shootings done by liberals / democrats?…
https://247sports.com/college/west-virginia/Board/…

That ‘control’ is our educational system.

We’ve ceded that control – to the most vile of people.

Thanks.
I see no charge for assault. He did throw a drink on the kid.

My guess is simple assault is a misdemeanor, larceny from the person is a felony. The authorities chose to start with the greater crime.

Don’t get your hopes up. If this jerk’s record is clean, he will probably get some felony diversion program and a nice dismissal of the charges once he completes the program.

His record isn’t exactly clean. He has misdemeanor convictions, plural, for possessing weed and a DUI conviction. The article doesn’t say his misdemeanor record is limited to those convictions or if he has others; those are just given as examples of what convictions his record includes but you never know with reporters as most of them can’t write.

That’s going to count against him when it comes time for a court to consider sentencing him to a diversion program. Multiple convictions for the same offense don’t incline most judges in Texas to go easy on you. If he drew the wrong judge (from his perspective) the judge doesn’t have to agree to a plea bargain that is limited to a diversion program. Also in Texas you have to be a “first-time offender” to qualify for a diversion program. I don’t know how they define the term. I don’t know if the drug convictions and DUI count as offenses or if he had to have other theft convictions (Texas has a comprehensive theft statute so even shoplifting would count).

But I actually wouldn’t be too upset if he was sentenced to a diversion program as long as he was sentenced to the maximum amount of time in the program. For felonies that’s three years, and I seriously doubt this doofus could keep out of trouble for that amount of time. He would have to sign a pretty comprehensive contract with the state in which he agrees to obey all the laws of Texas, and I bet he won’t be able to stay away from pot and I can guarantee with his record his diversion program would include urinalysis. If he fails a drug test he gets kicked out of the program and he’s convicted and goes to prison.

Concur; thank you. Unfortunately the case record doesn’t include all his priors so I have to rely on the press for that info. Which doesn’t fill me with confidence.

The thank you was intended for TX-rifraph. I don’t know how it ended up here.

Now it’s time for the civil trial to go after all the money the #resistance donated to this guy.

I looked at the docket Tx-RifRaph posted.

The guy applied for and was granted a court-appointed lawyer.

Great. We get shafted either way.

Would you deny him legal representation? OTOH, hope he gets what he paid for.

I dunno. The left is making me want to treat them the way they treat us. Kid picked on, a kid, for his hat and presumably for being white.

Isn’t that one of their “hate” crimes? Why should he get the considered and rational judgment he died these teenagers?

I would never deny him legal representation!

Nor a first class hanging.

I’d even volunteer to take the lead crowdfunding a brand new rope.

Not sure about Texas, but in a lot of places, the fine you get if convicted, includes a fee paying for part of the time the court appointed attorney spent suggesting you plead guilty to get a lesser sentence.

I was thinking about it this morning, and as far as I follow that in my state, which admittedly isn’t too much since I don’t practice criminal law, it’s mostly nominal fines, nothing that would come close to covering the cost of the policeman, the dispatch, the judge, the clerk, the prosecutor, the heat and lights in the building, etc.

The defense lawyer is just one small part of the whole process necessitated by thugs.

Why no assault and battery charge?

The civil suit should be fun.