Marc Caputo: “But CNN now needs to explain how it did NOT mislead its audience in suggesting Davis didn’t speak to them when, in fact, he apparently did.” 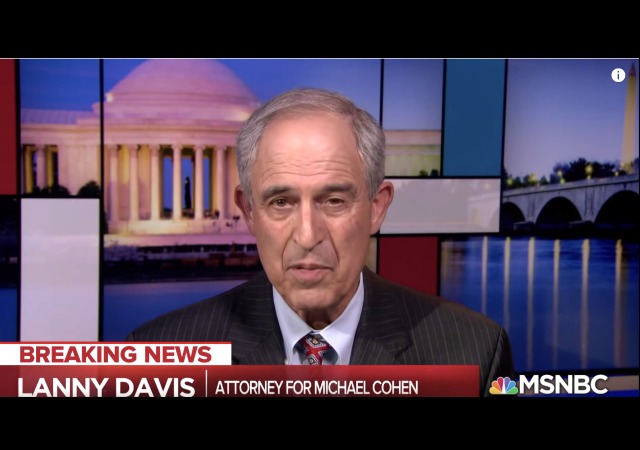 Just when I thought it couldn’t get worse for Lanny Davis, the lawyer for President Donald Trump’s former lawyer Michael Cohen, it has and yes it includes CNN.

It all goes back to that explosive CNN report in July when “sources” told the network that Cohen claimed Trump knew about the “dirt” meeting at Trump Tower with Russians. BuzzFeed reported on Monday night that source was Davis himself.

Here’s the buried lede: Davis came out as the source of the story, but CNN’s report stated that Davis declined to comment on the story.

Lanny Davis said he was a source who lied to CNN. That’s on him.

But CNN in the story in question wrote “one of Cohen’s attorneys, Lanny Davis, declined to comment.”

That means CNN might have misled readers about talking to Davis. Thats a bigger problem than a source-burn https://t.co/l7BXtzHU6m

There are possible (though perhaps flimsy) explanations about what happened. Davis obviously has an honesty problem. But CNN now needs to explain how it did NOT mislead its audience in suggesting Davis didn’t speak to them when, in fact, he apparently did.

One of these things does t appear to be true and I’m inclined to believe BuzzFeed pic.twitter.com/zZ3foVZr2Y

I do not do this. My best guess (in a light most favorable to them) is that, with a multiple source byline, one hand did not know what the other was doing, that the info was in different silos and that this fell through the cracks as Davis played double agent

“Truth isn’t truth” after all

I blogged about how Davis told CNN’s Wolf Blitzer that Cohen was present at a meeting where Trump and Donald Trump, Jr. discussed the Trump Tower meeting. A few hours later, Davis contradicted himself while talking to Anderson Cooper and insisted that Cohen doesn’t have information that Trump knew about the meeting before or after it happened.

Davis also told many reporters that Cohen had knowledge that Trump knew and cheered on the Russian hacking. Yeah, that was wrong, too.

CNN’s July 26 story has come under fresh scrutiny in recent days after Davis acknowledged he had served as an anonymous source for multiple news outlets who were seeking to confirm the CNN article in the hours after it published. Davis has backed away from the story in recent days, telling the Washington Post that he is not certain if the claim is accurate, and that he could not independently corroborate it.

Last week, Davis told Anderson Cooper, “I think the reporting of the story got mixed up in the course of a criminal investigation. We were not the source of the story.”

On Monday evening, Davis told BuzzFeed News that he regrets both his role as an anonymous source and his subsequent denial of his own involvement.

Davis told BuzzFeed News that he did, in fact, speak anonymously to CNN for its story, which cited “sources with knowledge” — meaning more than one person.

“I made a mistake,” Davis said. Regarding his comments about a month later to Cooper, he added, “I did not mean to be cute.”

Due to these changes, BuzzFeed reported that “the New York Post and the Washington Post outed him as their confirming source and published apologies from Davis, a lawyer and communications expert who became well known for his work for Bill Clinton.”

How about CNN? Nope! The network is sticking to its story: 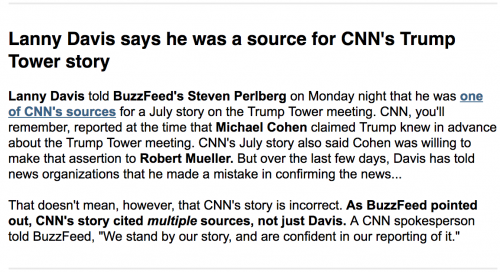 A spokesperson told BuzzFeed that the network stands “by our story, and are confident in our reporting of it.”

Multiple sources is why the network is sticking to the story. Well, one source just blew up in your face so who were your other sources?

Maybe CNN believes Davis told the truth in the July report and is lying now? Like Caputo said, Davis has an honesty problem. He has flip flopped too many times this past week for me to believe anything he says.

The fact remains CNN needs to be more careful. Once again, if you don’t want people and the president to call you fake news then don’t push out fake news or mislead us because apparently Davis did speak to the network about the July report.

Will this finally be the last straw for the entire MSM when it comes to this administration? You know, maybe calm down, take a deep breath, and double check everything.

There’s the possibility of a Narrative answer here too.

CNN was going to run the story anyway. They had attributed it to a ‘source’ in the campaign and left it at that. Then Davis sees the story, realizes he talked to CNN, *thought* he was being coy but might have accidentally told them (which in this theory, he had not)

So here’s Davis who has been told he’s the source, can’t remember every detail of the conversation he had with CNN…

(Tape your interviews, people. The life it saves may be your own.)

We here a CNN….Stand By Our Story…!!!
Of course, we don’t stand in front our story cause we might get run over…

Back to you Anderson….

“Will this finally be the last straw for the entire MSM when it comes to this administration? You know, maybe calm down, take a deep breath, and double check everything.”

C’mon, do you REALLY think this will be the last straw? Why do you insist on making me spew coffee from my mouth?

There is no “last straw”, they have long ago crossed the line to where they now simply make up a story that they think will be politically useful to their party, and run it. They do not even try to present a pretense of “truth” anymore. Objective Truth is rayciss, you know.

Trump is right – the MSM has become the Enemy of the American People.

Well, the enemy of the half of the American people that care about the truth.

Why does it matter that multiple liars conspired to push a false narrative?

Cohen’s credibility is already in the tank. What are the odds that Cohen doesn’t have anything prosecutable on Trump so Davis put the story out there to try to get a better deal for his client by trying to make it look like Mueller was ignoring evidence?

I mean, it’s New York….. those people are crazy. I learned that from watching Law & Order.

CNN is not only prejudiced, they are sloppy.

When you hire clowns , you are bound to get a circus.

Trump Haters: “Submit or we will disgrace ourselves again!”

Speaking of, anyone seen Mr Muh Principles? Funny how he seldom shows up in threads involving Democrat corruption.

Mr. Davis speaks with CNN on condition of anonymity. CNN takes notes, fleshes out the story, and then before going to press, floats the story past Mr. Davis for comment and he ‘declines to comment’ on the final story. While technically true, it’s still a deception designed to give the story legs / tension AND make CNN look like they tried to be thorough.

They do somewhat similar crap with the “subject did not respond to our request for comment” and the like.

You know – we really ought to have a Dictionary of common catch-phrases and hyperbole of the press – explore the limits of what such phrases mean AND their effect on readers in establishing (false) credibility, etc.

And Up-Chuck Todd blames conservative media for people not trusting the media.