“Rajoub was banned from attending any soccer matches in an official capacity for 12 months starting Friday.” 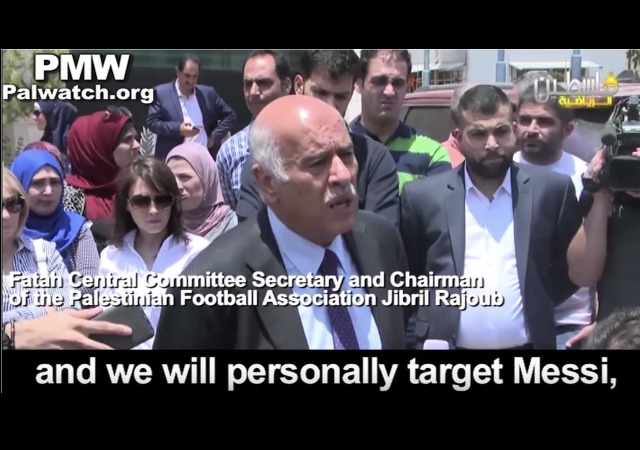 In June, the Argentine soccer team, which includes superstar Lionel Messi, canceled a friendly against Israel in Jersualem after players received threats “that exceeded those of the Islamic State.” Video even captured Palestinian Football Association President Jibril Rajoub threatening Messi.

Due to these actions, FIFA has banned Palestinian Football Association President Jibril Rajoub for one year.

In its decision, FIFA’s disciplinary committee cited comments by the Palestinian FA president “calling on football fans to target the Argentinian Football Association and burn jerseys and pictures of Lionel Messi.”

Rajoub was banned from attending any soccer matches in an official capacity for 12 months starting Friday.

At the same time, FIFA member federations also rejected a Palestinian proposal to amend world soccer’s statutes with a stronger stance against human rights abuses. FIFA members voted 156 to 35 against the motion, which was formally supported by the Iraq and Algeria soccer bodies.

Rajoub can still fun the foundation and attend FIFA meetings. However, his “ban will apply for the 2019 Asian Cup in United Arab Emirates, which kicks off in January, and likely include the start of the 2022 World Cup qualifying program.”

FIFA began “disciplinary disciplinary proceedings against Rajoub in June, after Israel lodged a complaint with the organization.” Reuters reported in June (notice how the word threats is in quotes):

Argentine FA chief Claudio Tapia said earlier on Wednesday that there were “threats” but gave no details. He confirmed the match’s cancellation and apologized to Israeli fans.

The Israel Football Association (IFA) accused the Palestinians of crossing a “red line” by inciting anger towards the Argentinian players in order to scupper the match.

“There is an issue of personal threats against players. If a politician publicly calls to burn a shirt, somebody could take it a step further. I don’t think that the people who run world soccer can ignore this,” he said.

He will still be welcome by the Neanderthal League.

Palestinians are truly a lower form of life, instilling hate in their children young and often. Reproducing at excessive rates which doom their children from ever being able to achieve their potential or living productive lives. It is a shame and such a waste. It seems that most of their problems are the fruit of Islam.

The ban should have been for a lifetime. Let this miscreant visit his hate somewhere else.

Zero tolerance for Islamic supremacism, totalitarianism, belligerence, anti-Semitism and the rest of that ideology’s infantile and spite-filled pathologies.

There is nothing supreme in Islam. Muhammad’s example of looting, murdering & raping most certainly stuck with his flock. Ad to that inbreeding, leading to up to a fifteen point loss of IQ and irrational and frequent rage.

Timeout for a Terrorist

Muslims inject Islam’s hate into everything.

How bout they just boot the non-state entity out of FIFA? It’s not as if they will ever win anything, except by blowing up the opposition.

Palestinians need a boot, since they highly value martyrdom, very large numbers should be rewarded with it.