Palestinian soccer terror: Threats against Argentinian players cause cancellation of match in Israel

Palestinian soccer terror: Threats against Argentinian players cause cancellation of match in Israel

“The association views with severity the physical and brutal threats that crossed every red line made by the head of the Palestinian association, Jibril Rajoub.” 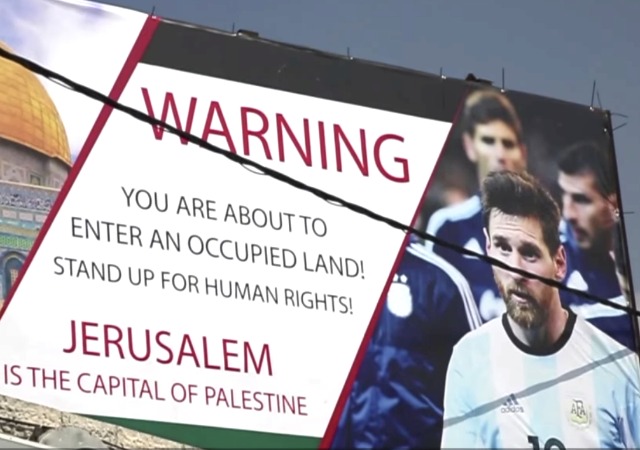 The Argentine soccer team had to cancel a friendly match against Israel in Jerusalem. So I googled “Argentina soccer Israel” and unfortunately I am not shocked to find that many outlets have framed this story as a win for the BDS movement.

I hate to break it to you anti-Semites and anti-Israel crowd, but the ACTUAL REASON is because Argentine players received threats that “exceeded those of the Islamic State.”

But the official reason for the cancellation, given by Chichi Tapia, head of the Argentine Football Association, was that his players had faced serious threats, which forced them to cancel. He said the team would try to play in Israel at another time.

In an interview with Agencia Judia de Noticias, a Jewish news service, Argentine Foreign Minister Jorge Faurie said the threats had exceeded those of the Islamic State, also known as ISIS.

Tapia talked about ISIS threats because the terrorist group threatened to behead Messi and Portugal star Cristiano Ronaldo at the World Cup, which takes place in Russia in a few weeks.

TRANSLATION: Tapia, after the cancellation of the friendly in Jerusalem. He spoke of the threats and apologized to the Israeli community and the Jewish community: “It was a contribution to peace. It was a clear message that football is a sport that transcends religions ”

Israeli Culture and Sport Minister Miri Regev brushed off the claims it had anything to do with BDS by showing posters of the threats thrown at the Argentine players. From The Times of Israel:

“The game was canceled for one reason only — threats to the life of the star Messi,” Regev told reporters. “The terror threats against him and his family overwhelmed the world soccer star,” she said, adding that this information came from the producers of the event.

Showing images of some of the threatening posters sent to players and officials from the Argentine team, Regev drew a comparison between the threats and the deadly 1972 attack, when Palestinian terrorists kidnapped and killed 11 Israeli athletes competing in the Munich Olympics.

“These are photos by terror factions threatening Argentina’s team members,” she charged. “This is a new-old form of terrorism which scares, deters and terrorizes athletes. This is the terrorism that causes the Munich attack.”

In fact, they changed the match to Jerusalem because Messi wanted “to visit the Western Wall ahead of the World Cup.” He’s also visited Israel before.

BREAKING NEWS: Israel’s Minister of Culture and Sport Miri Regev, announced that under threats to harm footballer Lionel Messi and his family should he play in Israel, the Argentinian soccer team apologized for having to cancel their game in Israel. https://t.co/qMxHwmqW0C

Shame on the Palestinian leaders who have used the friendly match between #Israel and #Argentina to threaten the safety of Argentinian football players and their families. A disgusting Palestinian incitement campaign using sports to embolden terrorism.#RedCardtoHate pic.twitter.com/cZnF4xmuVZ

Israel has called on FIFA to investigate the threats against the Argentines. BTW, Reuters placed threats in quotes. I guess they don’t believe the Argentine team. From Reuters:

Argentine FA chief Claudio Tapia said earlier on Wednesday that there were “threats” but gave no details. He confirmed the match’s cancellation and apologized to Israeli fans.

The Israel Football Association (IFA) accused the Palestinians of crossing a “red line” by inciting anger towards the Argentinian players in order to scupper the match.

“There is an issue of personal threats against players. If a politician publicly calls to burn a shirt, somebody could take it a step further. I don’t think that the people who run world soccer can ignore this,” he said.

Eini also stated that “[T]he association views with severity the physical and brutal threats that crossed every red line made by the head of the Palestinian association, Jibril Rajoub.”

if i really spoke my mind on this, i’d get banned.

Palestinians should be banned from all international sporting events.

I do have some sympathy for the Argentinians; I think they all know that Iran (among others) has had many agents working Buenos Aires, aided and abetted by the previous Nestor government, and the Iranians have carried out assassinations against those that have crossed them. The players were not wrong to believe that the threats against them and their families were real.

There should be a worldwide search and destroy operation for Iranian agents.

That BDS wants to claim this as a win for their cause ought to be broadcast far and wide. Make sure everyone knows how deeply into terrorism they are embedded.