“Instead of answering the question, she gave one of her classic Warren non-answers.” 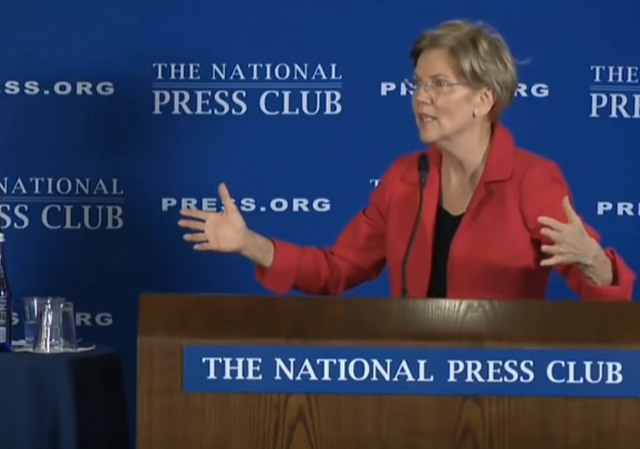 A couple of weeks ago, the Democratic National Committee voted to accept donations from the fossil fuel industry. That was a big deal to the voters who make up the Democrats’ base, especially younger supporters. A few times a year, we see student activists at various schools demanding that their college or university divest from the fossil fuel industry.

This decision stings for the left even more because the DNC is reversing a decision they made to ban fossil fuel donations just a few months ago. When asked about this decision, Elizabeth Warren provided a non-answer.

Critics of the newly passed resolution are calling it a reversal of the DNC’s recently adopted ban on accepting donations from fossil fuel companies’ political organizations.

DNC Chairman Tom Perez sponsored Friday’s resolution that allows the committee to accept contributions from “workers, including those in energy and related industries, who organize and donate to Democratic candidates individually or through their unions’ or employers’ political action committees.”

Perez, who served as Labor Secretary in the Obama administration, said the new measure was a commitment to organized labor. The resolution also says that the party wants “to support fossil fuel workers in an evolving energy economy.”…

The June resolution, which was unanimously approved at the DNC’s meeting in Providence, Rhode Island, prohibited contributions from oil, gas and coal companies and associations.

The DNC is not having a great year for fundraising, which may have had something to do with this.

Elizabeth Warren, who you would expect to side with the left wing of her party on this issue, was asked about it during an appearance at the National Press Club on Tuesday. Instead of answering the question, she gave one of her classic Warren non-answers.

While delivering a speech at the National Press Club, Warren on Tuesday unveiled legislation that would ban members from the White House and Congress from owning individual stock — a move she claims will reduce conflict between investment and lawmakers. However, during the question-and-answer session, the progressive senator did not appear prepared to directly address a controversy that has been plaguing the DNC in recent days.

When asked whether she agreed with DNC Chairman Tom Perez’s decision to once again allow fossil fuel-related PAC donations, Warren did not directly address the question, and instead offered a long-winded response about how everyone needs to abide by the law.

Will the media press Warren on her answer? Don’t count on it.

“This decision stings for the left…”

Does anything sting them?

What’s so funny about all of this is that the Dem establishment is desperate to nominate Liz Warren in 2020, they don’t want Sanders, they don’t want any of his followers, they know Biden is too old. So they are pushing and pushing her forward, even though she is already so fatally flawed she doesn’t have a chance. If she was nominated, it’s be about like the GOP nominating Bob Dole in ’96. A disaster of a candidate that they just couldn’t resist.

So the dems are against fossil fuels,but now want to accept donations from them. Can anyone say hyocrisy?

The real big screw-up on the Dem’s part is that back in the old days, the oil and gas biz, and it’s money, was always in their pocket. Started with FDR during WW2, when his administration did everything they asked in exchange for them ramping up production for the war. Then, they bankrolled LBJ and Sam Rayburn all the way, and that’s when things like the Depletion Allowance and all kinds of other tax benefits got written into the law.

And then came the enviro movement, and what was once the Dem’s biggest pot of cash was despised and hounded and finally kicked out of the party, until they had no choice but to throw in their lot with the Republicans and see if they could get treated decently there. That’s not the complete story of why Texas switched sides politically, but it’s a part of it.

Her name should be Dances with Questions.

That’s hypocrisy.In all it’s glory. No wonder she doesn’t want to answer it. These people would have us dependent on foreign fuel while wasting our money on “alternative options”.

Without Hate and Lust for Power, Democrats would have no principles at all.

Most here do not understand what I call ‘Libgic’. Unlike logic, libjic is an irrational excersise in Social Justice. Libgic has to be learned. You can now go back to college and learn Libgic 101. I think many universities pedagogy even have graduate degrees in Libgic.

Once you get a grasp on the mechanics of Libgic only then will Warren become comprehensible. The veil of Libgic has to be understood.

The Sir Humphrey Appleby filter will translate English into Libgic.

That this harridan has a future in politics in any capacity should scare us all.

During those years their highest cash charitable contribution level was 3.3% in 2012 with an average of 2.8% across the 5 year period. Why are Democrats so consistently cheap? Kerry, the Clintons, Warren… cheap, cheap, cheap.

One other interesting item. They have very little passive income generation given their income levels. What do they do with all the cash they make?

Nasty woman is a vapid misanthrope and as irrelevant as Kim Kardashian. Were it not for Yahoo or similarly pandering purveyors of mindless entertainment, they would never have been heard of.

At best, Pocahontas serves as a distraction for the left who desperately hope to put Hillary out to pasture.

On the uptick, Hillary and Pocahontas are both more interesting than Al-Gore.

I am unclear as to why an industry would give money to a party that is singlehandedly doing its best to close them down. It’s not like the promises form the Democrat Socialists would be worth anything. Especially a liar like Warren (Fauxcohontas, Liawatha)….

To wit: “Right now, renewable energy competes with fossil fuels that get lots of special breaks from Washington. But we know that we can generate electricity with alternative energy sources like wind, solar, and hydropower. We also know that we can make energy usage far more efficient. We can commit ourselves to clean energy and energy efficiency now – by ending tax subsidies for fossil fuel companies, choosing to invest in clean energy tax incentives and grants to help local communities transition to clean energy sources, and increasing federal support for energy efficiency programs that protect consumers and help low-income families weatherize their homes. If we invest now in a 21st century energy future, over time the costs of production will fall for businesses. In fact, it’s already happening.”