“One of the things we have to remember is we need an immigration system that is effective, that focuses on where real problems are.” 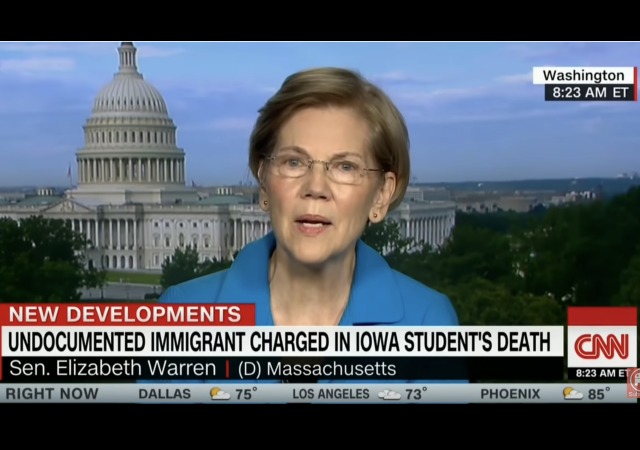 On Tuesday, authorities in Iowa believe they discovered the body of 20-year-old college student Mollie Tibbetts, who went missing on July 18 while on a jog. A medical examiner still needs to conduct an autopsy, but the authorities arrested an illegal immigrant and charged him with first degree murder.

CNN host John Berman asked Sen. Elizabeth Warren (D-MA) about immigration laws and she responded with some sympathy for Tibbetts’ family, but then went on an attack on how illegal immigrants are treated at the border.

Berman said: “I want to get one last question in here because it is a story, a very important story in the news, it has to do with Mollie Tibbetts, the young woman in Iowa who was murdered. Her body believed to be found yesterday. A person has been charged with it. This person the person is an undocumented immigrant. Mike Pence and the President have suggested the immigration laws need to be stronger so that people like this man who is accused of this murder were not in the country. Your reaction?”

Warren responds with a little sympathy for Tibbets’ family and the community at the University of Iowa, saying she’s really sorry and she knows it’s really hard for them, but…..

“One of the things we have to remember is we need an immigration system that is effective, that focuses on where real problems are.”

Great! Warren wants to discuss real problems like people who are a legitimate threat to the country and citizens. This is a great way to discuss ideas so another family doesn’t have to lose a loved one, right?

Perfect! Now we will get somewhere right?

“…and I don’t think mamas and babies are the place we should be spending our resources. Separating a mama from a baby does not make this country safer.”

Okay. I won’t get all outragey over this, but I will admit this comes across as insensitive.

Why Warren didn’t just stick to her line “I think we need immigration laws that focus on people who pose a real threat” is beyond me. Why she would bring up separated families at the border while talking about a girl who is now PERMANENTLY separated from her family boggles my mind. Tibbets’ family will never see her again. They don’t have a chance of ever speaking to her again, holding her, calling her, or texting her.

I think we can get behind Warren and agree that yes we need immigration laws that focus on people who pose an actual threat to our country.

But as awful as it is to separate families at the border, it’s nothing like losing a child. It’s every parent’s worst nightmare.

“I think we can get behind Warren and agree that yes we need immigration laws that focus on people who pose an actual threat to our country.”

Molly Tibbet’s life was worth more than all the illegals and their anchor brats. Illegals need to be driven out in mass. While blacks have the highest crime rate per capita, Hispanics have second place.

I guess when she said she wasn’t running for President in 2020 she was serious.

If she wasn’t being serious than this comment where she blows off Tibbet and her family in order to talk about illegal aliens is the iceberg hitting the ship moment for her.

notamemberofanyorganizedpolicital in reply to Blueshot. | August 22, 2018 at 6:34 pm

Wise Indian once say:
“Lizzie talk out of all four sides of cheeks.”

The only reason the MSM and the Dems were ever interested in this story was when they thought they could pin it on some poor old farmer who they would say was a typical Trump supporter.

But Oh Noes!!! It was committed by an illegal alien!!! Well we talk about the Death of Trayvon for years and years and years, but now we can’t even be allowed to discuss the death of Molly Tibbets for 24 hours, because it Hurts the Narrative!

Strangely, MSNBC hasn’t updated their story about her body being found since yesterday. No mention of the criminal-alien nor his legal status.

CNN Does mention his name but forgot to mention that he’s here illegally.

And people wonder why we don’t trust the lame-stream media.

Of course CNN mentions the kinda-confessed killer’s name. His first name is Christian, which should trigger all the right (wrong) people.

Dead victims can’t cry out from the grave with 8 second sound bites. Living “victims” can be replayed over and over again. The “cost” of creating an open borders one party rule in this country is bearable by the Dems since the greater good and glory in the future will outweigh the present misery. Lenin and Stalin believed this…so do the Dems. The millions who died to “perfect” global socialism/communism gives us an idea that many more Mollies are in our future at this pace.

“I think we can get behind Warren and agree that yes we need immigration laws that focus on people who pose an actual threat to our country.”

Warren. Elizabeth Warren? I think she’s in Congress; a U.S. senator, in fact. I don’t recall her bill to overhaul our deeply flawed immigration system, but I sure do see her burping up tired ol’ narratives in front TV cameras.

Apparently, Mollie wasn’t a dreamer to Warren, and wasn’t worth more than idle prattle.

Actually, she does have a bill in to functionally prevent ICE from stopping anyone at the Mexican border and stop all deportations. Interestingly enough, it is co-sponsored by Senator Cory Gardner [GOPe-CO].

Warren is Pro-Choice. An advocate for selective-child, and, apparently, selective-American.

Yes, she supports abortion. Now if someone would just invent a time machine we could send her back to her mama’s womb and get her aborted.

This from the same woman who last month was calling for the abolition of ICE.

So without an Immigration Enforcement agency, how exactly are we going to focus on those “real threats” coming across our border, Lizzie? Cross our fingers and hope for the best? Or should we just pray that the “spark of Divinity” in these criminals stops them from murdering more of us?

So thoroughly sick of these corrupt and idiotic politicians who insist that minor inconveniences suffered by foreigners who voluntarily and knowingly come here with children to violate our laws are somehow more important than the fact that innocent American citizens are being robbed, raped, and murdered in their own country every day by illegal aliens who have no damn right to be here!

and I will not get answer to my question to him

Yes, open mouth & remove all doubt. Heralded as an excellent writer but one could argue that his twisted writings are cause for an institution 😉 King proves himself a douche 🙂

I read this to mean that on Planet Liz, murdering joggers isn’t a real threat.

Well, it was good of her to clear that up.

“I read this to mean that on Planet Liz, murdering joggers isn’t a real threat.”

She’s only a white girl, nothing to be concerned about. /sarcasm

Maybe ‘Lizbeth should hold a pot luck to raise funds for this poor unsettled wanderer’s defense fund. Maybe she could get Mollie’s family to come and speak about important things.

Let’s see, 20% of Mexico’s citizens live in the USA. The fine citizens of Honduras, El Salvador and Nicaragua seek to join Mexico’s ex-patriots within the USA. Syrians, East Indians, Chinese and others able to travel to Latin America also seek refuge in the USA.

There are 8 billion people who currently reside outside of the USA, but only a few million try to get inside our borders every year.

Who says we need border protection? At the current rate of immigration, it will take 8 thousand years before everybody outside the USA immigrates to the USA. Surely something will assimilate with something else within that time frame.

You forgot to factor in birth rate. On average each illegal immigrant family has ten kids. And each of their ten kids have ten more kids. And their kids have ten kids. And before you can say mucho gracias, the U.S. will be 97% Latino, 2.99% Black, and .01 percent mixed White/Asian.

Would trade Fauxchantas for Molly any day.

Or for just about anybody.

Not a fair trade since one has a soul and one doesn’t.

Is there any chance of prosecuting illegals who murder someone under a Federal law, with capital punishment?

Old Princess Liawatha thinks we should have give the guy a sammich a beer to rest up after killing Molly. Maybe a cot and a blankie as well.

She’s giving all the other idiots a bad name.

Democrats are being the socialists they are and following the Rules for Radicals… Democrats have to demonize, as they are the party of division and hatred, and the MSM supports this concept wholeheartedly.

Can there really be a ‘blue wave’ coming? Are there that many people throughout the country that endorse murder by illegal aliens and murder of unborn children as a welcome policy?

Antifa says the U.S. flag is a fascist symbol and beats up anyone who proudly displays it. The Democrats are the “foreigners first” party that despises worthless Americans whose lives don’t matter. And certainly their votes don’t count, hence their witch hunt against Trump. They’d impeach him over unproven allegations of jaywalking even if they had to pay the Kremlin for those allegations.

They are now officially the anti-American party. They don’t just hate Trump, they hate us. And they can’t help but take the mask off and show it. Nice of Liz to make the GOP/Trump campaign commercials.

I agree with Liz. Legal immigrants seeking asylum for legit purposes should not be separated from their children(*) while in detention awaiting the legal process to complete. Unfortunately, there’s this judge who *ordered* it back during the Obama administration, so complain to him.
—
(*) Except in cases where the children may legally stay in the country with legal relatives already here, as quite a number of them do.