I googled “Kavanaugh Poll” this morning and came across articles declaring that polls show Supreme Court nominee Judge Brett Kavanaugh has low support from women & the public overall and is one of the most unpopular picks in a decade.

These articles came out about 19 hours ago yet a Quinnipiac University Poll from August 15 showed Kavanaugh gaining public support, mainly with independents and women almost evenly split.

Here’s what showed up in my Google search: 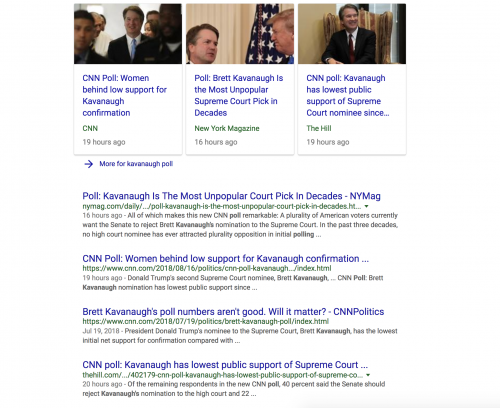 Here is the August 15 Quinnipiac poll: 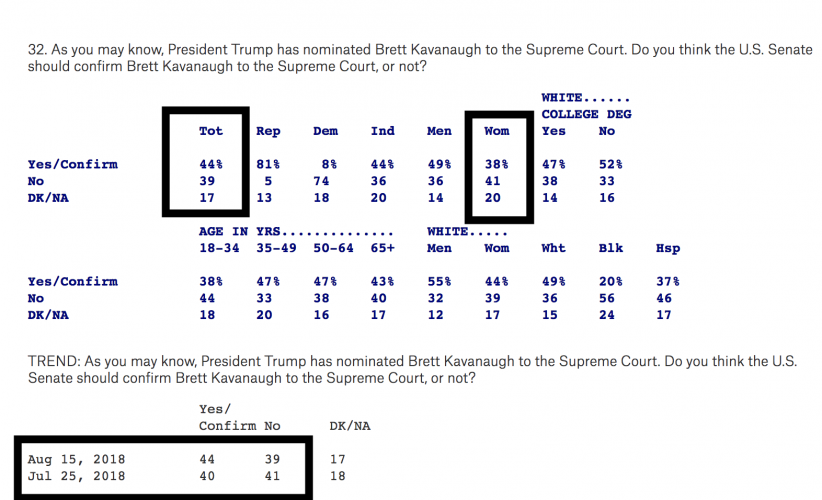 In Quinnipiac’s July 25 poll, only 36% of the independents said they wanted the Senate to confirm Kavanaugh. That poll only had Kavanaugh in the yes column by 1 point, 40% to 41%.

Despite what the polls say, I doubt the Democrats can stop Kavanaugh’s confirmation because they need two Republicans to vote no and so far no one has voiced opposition to him.

Due to Kavanaugh’s previous rulings on the 4th amendment, I thought for sure Sen. Rand Paul (R-KY) would oppose the nominee since he has done filibusters to preach against violations of the amendment.

On July 30, Paul said he supports Kavanaugh. From The Hill:

“After meeting Judge Kavanaugh and reviewing his record, I have decided to support his nomination,” Paul said in a statement.

He added that while no one will “ever completely agree with a nominee,” they “must be judged on the totality of their views, character, and opinions.”

“I have expressed my concern over Judge Kavanaugh’s record on warrantless bulk collection of data and how that might apply to very important privacy cases before the Supreme Court,” Paul said on Monday.

He added he hoped Kavanaugh would be “more open” to protections on digital records and property in the wake of a Supreme Court ruling that found, in most cases, law enforcement has to obtain a warrant in order to search and seize long-term cell phone records that would show a person’s location.

“Of course, my vote is not a single-issue vote, and much of my reading and conversation has been in trying to figure out exactly how good Judge Kavanaugh will be on other issues before the Court,” Paul added.

Sen. Susan Collins (R-ME) and Sen. Lisa Murkowski (R-AK) are two moderates that may vote against Kavanaugh, but they likely will not say anything before the confirmation hearings.

Kavanaugh will be confirmed, making it a Firm Five. Ruth Buzzy, who delusionally thinks she’s in charge of the length of her life span, may suffer a snip of the Abhorred Shears of Atropos sooner than she thinks, with DJT naming her replacement (yes, the Senate will remain GOP). Breyer, longing to spend his final days eating Breyers® Ice Cream with his grandkids and realizing that he will now be facing a Solid Six, responds to the loss of the Buzz, by crying, “What’s the use; I can no longer effectively legislate on behalf of the Democrat Party from the bench,” and resigns. The Don goes into action, and the Solid Six becomes the Solid Seven.

Then, in late-2022 or mid-2023, Thomas & Alito, each of whom will by then be in his mid-70s, come to DJT (yes, there will be a second term), announce their plans to retire, thereby giving the Don time to line up their respective replacements. Thomas & Alito condition their retirements on the Don’s promise to replace them with people in the mold of Scalia, with each nominee to be in his/her mid-40s. In time Roberts does the same, though he’ll be coming to President Mike Pence. The Solid Seven remains solid for decades.

No! Thomas is the best judge on the court! We need him to stay for at least another 100 years (200 would be better but everyone deserves a rest eventually)! Can’t we get rid of Roberts earlier, instead?

Surely you are not surprised by this example of FakeNews.

If the media weren’t a propaganda wing for the DNC, I would imagine support for him would be slightly higher. Most Democrat voters are so tied up with hatred of Trump that they will never accept a single thing he does, other than the break in taxes – they never mind more in their pockets.

I still think that is backwards. The DNC is the political arm of the MSM, not the other way ’round.

Oh, forgot – when a Democrat is confronted with the increased income from the tax break they don’t agree, they simply ignore the issue and say nothing.