“In many ways—and I don’t mean to sound overly, I don’t know, hyperbolic on this—Trump and Osama Bin Laden have a tremendous amount in common” 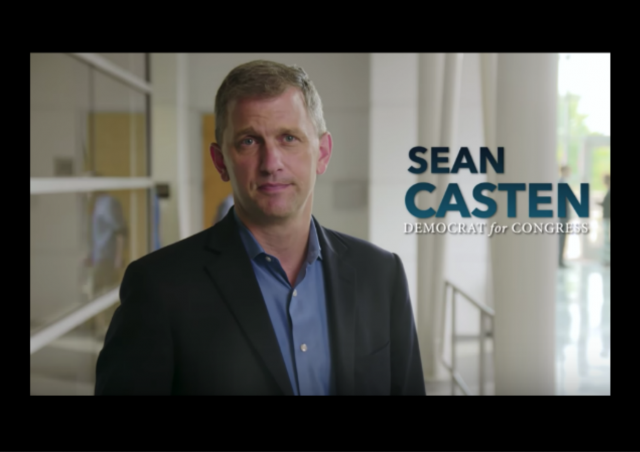 Is there a Godwin’s Law, but for bin Laden? If not, there should be.

The Washington Free Beacon obtained audio of Casten making the terrorist comparison. It was recorded during a February meeting with voters.

“In many ways—and I don’t mean to sound overly, I don’t know, hyperbolic on this—Trump and Osama Bin Laden have a tremendous amount in common,” Casten said, according to audio of a February meeting with voters that was obtained by the Free Beacon and can be heard below.

Casten, a “clean energy entrepreneur” who emerged on top of a tight primary in Illinois’ sixth district in March, made the bizarre comparison after he was asked by a voter for his plans to advance gun-control legislation if he were elected. The comment was part of Casten’s explanation that gun-control opponents, whom he appears to be comparing to al Qaeda supporters, are what will keep gun-control legislation from advancing to the House floor.

“They have both figured out how to use the bully pulpit to activate marginalized young men,” Casten said. “Every demagogue has done this—find a group of angry people and give them something to be angry at.”

You can listen to the audio on the Free Beacon’s site by clicking here.

They just can’t help themselves. Speak disparagingly about President Trump and drag through the mud those who voted for him. Moreover, if there’a an angry group who is angry not about something but someone, it’s the loony left.

notamemberofanyorganizedpolicital in reply to DieJustAsHappy. | August 30, 2018 at 9:28 pm

How sick the left has become. Let them move to Venezuela and re-do paradise, instead of trying to bring the nation down for the rest of us.

Enough of these corrupt people: they’re literally trying to destroy our way of life for profit.

I think that Sean Casten is a lot like Jeffrey Dahmer.

Yeah – clearly what he meant was you can smell those Second Amendment believers in every Walmart…..it’s a shame they can’t put on shoes and get some dental work and join the smart people with good hearts…

Going on Twitter is not the equivalent of highjacking airplanes full of passengers and crashing them into buildings.

Wait; I thought Trump was Hitler!
It’s so hard to keep up with these things.

If you would take the time to read Daily Kos, youwould understand that Trump = Hitler on Mon / Tues / Wed / Fri / Sun. On Thursday, Trump = OBL. On Saturday, Trump is the devil incarnate. It’s all very organized.

That’s it, keep doubling down on that disastrous decision by Bill and Hillary Clinton to run a character assassination campaign instead of talking about the issues. It will work just as well as it did the last time.

And the left believe that they are not insane. They fully believe the crap they are pedaling these days. Of course they had practice when Bush was President, so full derangement wasn’t all that far off.

I don’t want to sound hyperbolic, but the Democrats and the Khmer Rouge have a lot in common.

This is the same group that can’t decide which gender they are or how to split up the committees unless you self declare or something? Re open the insane asylums, we need them more than ever.

Democrats on Saturday adopted new language to allow gender self-identification in the party’s rules and charter.

The move came during the Democratic National Committee’s (DNC) summer meeting in Chicago and adds language inclusive to gender nonbinary individuals. Under the new rules and charter, DNC committees that were once required to be divided equally among women and men must now account for members who don’t identify with either gender, CNN reported.

DNC Chairman Tom Perez told CNN in a statement that the rule change was meant to enforce a greater aura of inclusiveness within the Democratic Party.

“At the root of our diverse party is a commitment to inclusion and opportunity,” Perez told CNN.

“By adopting this amendment, the Democratic National Committee is ensuring every Democrat feels welcome and embraced for who they are. This action reaffirms our solidarity with the LGBTQ community and challenges governments, employers, and organizations across the country to do the same.”

In NY poll workers are supposed to work in teams of two: one Democrat and one Republican. But there aren’t enough Republicans, so some Democrats are assigned to play identify as Republican that day. Seems to me they could work their committees the same way. “Oh dear, we all seem to be men. OK, you, you, and you, for the duration of this meeting you’re women. Next meeting you can be men and we four will be women.” Or, even more simply, “All seven of us are now non-binary, so the variation between men and women on the committee is zero.”

Sex isn’t always binary. There have been significant periods of my life where sex could be expressed as the square root of -1.

made the bizarre comparison after he was asked by a voter for his plans to advance gun-control legislation if he were elected.

What he seems to be saying, in a fuzzy “don’t-blame-me” sort of way, is no, he has no plans to crawl up on the gun-control cross.

I served in the Navy with people who actually did have to survive under dictators. One of my favorite persons was a child of the boat people.

A pause is necessary. I need to point out that I’m not the only one who served. I’m afraid I sometimes come across as if I’m the only one who ever defended the country, all by his lonesome.

We nicknamed her Low Westwoman. It was a play on words, on her name. She not only didn’t mind the nickname, she was proud of it. When all four foot and change of her would stand on a chair just so she could shout down a leftist all I could do was stand back in awe.

Not putting bumper stickers on their cars bragging about how brave they are confronting some non-existent threat.

Low Westwoman was and is of Vietnamese ancestry, if that wasn’t clear.

If Trump is “literally” Hitler, that would make Pence “literally” Heinrich Himmler. Can anyone imagine a similar scene in 1936 Berlin?

No, Himmler would be Jeff Sessions*. Pence would be Deputy Führer Rudolf Hess (Deputy Führer was a Party position and Hess was succeeded by his Deputy Martin Bormann – officially Party Secretary) or more accurately he would be Hermann Göring Vice-Chancellor of Germany.

* I made myself laugh at that pairing.

Sean Casten and Geobbels have a lot in common.

you have to understand, the Democrats are fantastic at projection. if they accuse someone of doing something you almost be guaranteed to be thinking of/ or doing it

I think the new Godwin’s law should be “racist, homophobic, misogynist.” As soon as a liberal starts to lose an argument, they accuse the other person of being RHM so as to negate anything the other person has to say. Hopefully a huge settlement in the Oberlin case will take the “R” out of that equation.

Yes, it’s perfectly true that Trump has a lot of things in common with bin Laden. So does every human being. But these are not the things that made him bad.

Every once in a while I go to a liberal news site and read the comments to the articles. It is beyond amazing the level of hate, paranoia, and outright fantasy, exhibited by many of these people. The claims they believe to be facts do not even begin to come close to anything in the real world. In forums such as this one we argue over interpretations, misunderstandings and such, that are based in the real world, but the Left refuses to argue over anything for to them it is a certainty that Trump does all sorts of horrific things. (If Trump says it’s raining cats and dogs, they use this as proof positive he is a liar for dogs and cats are not falling from the sky.) The degree to which they are out of touch is very scary. To them, Trump is indeed OBL and worse for this is what they hear and read on a daily basis from their news media and such.

Casten is a doofus.

Come on voters: stop monkeying around.

It sounds to me like you are ape-ing another campaign.

But, spend freely. Don’t be niggardly with those campaign congtributions. Just make sure the campaign manager says your funding is in the black

“Something in common?”
Except that Osama bin Laden, and Buraq Hussein Obama, too, hated the United States. President DJT feels exactly the opposite.

Elect me and I’ll build more mental institutions to house these loons.