Husband claims Stormy committed adultery and filed a restraining order against her. 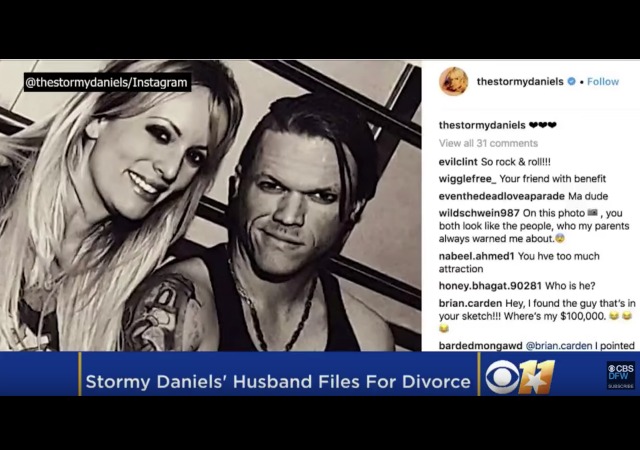 I guess the limelight strayed too far from Stormy Daniels and her lawyer Michael Avenatti because he announced, unprovoked, that Daniels’ husband filed for divorce.

He tweeted this information to his almost 700K followers on Twitter and asked people to give Daniels privacy, which is something she would have if he hadn’t announced it.

My client Stormy Daniels and her husband Glen have decided to end their marriage. A petition for divorce was filed last week, the accuracy of which is vehemently disputed. Stormy’s daughter remains her number one priority. She kindly asks for privacy for the sake of her family.

Here’s the twist. As I was writing this piece Stormy tweeted out that she doesn’t want privacy.

I don’t need or want privacy. I want truth. And it will come out. I’m not afraid.

This is Daniels’ third divorce.

The TRO application also requested that Daniels be restrained from withdrawing or transferring any of the couple’s assets, and that anyone “employed in the adult entertainment industry” be kept away from the pair’s daughter.

A judge immediately granted Crain’s TRO, awarding him exclusive use of the family home and barring Daniels “from possession of, or access to” the couple’s child.

In an affidavit, Crain alleged that Daniels recently purchased an airplane ticket so that the couple’s daughter could join her on a tour of U.S. strip clubs. “This will involve the child being on her tour bus with other adult performers and producers,” Crain charged. “This will place my child in eminent threat of serious and immediate physical or emotional harm.”

A District Court hearing is scheduled for July 27 to determine whether the TRO should be converted into a temporary injunction pending a final hearing.

Crain and Daniels wed in 2015 and have a seven-year-old daughter.

Yeah, I don’t know how much more proof we need that these people want attention more than anything. No one reported on this divorce until Avenatti tweeted about it.

“She kindly asks for privacy for the sake of her family,” he says after announcing her previously unheard of divorce to his 639k followers. https://t.co/2yFTNtLJyr

Privacy? No one even knew she was married until you popped off again. Don’t you have any ambulances to chase today Mikey? #Basta

I prefer Lindsay Wagner or Pam Dawber… Goldie Hawn. “Stormy” does nothing for me, thank goodness!

As this plays out, I strongly suspect that “Stormy” is going to powerfully regret all the attention she has called to herself over the last several months. She was the MSM’s toy for a brief moment; now she and her life are headed to the wastebin, and all of her old “friends” will have vanished with the breeze.

Oops, I guess the Playboy model has faded back into the shadows again. That will teach her dare to steal Stormy’s thunder. Looks like Avenatti has not finished his quest for the limelight. What will he do when Stormy finally tells him to take a hike? Become her stalker? No problem there, he already is.

That, right there, is a VERY interesting legal question.

Is it adultery if the parties agree to the act of sex outside the marriage for both because of the ACT of sexual intercourse itself, or does it only become adultery when one of the parties (allegedly) has “unapproved” sex with a third party?

The answer, I’m sure, will be litigated EXTENSIVELY in this cause of action.

There was a “shocked Cats” jpg floating around twitter yesterday, cats reacting to news that Stormy was accused of adultery. One of the funniest pics I have seen in a while!

The standard doesn’t change. They commit adultery on a daily basis.

The Judge in this case isn’t going to care, especially given the acknowledged professions of the parties (not a commentary on the Judiciary, a comment on THIS particular Judge).

Now, if it was a DIFFERENT particular Judge hearing this case, THEN it would have become important.

I can say with certainty right now, that both the parties in this case had better be thanking whatever God they worship that they didn’t get a different Judge, because THAT Judge would have read them ALL the riot act.

Great. Devoting blog space to the happenings of a whore.

Why bring Hillary Clinton into this?

I must admit I’m disappointed with Trump. I thought he had better taste in women.

James: Fur sure. Drag a $20 bill through a trailer park –

Hillary: Shut up, James. Not helping!

Maybe, just maybe, given the relatively low payment to -this woman, or non-payment, or something, is because it is just go away money not cover up money.

The wealth that Trump has would seem to have pushed hush money up a lot more, just like that Hedge Fund guy, who was paying over a million. Why would she sell it so cheap… well, I mean her non-silence.

Of course we don’t know if he did or didn’t have an affair with this not so fair woman, but damn, if he did, yeah it’s eww type territory.

I’m still wondering why she is suing to get released from the agreement to keep hushed up, when all she has done is talk and bring in a sleazy lawyer to do nothing but talk about it. And unless you have photos and/or a stained dress, how does one prove it, let alone the person who is accused prove a negative? Of course these days any woman can accuse a guy of just about anything sexual and it ruins his career as it is to be believed instantly. Even if it happened decades ago.

Commentary from a Texas standpoint of a practicing Family Law Attorney (me).

In an affidavit, Crain alleged that Daniels recently purchased an airplane ticket so that the couple’s daughter could join her on a tour of U.S. strip clubs. “This will involve the child being on her tour bus with other adult performers and producers,” Crain charged. “This will place my child in eminent threat of serious and immediate physical or emotional harm.”

Simply BECAUSE of the professions of the parties to this case, I’m SURE that this 7 year old has been around “other adult performers and producers” her entire life. She may not have KNOWN it at the time, but I’m SURE there has been the occasional meet-and-greet where people have been introduced as “Mommy’s friend” or “Daddy’s friend.” To think otherwise would be WILLFUL ignorance.

The TRO application also requested that Daniels be restrained from withdrawing or transferring any of the couple’s assets, and that anyone “employed in the adult entertainment industry” be kept away from the pair’s daughter.

A judge immediately granted Crain’s TRO, awarding him exclusive use of the family home and barring Daniels “from possession of, or access to” the couple’s child.

As damaging as this sounds, this is actually standard language in a TRO in a Texas Divorce. It’s usually used as a cudgel to make the other party crazy because they’ve been thrown out of the house (usually without ANY of their stuff), they’re cut off from their child for up to 4 weeks (initial 14 days length of a TRO, and can be extended once for an additional 2 weeks), AND they’re prohibited from accessing any “marital” funds, which means basically they have to live on the money they have in their pocket at that moment (which often is ZERO).

Ms. Clifford is in a position that she can at least support herself on generated cash income quickly if need be, and she already has access to an attorney, although I would not want Avenatti anywhere NEAR a divorce action. Avenatti is too much of a windbag and media whore. Any marginally competent attorney is going to cut him to shreds in a actual contested Temp Orders hearing.

A question for Chuck. Given Avenneiti’s past behavior; the bar complaints, the outstanding judgment and the comments of the United States District Court Judge on his behavior before he withdrew his pro hoc vice application, what are the chances of pro hock vice status for the divorce being denied in Texas?

100%. The Judge in this case is NEVER going to grant him Pro Hac Vice status.

I didn’t realize it until you asked the question, and a stray piece of information clicked, but I actually practice regularly in the Court where this matter is pending.

I know personally the attorney that is representing Glendon Crain. The attorney that Crain selected to represent him has been doing family law trial practice for 45 years, and is VERY well regarded as a no-nonsense, cut-you-off-at-the-knees trial litigator.

I’m thinking about going just to watch the proceedings. It’s going to be a circus.

Is Stormy a TX resident? My first thought when I saw that Husband is accusing Wife of adultery as grounds for Divorce was “what state(s) still have/has grounds for divorce?” Aren’t all states “no-fault” already?

I hope I hear nothing further about these two pieces of trash and their poor daughter!

Texas is also a “no fault” state.

You can “plead” fault in the breakup of the marriage in order to try to get “unequal” distribution of the marital assets, but 99+% of the Judges don’t care about adultery anymore.

Now if you can show a pattern of domestic violence or child abuse, THEN you’re MUCH more likely to get an unequal distribution.

Years ago, I DID manage to get a Judge to grant an unequal distribution based on a claim of adultery by the opposing party husband. Partially in Jest, I said “your honor, I offer this acknowledged child not of the marriage born to another woman during the course of the marriage as exhibit A.” The Judge made a wry comment about it being an improper use of Res Ipsa Loquitur.

No, Glendon Crain is a Texas Resident.

“She kindly asks for privacy for the sake of her family.”

My first thought was the parody site Duffelblog on the concept that perhaps soldiers should not marry strippers if they’re looking for a marriage that lasts. More than an hour.

Stormy and her husband needed some money.

Her husband begged her to pull the train, and avoid Trump.

She wouldn’t listen, and now they’re getting divorced.

More than likely he has an airtight case.

Stormy, hubby and Avenatti all appear to be low life.

In a property settlement who gets all the silicone they purchased during the marriage?

If Clifford is the “sole owner” of her brand / likeness / business entity (which I think is likely because her career pre-dated the marriage to Crain by about 5 years), then Crain can make a claim for “reimbursement” of the marital estate for any income that was generated by the parties, which was then used for the enhancement (no pun intended) of Clifford’s “separate property” (her business entity). Same with any management or business acts that Crain did to advance Clifford’s career that he was not compensated for (time, toil and effort spent enhancing the Separate Estate at the expense of the Community Estate).

If instead Clifford transferred some of the business to Crain upon or during the marriage, then it may now be a “community asset” which Clifford may have to “buy out” Crain, at whatever the estimated value of her business entity will be.

The husband looks exactly like the drawing of the guy who Stormy said harassed her years ago. Seriously, take a look:
https://www.boston.com/news/politics/2018/04/17/stormy-daniels-sketch-tom-brady