Police: “We do believe that we were minutes away from a potentially deadly situation” 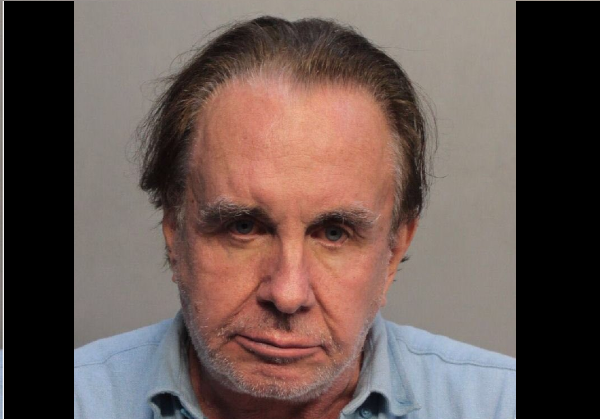 A 72-year-old Miami man has been arrested and charged with attempted murder and attempted arson after police received a tip.  During a subsequent search, they found a storage room containing “28 containers with gasoline, sulfur powder, and potassium nitrate.”

Walter Stolper was facing eviction from his condo and had reportedly stated that he wanted to “kill all the Jews” in the building.  Police found “Nazi reading material and a Swastika” in Stolper’s condo.

A Miami Beach man upset with his Jewish neighbors after he was evicted from his condo reportedly vowed to burn down the building with “all the f***ing Jews.”

“We do believe that we were minutes away from a potentially deadly situation,” explained Miami Beach Police spokesman Ernesto Rodriguez.

Witnesses told police that Walter Stolper, 72, had shown aggression toward some of residents and board of directors of his building at 56th Street and Collins Avenue.

“This is an individual that our intelligence unit intercepted with two filled gasoline tanks as he was coming back into the apartment building. Already in the building, he had disposed of eight additional gasoline canisters down the trash chute from the 15th floor,” said Rodriguez.

When officers arrived at the building, they could smell the gas. A resident also complained about the strong odor of gas in the hallways and elevators.

“We received a tip yesterday. He had been acting strangely saying a lot of derogatory comments towards the Jewish community. We later learned there was a pending eviction for him,” said Rodriguez.

. . . . Stolper was arrested and charged with attempted murder and attempted arson.

2/2 – Stolper was stopped with two additional gasoline containers in his possession. We are confident the work of our detectives prevented an imminent crisis at 5601 Collins Avenue.

UPDATE: Detectives have located a storage room linked to the defendant. The room located within the same building contained 28 additional containers with gasoline, sulfur powder, and potassium nitrate. He has now been charged the with Attempted Murder. pic.twitter.com/9cXvNkWwiU

Stolper’s alleged plan was diabolical and apparently intended to cause maximum damage and loss of life.

“Inside of the unit, we found Nazi reading material as well as a swastika. This again is a very, very, very dangerous individual. Our detectives also seized two firearms,” said Rodriguez.

Police also said he had purchased two electrical fans to fan the flames and cause as much damage as possible. He also purchased padlocks to place on a nearby firehouse to keep firefighters from extinguishing the flames.

Stolper, police say, also destroyed the smoke detector in his condominium, which was hardwired into the building’s fire system.

According to police, Stolper had already set his plot into motion when he was arrested.

According to police, Stolper had already poured gasoline down the garbage chute from the 15th floor and planned to ignite the gasoline and use two electrical fans — found in his apartment — to further fan the flames and cause maximum damage.

The arrest report also states he had bought padlocks and planned to place them on the firehouse to prevent fire officials from responding.

A storage facility, searched later on Friday, turned up 28 additional containers filled with “gasoline, sulfur powder, and potassium nitrate,” the Miami Beach Police Department said in a statement. Sulfur and potassium nitrate are used in explosives, and are the main ingredients in gunpowder.

Um, no. The reading material is evidence of his motive.

And his political party is?

And his political party is?

Calls for speculation. There is nothing in the evidence before us to give us even a clue about his political affiliation if any. As tempting as it might be to guess he is a Democrat, there’s no foundation.

Not really, I read Mein Kampf to understand the enemy. I read the Turner Diaries for the same reason. Today, I routinely scan sites like Democrat Underground and Vox Populi just to keep myself exposed to all POVs.

Someone who shared his view may have loaned him the book thinking it would interest him. Maybe he didn’t? Not all antisemites are Nazis.

This is the argument I normally would have expected you to make, based on your history here. So although I think it likely he was a Nazi wannabe, since you weren’t staking out your usual objective ground on this topic I thought I would fill the void. Hope you don’t mind.

You are confusing “evidence” with “conclusive proof”. The reading material is evidence; that it may be explained away doesn’t change that.

My bad, when you said “evidence” you meant both valid and invalid evidence… Although now I wonder why you bothered.

“His reading material does and does not prove he was motivated by it” would have been a more accurate but pointless statement.

Will it rain today? Sure, or maybe not.

No, I meant only valid evidence. His reading material is valid and strong evidence of his motive, even if it’s not conclusive.

didn’t think I needed to add statement about sarc or tongue in cheek.
but I forgot tardboy was here.
sorry everyone.

We received a tip yesterday.

Good thing the wannabee arsonist was also a slow worker.

A bit confused about this myself. It seems the tip was received on Thursday and the police arrived the condo at 5:45pm that afternoon. There was follow-up which they did on Friday.
Here’s a link: https://www.miamiherald.com/news/local/community/miami-dade/miami-beach/article214823050.html

How in the world do you thank the person who tipped off the police. Certainly, the police, as well, deserve profound gratitude for their diligence. And, we can give thanks this horrendous crisis in the making was averted and that Stolper will most likely live out the res of his life behind bars.

He also purchased padlocks to place on a nearby firehouse [..] he had bought padlocks and planned to place them on the firehouse

This one threw me for a loop, but it turns out to be a stupid typo either by CBS which ABC copied, or vice versa, or by a third party which they both copied, apparently with none of them doing any proofreading. The Miami Herald link provided by DieJustAsHappy has it obviously correct:

Diaz also told police Stolper bought padlocks and painted them red and told him he had intended to place the locks on the condo’s fire hoses to prevent the fire department from putting out the fire.

That’s funny. From my auto-correct escapades here at LI, I’ll be spell check turned hose to house and the “layers of fact checkers” missed it.

At least he didn’t put locks on any horses. PETA would be rioting in the streets.

Put this guy on the DNC platform committe. Few Democrats will object.

I’m certain there are thousands of journalists working feverishly as I write this to link this guy to Trump.

Yup. Plus, substitute ‘a koran and crescent moon’ for ‘Nazi reading material and a Swastika’ and the left will be twisting themselves into knots screaming ‘islamophobe’ at anyone who dares suggest the ideology had anything to do with motive or criminal activity.

Come now. He obviously couldn’t have been reading the Koran, because if he had the Religion of Peace would have convinced him not to carry out this un-Islamic crime.

Good grief. WTH is wrong with Florida? I think it time the CDC classify ‘florida man syndrome’ as a contagion and issue a public health warning.

I’m thinking this was a person of marginal mental health who flipped out over being evicted. I’ve seen people just as angry over a divorce or being fired.

Sulfur and potassium nitrate are used in explosives, and are the main ingredients in gunpowder.

The Department of Chemistry has asked me to point out, for the record, that the important ingredient in gunpowder—the component which deflagrates and causes the “boom”—is lowly charcoal, the fuel. The KNO3 is just the oxidizer, and the sulfur has surprising little effect.

Well, he no longer needs a condo,housing will now be free.

If the MBPD had not gotten there in time to stop him,this would have been a disaster. That being said, I’m still waiting for the calls for stricter gasoline control. He passed no background check for the purchase and the fact that he purchased this much gasoline in such a short period of time would have raised red flags if there was a gasoline sales equivalent of the NICS. Something must be done. Break out those pink udder hats and march to eliminate gasoline power vehicles. No one needs an internal combustion engine powered vehicle in the electric vehicle age.

Really, though, this guy was a nut. He did this because he had long running problems with the building inhabitants and was being evicted, not because he was a jew-hating Neo-Nazi. If the residents were all baptists, he would still have tried to burn the place down.

On the bright side, the actual Nazis here are so unorganized that they can’t fill 200 seats to hear their Dear Leader.

A recent nazi sympathizer from South Carolina (Greensboro shooting) had to go solo because he couldn’t find Nazi wingmen in his home state.

Richard Spencer was (wrongly) kicked out if gym. But the SJW bitch who reported him and the gym owner are still alive and well.

There is still a slacking BDS movement (I think it’s peaked) and still rampant antisemitism in Hollywood and Academia, so of course – remain vigilant.

But if we had to kill every last Nazi in this country we would be done in time for lunch.