And the Winner is … 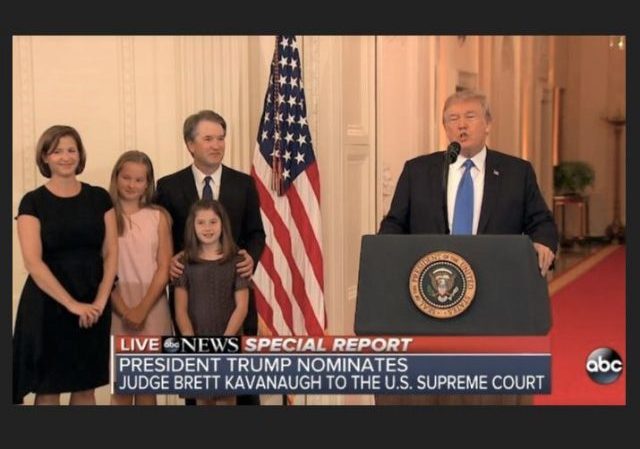 It’s here. What you’ve all been waiting for. At 9 p.m. Trump makes the formal introduction of his nominee to replace Justice Anthony Kennedy on the Supreme Court.

And the winner is …. 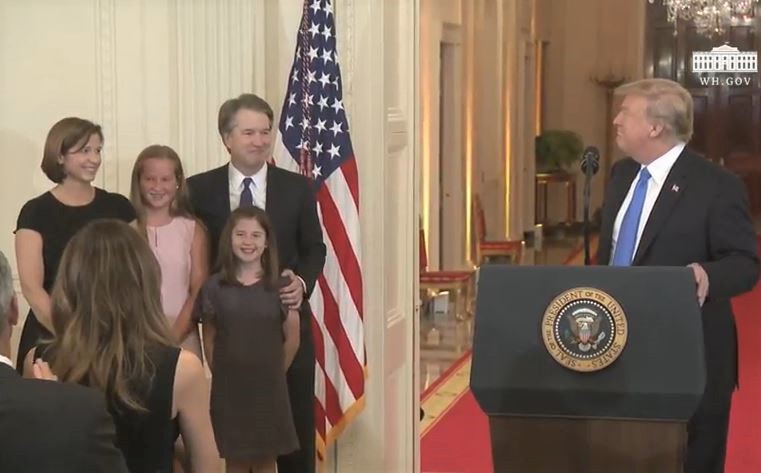 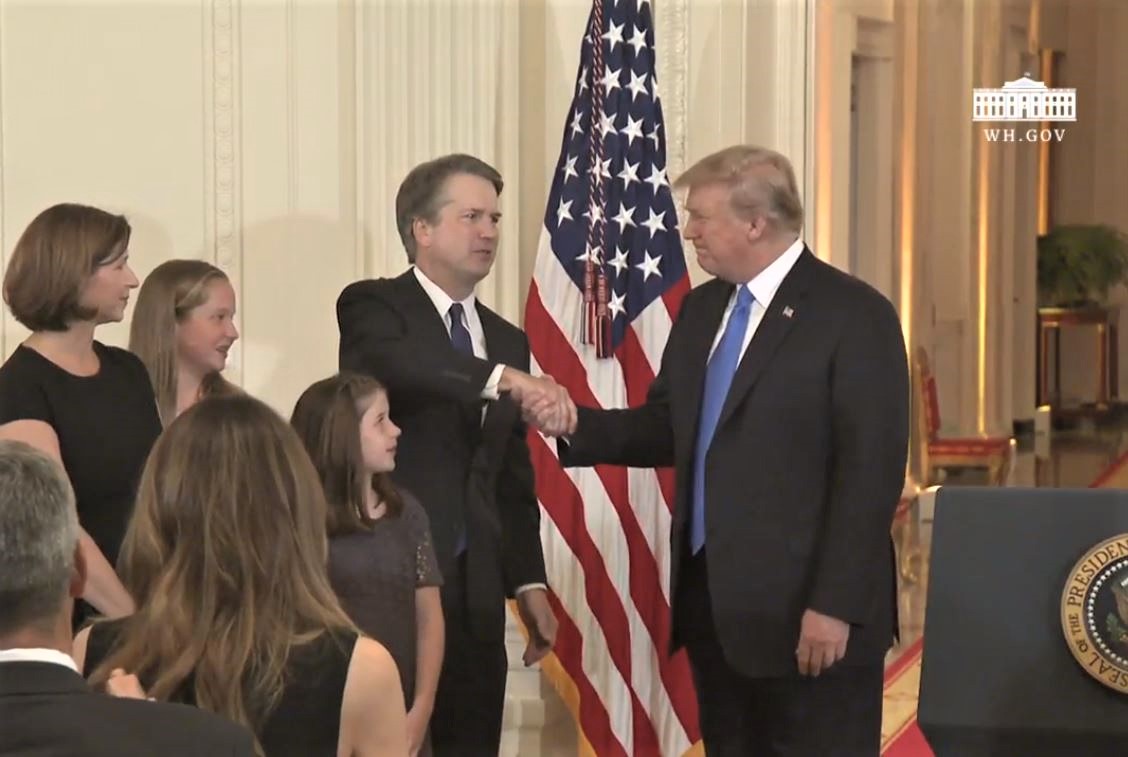 The Judicial Crisis Network has a video ready to go supporting Kavanaugh:

This was my inbox a few minutes before and just after it was “official”:

There are a lot of conservatives right now breathing a sigh of relief that Trump listened to the @FedSoc crowd and didn't screw this up.

Kavanaugh nomination shows Trump Administration is serious about taming the administrative state. His opinions on AdLaw issues already get SCOTUS attention. Now he'll be at the table.

Brett Kavanaugh is a true Second Amendment radical. He believes assault weapon bans are unconstitutional, a position way out of the judicial mainstream, far to the right of even late Justice Scalia.

If Kavanaugh is the nominee, the fever-swamp theory that Trump picked him because he'd protect the president from indictment will gain traction. It's nonsense, and here's why. /1 https://t.co/DMBlrCS422

BREAKING: Trump just announced his nomination of Brett Kavanaugh to the Supreme Court. Anti-abortion. Anti-healthcare. Thinks Trump is above the law. Here's what you need to know to take action now: https://t.co/RnmOSTwHiW #StopKavanaugh pic.twitter.com/P2mtAtQFSW

I will oppose Judge Kavanaugh’s nomination with everything I have, and I hope a bipartisan majority will do the same. The stakes are simply too high for anything less.
Read my full statement on #WhatsAtStake: https://t.co/BYtcB3LWWB #StopKavanaugh pic.twitter.com/5f2Bomxltb

Judge Jeanine Pirro. Please. The SCOTUS could stand some pizzazz!

I could support that.

I could support that.

There’s a lot to like, but I’d like some in-depth analysis with Andrew Branca regarding the Richard DiGuglielmo Jr case before I would support her.

Do we get a fireworks display with the Big Announcement?

Maybe those ones Hillary! didn’t use.

You won! I hope you wagered well.

The bottom video has a count down clock.

“I felt a great disturbance in the Force, as if millions of lefties suddenly cried out in terror and were suddenly silenced. I think something wonderful has happened.”

It’s Roger Norman a plumber from Omaha, Nebraska. He said, “I can read simple English and shall not be infringed is pretty easy to understand. What’s the big deal.”

Hmm. no one is talking Willet.

The sky didn’t fall either!

Dang it didn’t matter who Trump nominated. Old Rachel Madcow’s head was going to explode. I thought about watching MSNBC later tonight to get the full Madcow rant, but I’ve chickened out. My stomach is a little weak tonight, so I’ll have to pass on Rachel.

The pontificating from the Democrats during this process should be spectacular. I cannot wait until California’s Kamala Harris weighs in…it should be comedy gold.

He’s better than anybody Hillary would have nominated, but just because he says assault weapons bans are unconstitutional doesn’t mean much for gun rights. Plenty of allegedly conservative judges will let anything go short of an actual ban, and wouldn’t do anything about the judicial revolt against Heller.

“…but just because he says assault weapons bans are unconstitutional doesn’t mean much for gun rights.”

Of course it means “much” for gun rights. It means he understands the meaning of “shall not be infringed”.

Randian, more information which I hope will please you:

“It follows from Heller’s protection of semi-automatic handguns that semi-automatic rifles are also constitutionally protected and that D.C.’s ban on them is unconstitutional. (By contrast, fully automatic weapons, also known as machine guns, have traditionally been banned and may continue to be banned after Heller.”

FYI and forgive the intrusion on a different topic, but as expected, the Flores decision judge has refused to accept Sessions’ request to relieve the federal government of the settlement requiring “catch and release” for children, pouring great scorn on current policies and urging the renewal of prosecutorial discretion for the parents to release them, too. No one should be surprised, and I am not, but at any rate, this is news so just mentioning it.

And do you have the current score of the Mets game?

This is easily solved by a sticky note with the words; “Now enforce it!” delivered to the judge.

It’s been over an hour since The Big Announcement.

… Nope. Still not seeing any problem with this.

It’s raining on my clean truck. Does that count?

Now Kavanaugh will need a replacement on the Court of Appeals for the DC Circuit.
How about Philip Hamburger?

I wonder when the idiot left will realize that quoting the Declaration of Independence and calling it the Constitution isn’t helping their cause?

They also tend to look only at what the Amendments say; never the body of the Constitution.

I’m impressed, but not amazed. I really thought Trump would pick the Catholic female to double-tweak the Leftists. I guess next time.

This is going to be good. The Left is already putting out press releases condemning Trump’s selection of ‘Her’ Maybe they shouldn’t have pre-written so many press releases and actually waited, huh?

You’re right, next time, and she’s doing a good job where she is. This is a very solid pick.

@OrinKerr
There are a lot of conservatives right now breathing a sigh of relief that Trump listened to the @FedSoc crowd and didn’t screw this up.

Oh, screw you, #NeverTrumper Orin Kerr. When are you idiots going to realize that Trump has a better head than you? You think you #NeverTrumpers are so smart and that Trump is the idiot. How many #NeverTrumpers have had Trump’s success in business and learned the lessons that he’s applying to government doing things you all wanted done, didn’t have the balls to do, and were content with blathering about? Bah, humbug, stupid #NeverTrumpers.

In the past, I have heard Never Trumpers/Dems say that PDT ONLY has $10B to his name.

I always have a good chuckle over that.

He’s probably the first President in a long time who has had decades of successful executive experience.

You’re off by an order of magnitude. There’s no evidence he’s worth more than $1B, which is about what he’d be worth if he’d simply put his inheritance in an index fund.

Several sites, including Forbes, place his net worth between 3.1 and 3.4 billion.

Note that this merely means you are wrong, being wrong doesn’t make you a “lying libelous liar”. So try to return the courtesy next time one of us is incorrect.

That several sites say something does not mean there is any evidence to support it. They merely repeat his boasts, which have been proven in the past to be false.

Is there any actual evidence to support your claim that the net worth is one billion? Does it really matter if it is one or ten billion?

No, he doesn’t have any evidence. It’s just the same old nevertrump canard they trotted out a couple years ago. It’s just a number intended to prove he knows nothing about business, so they can say he could have put his money in the bank and ended up in the same place.

All it proves is the nevertrumpers make shit up.

Yes, they do have terribly high opinions of themselves.

Is this the most conservative of the short list? I read somewhere today that Trump was told he couldn’t get this guy(?) confirmed, which as good as double dog daring him? Or am I confusing him with another?

If so, good tactics. The Dems will “go to the mattresses” on this nom no matter who it is, so no loss going with a true conservative originality.

*Note to those of ill will: this post is not an sideways or longways or anyways advocation of fantasy violence, political violence, or violence of any kind directed at muppets or their ilk. If your faux outrage lasts longer than 4 hours please take your meds and consult your therapist.

My bad, the more conservative choice was another, and Ive already forgotten the name.

Anybody else notice that Chucky Shoemur didn’t even bother to change is tweet other than to add the name of the nominee, its the same thing he has been saying since Kennedy announced his retirement.

*no hobbits were threatened with “fantasy violence” in this post. Except for Hillbi, and he had it coming.

Chris Murphy:
Brett Kavanaugh is a true Second Amendment radical. He believes assault weapon bans are unconstitutional, a position way out of the judicial mainstream, far to the right of even late Justice Scalia.

Only if your chosen definition of “assault weapon” is “any semiautomatic rifle”. But holding that semiautomatic rifles are protected is well within the mainstream, and certainly Scalia would have held so had the question ever come before him.

Thank you hillary klinton. Wouldnt have happened without you.

Runners up: NeverTrumpers George Will and Max Boot, who want to throw the midterms to a Democrat majority. Presumably to thwart monstrous appointments like Kavanaugh to the Supreme Court.

I’m told that we are all going to die. Yes, again. I’m running out of rezzes guys sorry. I can bring 4 of you back this time, maybe 5.

My take on Trump’s nomination of Brett Kavanaugh to the High Court? Watching the ceremony last night, I couldn’t help but feel relief that Joe Biden was not at the event groping Kavanaugh’s two young daughters.

Democrats made a huge mistake when they failed to accept and to reach out to Trump. They should have kissed is tail and begged to be included in his administration. They still do not understand that all of what is happening is their fault.