Unemployment rate went up “largely due to 601,000 Americans entering the labor force.” 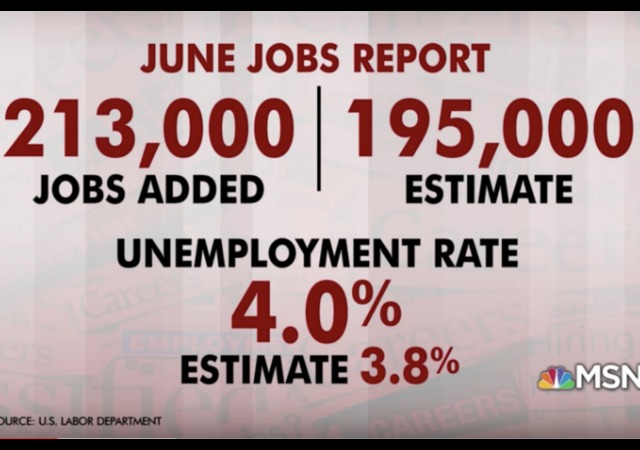 All in all, it’s not a bad jobs report to kick off the summer. The Labor Department’s report shows the economy added 213,000 new jobs in June even though experts predicted only 190,000.

This means job growth has happened 93 months in a row, which is a record.

Unemployment went up to 4% from 3.8%, but that probably went up because of the rise in labor participation.

While many will latch onto the unemployment rate going up, it’s important to note it went up “largely due to 601,000 Americans entering the labor force.” June saw work participation rise to 62.9% from 62.7% in May.

The unemployment for women and Hispanics went down: 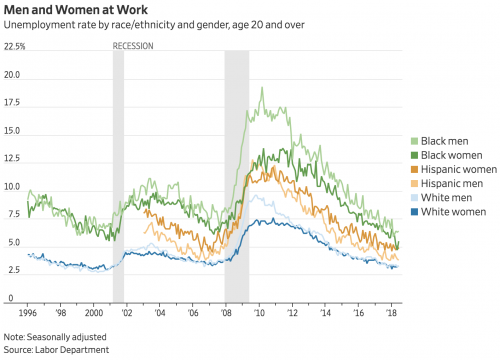 I know the media (and myself) have grumbled about the trade war President Donald Trump has waged with tariffs. The jobs report showed that manufacturing added 36,000 jobs in June compared to 19,000 in May. According to Capital Economics, “the strong pace of hiring suggests ‘that escalating trade tensions are so far having little impact on the factory sector.'” Martha Gimbel, director of economic research at Indeed, said there there’s no sign in the June reports that the tariffs have slowed down job growth. That may change in the future, though.

The Wall Street Journal has more:

The bulk of June’s hiring was in the durable goods sector. Over the past year, the manufacturing sector has added 285,000 jobs.

One particularly bright spot last month was professional and business services, where payrolls rose by 50,000 in June. Over the last year, that sector has added 521,000 jobs.

The manufacturing labor market continued to be strong, adding 36,000 jobs, mostly in durable goods. The secor has added 285,000 jobs in the last 12 months.

While the prime age participation group remains high, it slipped a little in June.

Wages went up 2.7% from a year ago and .2% from May. This is also good when it comes to inflation:

Treasury analysts are reading the latest jobs report as a largely benign one as far as inflation goes.

Average hourly earnings rose 0.2% in June from the month earlier, less than the 0.3% that economists surveyed by the Wall Street Journal had expected. Investors have been closely watching wage growth to gauge whether inflation could be accelerating–something that some fear could prompt the Federal Reserve to pick up its pace of interest rates increases.

“A mixed bag to be sure, but from an inflation perspective the release was consistent with the bullish flattening currently underway in the Treasury market,” said Ian Lyngen, head of U.S. government bond strategy at BMO Capital Markets, in a note to clients.

Concur that rise in labor participation probably accounts for slight uptick in unemployment rate. I studied economics under an old New Dealer official in the early 60’s. He was at the tail end of his academnic career. But the prevailing view of economists at the time was that a 5% unemployment rate constituted “full employment”. The idea was that people were leaving old jobs and looking for new or better jobs in a healthy economy. That sort of “churn” usually equaled about 5%. Looks like some folks who had had a forced “early retirement” and sat on the sidelines as a result are now getting back in the game. Another “win’ for the “Cheeto Bandit” as the Left calls him. And certainly a win for the working man and woman.

With the fact that Democrats are professing that the employment numbers are a negative and proclaiming that “it’s a setup for a winner takes all” policy.
Well let me be a part of the program where “a raising tide, rises all boats”. Even if mine is only a dingy with a set of oars for which I paid for and own!

There are plenty of idiots who believe the b.s. put out by the left. You CAN fool some of the people all of the time:

Nancy Pelosi Trying To Convince America That Having More Jobs Is A Bad Thing:
https://www.redstate.com/brandon_morse/2018/06/01/nancy-pelosi-trying-convince-america-jobs-bad-thing/

Just yesterday I was reading from CNBC:

Private payrolls miss expectations as companies can’t find enough people to hire
Jobs in the U.S. grew by 177,000 in June, ADP and Moody’s Analytics say, while economists polled by Thomson Reuters expected a gain of 190,000.

…essentially bemoaning the terrible state of America’s crippling labor shortage. Even respecting that there is a difference between jobs and “private” jobs, the estimates were only 5000 apart. I’m left wondering “What happened…?” in this context.

That came from CNBC. Imagine how damaging to the left the real number must be?

There is a pent up large number of folks returning to the labor force who had left and quit looking.

Look at what the unemployment rate REALLY is, compared to the cooked numbers of the last administration.

Just the fact that folks are now coming back to the labor force is a good sign. That will encourage more to return. Fortunately we are able to put them to work.

Couple hundred thousand this quarter alone finally awoke from their depression and are registering at employment offices, applying to trade schools, ask to be back on the bench.
$700/month social security disability payment is no way to survive even if Obama did open the gates on such.

Wonder how many marxists went on disability due to the fact that Trump won and they couldn’t handle reality?

Today comes horrible news that wages have ticked upwards for 2 quarters in a row, and firms are now embarking on paid training courses. In my State, the construction industry unions are now re-charging their journeyman training programs (tough courses for specific trades such as carpenters, electricians and plumbers equivalent to the old vocational schools that once populated America).