If he stays then he’ll “be among the longest-serving” chiefs of staff in American history. 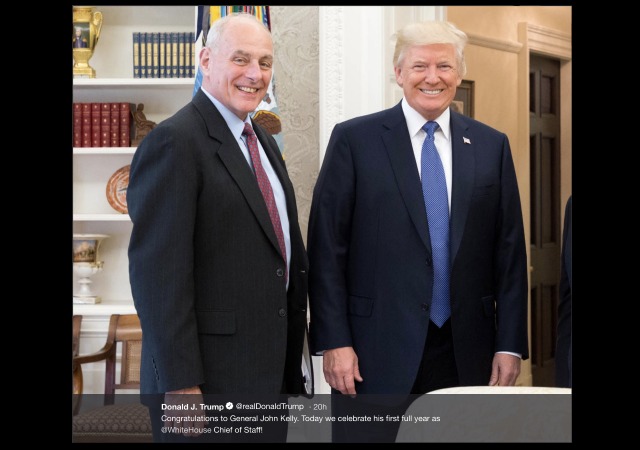 President Donald Trump’s staff is constantly revolving and the left had set its eyes on his Chief of Staff John Kelly with reports that Kelly is frustrated and wants out. They even posted pictures of Kelly with a frustrated face supposedly for Trump.

But now The Wall Street Journal has reported that Kelly has accepted Trump’s request that he stick around through 2020:

White House chief of staff John Kelly told staff on Monday that President Trump had asked him to remain in his post through the 2020 election, White House officials said, a request that comes as tensions between the two men have eased in recent months.

Mr. Kelly told staff he agreed to the president’s request, one of the officials said.

Mr. Kelly, who on Monday marked his one-year anniversary as chief of staff, had been widely expected to leave the White House some time this summer.

Mr. Trump in recent months has consulted with advisers about whom he should tap as his next chief of staff, considering as possible successors Nick Ayers, who serves as chief of staff to Vice President Mike Pence, and Mick Mulvaney, who heads the Office of Management and Budget and serves as acting director of the Consumer Financial Protection Bureau.

A White House official cautioned that while the plan is for Mr. Kelly to remain in his post through 2020, unforeseen circumstances could cause the plan to change.

The president has offered conflicting views in recent months on how long he sees Mr. Kelly staying on the job. After The Wall Street Journal reported last month that Mr. Trump was consulting with advisers on successors to Mr. Kelly, a White House spokeswoman called the report “fake news” and said Mr. Kelly said “this was news to him.”

Mr. Trump, asked later that same day whether Mr. Kelly was leaving the White House, replied: “That I don’t know.”

But I was reading that he was about to be shown the proverbial door. How can the pundits and media get it so wro… Never mind.