But will it last? Economists worry that the trade war may dampen future numbers. 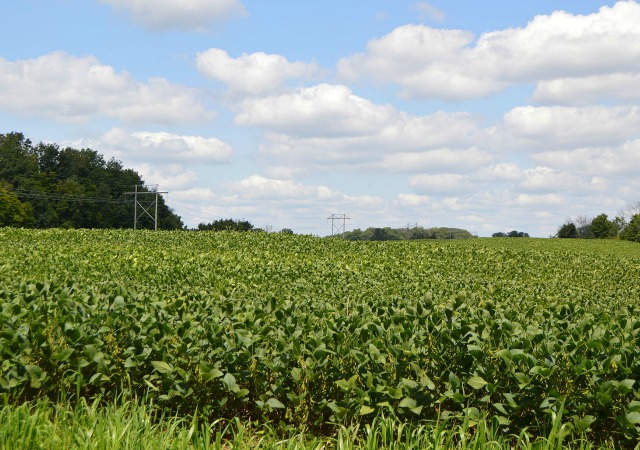 The gross domestic product (GDP) hit 4.1% in the second quarter, up from 2.2% in the first quarter. This is the fastest rising GDP since 2014! 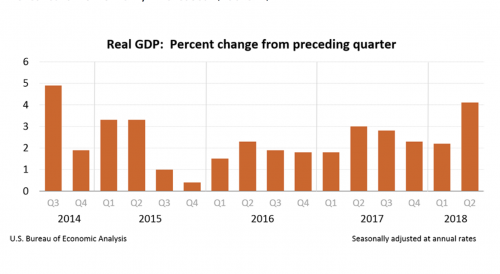 Economists predicted a 4.2% GDP in this second quarter.

While the numbers provide good news, we should remain cautious because of the WHY of the boots. The economists believe that the rise in the GDP mainly came from the tariffs “by motivating farmers, manufacturers, and others to accelerate plans for overseas sales to avoid new tariffs.”

According to The Wall Street Journal, the Commerce Department announced that “U.S. soybean exports surged in the second quarter, delivering an outsize boon to economic growth even as China shifted much of its sourcing to Brazil in response to its worsening trade relations with the U.S.” The publication noted that “[I]nventories subtracted 1.00 percentage point from the quarter’s GDP growth rate” since “trade and inventories tend to be volatile categories.”

Real GDP growth accelerated 1.9 percentage points between Q2 and Q1 (4.1% growth versus 2.2% growth). Most of that acceleration was due to consumption and exports. Nonresidential investment actually **decelerated**. pic.twitter.com/fixBJPPhtL

In other words, the structural story of the tax cuts — firmer investment growth — didn’t happen this quarter.

Note too that in the end, the tariffs didn’t juke the topline stats as much as expected: the one-time boost to GDP from export acceleration was more than washed out by the headwinds from inventory reduction.

In other words, one story that fits the data is that firms didn’t ramp up new production in anticipation of the tariffs, they just rushed to export their existing inventories. Doing this has a net impact on GDP of zero from an accounting standpoint.

Here’s another explanation from Bloomberg. The market doesn’t believe this growth is sustainable.

The U.S. economy is growing at the fastest pace since 2014. https://t.co/ojfrPKKilE But here’s something odd: 10-year Treasury yields are dipping lower in response, as are 2-year yields. This is not the market reaction you’d expect from this headline. pic.twitter.com/Zt8LgwYIMw

The yield curve is flattening slightly. The market doesn’t believe this pace of growth is sustainable even over the near term. That’s the implication here.

As a libertarian, many people ask me why I’m so anti-16th Amendment. I explain that if people keep more of their money they can spend more. The only way to boost the economy is for consumers to pump money into it.

The power of the consumer!! This report backs up what I’ve been saying for many years:

Strong consumer spending helped boost growth alongside trade. A low unemployment rate, steady job and wage growth and the late-2017 tax overhaul may have encouraged spending by consumers and businesses in the second quarter. Consumer spending, business investment and government spending all rose.

Consumer spending accounts for more than two-thirds of total economic output. Friday’s report said personal-consumption expenditures rose at a 4.0% annual rate in the second quarter, the strongest rate of growth since the fourth quarter of 2014. Spending on durable goods alone contributed 0.64 percentage point to the second-quarter rate, the Commerce Department said. As Americans spent more, they saved less. The personal saving rate was 6.8% in the second quarter, down from 7.2% in the first.

The weaker points of the report belong to business spending and housing. Business spending “contributed almost 1 percentage point to growth though the 7.3 percent pace was slower than the first quarter’s 11.5 percent.” Purchasing of equipment went down to 3.9% while “intellectual spending slowed to 8.2 percent.” Housing “fell at a 1.1% rate in the second quarter.”

Can you imagine the raging hard ones these know nothing fuck nuts would have had if these numbers had been recorded during the reign of the black baby jesus?

These morons would have been blowing their loads over each other to out do their adoration for the man child in chief!

But no…instead we get what we are getting now…gnashing of teeth and no doubt much collusion around how to couch their words carefully so as to not give the impression that they are saying positive things about the President!

mailman: Can you imagine the raging hard ones these know nothing fuck nuts would have had if these numbers had been recorded during the reign of the black baby jesus?

Gosh. You’re right. The last time the quarterly growth rate was this high was way back when. Who was president at the time? Grover Cleveland?

locomotivebreath1901: Your substance is agreeable

Can anyone help mailman out on this?

mailman: Can you imagine the raging hard ones these know nothing fuck nuts would have had if these numbers had been recorded during the reign of the black baby jesus?

Who was president the last time quarterly growth was this high?

Dood. Seriously? Your substance is agreeable, but let’s keep the language acceptable to a family friendly venue. Thanks.

Meanwhile he ran up 1 Trillion in new deficits in 1 year (for all of you that opposed the Obama stimulus).

Thanks Mighty_WHrIGHTY. Knew is was Grover Cleveland or that other guy, but couldn’t remember which.

Sadly, no, those numbers were revised after a few months, Obama was an economic disaster.

rdmdawg: Sadly, no, those numbers were revised after a few months

There was some bump on exports as vendors and customers moved to avoid higher prices due to tariffs. Furthermore, the government is running bigly deficits, so some stimulus is expected, even though the economy is running near capacity.

At this point, there is nothing remarkable about the current quarter in terms of the expansion, which started early in the Obama presidency.

It’s more accurate to say “McConnell, Ryan, T-rump” tax cuts. They would never have happened without the first two, and had little to do with the last but that he signed them.

But full marks to doing anything right!

In other words, one story that fits the data

And that’s the story of all of this—post-hoc rationalization of some measured figures. It’s no more scientific than the TV ad with the line “Honey, it must be the Crest!” But I rarely see it ever admitted quite so explicitly.

Another “story that fits the data” would involve secret intervention by the Space Unicorns … doubtless in collusion with the Russians. Once in this game, the possibilities are endless. And all very entertaining. But like all wild-ass guesses, a few of them will be right, most will be wrong.

“But will it last? Economists worry that the trade war may dampen future numbers.”

The concern-trolling is getting thick. “Here’s great news, but here is why it’s really bad news.” – CNN

It surely seems like the investment community is really nonplussed by all of the saber rattling on tariffs and trade so far. But they may reach a breaking point.

It’s funny to see almost all of the media headlines and subsequent articles suggesting it is only a match to Obama’s 2014 result and maybe not as good. Or something….

While a 4.1GDP quarterly increase is unlikely to be repeated quarter after quarter, there is no indication that the increase in the GDP will flat-line or retreat into negative numbers, anytime soon. Also, in the last decade, Q2 GDP rates tend to be the highest of the year, for some reason

Now, the disturbing thing about this is the report from the BEA. It “revised” GDP indicators and analysis going all the way back to 2012. In nearly all of these revisions, the GDP growth rate was increased. While the accuracy of these revisions may be accurate, it tends to downplay the accuracy of the BEA’s analysis. I think that I’ll just keep on keeping on and see what happens with the economy.

How does one “rush to sell existing inventories” except by slashing the price? For that matter, how do you “rush to sell” without the buyers being mentioned even once? (Do a CTRL-F. “Buy” and “buyer” are nowhere to be found, the closest is ‘…and others’.) It comes off a little strangely.

Will the mainstream media explain why they want to overthrow Pres. Trump and go back to some liberal that will direct the economy back to that of Obama’s.

Do they want to return to an economy that has high unemployment, low growth and an over-regulating government?

It is not just the Media. Harry Truman said, “If you put all the Economists in the Country end to end, they will all be pointing in different directions.”

Economics is actually ‘the Science of Predicting the Past’. There is no way to run a controlled experiment on the entire economy, so they just gauge their theories on how well they match what has already happened.

“Economics is actually ‘the Science of Predicting the Past’.”

Where did you find this definiton? Economics is about understanding economic phenomena, most of the time using data collected in the past mixed with a bit of educated guessing. It is indeed very much forward-looking and a useful tool for predicting the consequences of goverment activity.

Harry Truman was a Collectivist jerk, worse than FDR.

While you’re at it, you might want to explore Milton Friedman. What he taught me is that economics (market economics) is all about people, and their choices. At least the ones they are left with when government permits.

Both are quite rational.

According to the media this is a racist and violent time all perfectly due to Trump. So I guess they would tell you it’s a small price to pay to go back to “what America is all about….” or some drivel. Most in the media seem to agree that this country OWES the world our wealth and other progressive ideas. At least as I read their opinion pieces and social media comments.

If there were real consequences for repeated failures perhaps they might learn.

There is no other word for this 4.1 GDP except racist! Maybe homophobic or white supremacy.

Economists are merely bystanders as the leaves of the calendar fly by, waiting for an opportunity to tell others what they have observed.

That’s an idiot statement made by fool.

Economists often prevent boobs like Obama or T-rump from imposing enormous harm on an entire economy.

Aside from name calling do you have any constructive comments?

R-Ass, the only idiot statements I see today are made by you.

Yellow Pussy, what is the function of the economic advisors to POTUS? Is it to “watch the the leaves of the calandar fly by”?

Because even a fool like you can do that. So what do they do, and why does the position exist?

R-Ass, no one gives an eff what you think, write, or believe.

Now now Rags, you’re still in a timeout over that tariff nonsense. You can talk about economics again once you admit you were not only wrong, but obnoxiously so.

And while I’m sure the Professor appreciates your concern re his personal life, it would be even nicer if you would do him the courtesy of not doing the poo poo all over his legal blog. Can you try harder to not do the poo poo?

“My family depends on farms and the farm economy, and Trump’s tariffs are hitting them hard. They lean Republican, but that could change by harvest time.”

I haven’t been wrong about anything, Eddy Haskell. You demonstrated lying coward and broke-dick troll.

Why don’t you post a link to huffington post or the democrat underground while you’re at it, proggy?

Do they have stories of how Duh Donald is hurting America, too, you pitiful, disgusting T-rump sucker?

I bet you can find them all over the country.