Democrats sponsoring the bill now say they’ll vote against it. 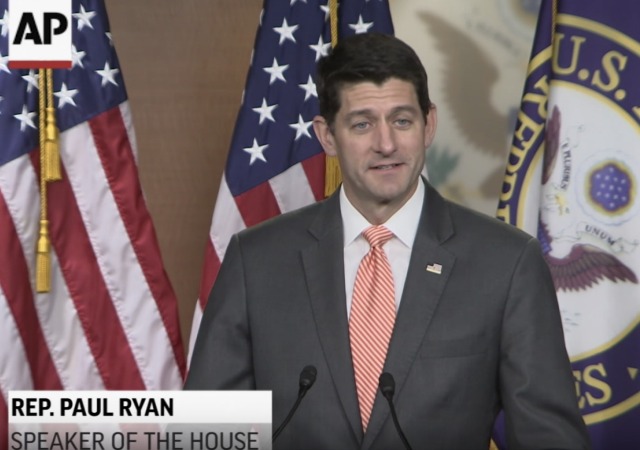 Three House Democrats are ticked at House Speaker Paul Ryan (R-WI) because he plans to bring their ‘abolish ICE’ legislation to the floor for debate and vote.

They’re the ones who introduced the bill, but if Paul schedules the bill, they claim the Republicans are avoiding the issue.

The left has made abolishing ICE a rallying point and is actively pushing Congress to do something.

Democratic Reps. Mark Pocan (WI), Pramila Jayapal (WA), and Adriano Espaillat (NY) introduced a bill on Thursday to do just that. The bill states that within 30 days of passage, Congress shall establish and convene the Commission to Study and Establish a Fair and Humane System of Immigration and Customs Enforcement.” The Commission will then identify the “essential functions of ICE” and then “[D]etermine the most effective means of ensuring that all immigration enforcement functions transferred to other Federal agencies.”

Ryan criticized the bill. From CNN:

“They have really jumped the sharks on the left,” Ryan said. “This is the agency that gets gangs out of communities, that helps prevent drugs from flowing into our schools, that rescues people from human trafficking. They want to get rid of this agency?”

“It’s the craziest position I’ve ever seen,” Ryan continued. “And they are just they are tripping over themselves to move too far to the left. They are out of the mainstream of America. And that is one the reasons why I feel very good about this fall.”

House Majority Leader Kevin McCarthy (R-CA) announced later in the day that leadership intends to bring the bill to the floor. He said the Democrats want to “have a debate about it” and that’s what will happen.

The Democrats get their way so they must be happy, right?

Nope! They’re throwing a hissy fit and the three lawmakers now say they will vote NO on their own bill. From The Hill:

“We know Speaker Ryan is not serious about passing our ‘Establishing a Humane Immigration Enforcement System Act,’ so members of Congress, advocacy groups, and impacted communities will not engage in this political stunt,” the Democrats said in a joint statement.

“If Speaker Ryan puts our bill on the floor, we plan to vote no and will instead use the opportunity to force an urgently needed and long-overdue conversation on the House floor,” it continued. “We will discuss the thousands of families still separated by President Trump’s cruel zero-tolerance policy, the 800,000 young people whose lives have been thrown into turmoil by the President’s decision to end DACA, and the abuses carried out by Immigration and Customs Enforcement.”

How People Feel About Ice

Immigration is hot a hot topic heading into the midterms, one used by House Democrats as a wedge issue. House Majority Whip Steve Scalise (R-LA) said the abolishing ICE is a serious issue and “everyone ought to be on record about where they stand” on it.

A Politico/Morning Consult poll from two days ago shows that the majority of voters oppose abolishing ICE:

But a plurality of Democratic voters do support abolishing ICE, the poll shows. Among Democrats, 43 percent say the government should get rid of ICE, while only 34 percent say it should keep ICE. Majorities of Republicans (79 percent) and independents (54 percent) want the government to keep ICE.

Democrats in moderate areas may have a hard time reaching over party lines if they vote to eliminate ICE.

How Do Majority of Democrats in Congress Feel?

Not only that, but it seems unlikely that House Democrats would find many among them to support the bill. According to CNN, only four other Democrats have joined these three lawmakers in voicing their opposition to ICE.

This goes for Senate Democrats as well. From The Hill:

“No, I don’t think we should,” Sen. Bill Nelson (Fla.), a vulnerable Democrat seeking reelection, said on Monday when asked if he agreed with calls to abolish ICE.

And it’s not just Senate incumbents who are unwilling to commit to scrapping the agency.

When asked about the issue on Monday, a spokeswoman for her campaign pointed to a recent CNN interview, where Rosen said ICE “does a lot of other things people don’t realize,” and Congress should instead “ask the president to stop his reckless and harmful policies right now.”

Rep. Kyrsten Sinema (D-AZ), who is running for Sen. Jeff Flake’s seat, didn’t respond to The Hill when it asked her about ICE. She did tell an Arizona television station “that getting rid of ICE ‘isn’t realistic and doesn’t make sense.'” Sen. Doug Jones (D-AL) isn’t in favor of eliminating ICE.

Meanwhile, Jeh Johnson, who served as secretary of Homeland Security under former President Obama, is warning Democrats that pivoting to abolish ICE could provide political fodder to Republicans who are eager to paint them as weak on border security.

“The reality is that abolishing ICE is not a serious policy proposal; it’s about as serious as the claim that Mexico’s ‘gonna pay for the wall,’ ” Johnson wrote July 6 in a Washington Post op-ed, adding that such rhetoric gives Trump “a useful weapon for bludgeoning Democrats politically” and “a good portion of the American public will listen to him.

This could prove interesting…

It’s from the “Be careful what you wish for” department.

I’m suspicious. Hoisting the D’rats on their own petard certainly looks like a good move by Ryan … so I must be overlooking something.

Ryan is, was, and will be, an immigration leftist. His record is consistent. A show vote changes nothing.

Yeah, until he doesn’t.

Like McConnell, Ryan shows up for work every once in a while.

I suggest all of you try to focus on policies rather than this stunt. Ryan is not gaining courage. He is using the House for a cheap stunt, just like when he defied his party and pushed his amnesty bill last month. Ryan will always be an opponent of border security. That’s why each spending bill he produces has $0 for the wall. His last one made it illegal to extend the wall. Ryan is the best ally the democrats have on immigration.

Ryan has been taking to Trump.

I think that is wrong, Ryan hates Trump, vowed to never support him. Focus on Ryan’s policies, all of which are anti-Trump.

The Democrats get their way so they must be happy, right? Nope! They’re throwing a hissy fit and the three lawmakers now say they will vote NO on their own bill.

I’ve lost count: Which sequel to “The Left in 2018 — Unhinged” are we gathering material for at present?

It’s a long term attempt at mexican and central American election meddling. Most illegals who cross our southern borders are escaping corrupt/ineffective governments. They are welcomed here by corrupt democrats, and told the way they must vote (illegally) or vote once they are “granted” voting “rights.” In return for their vote, democrats promise free benefits. Over time, they will dismantle our Constitutional Republic. Our government will resemble what the illegals escaped from, and our country will decay into third world status. Patriots should be just as adamant about preventing illegal immigration as the democrats are about Russina meddling. No Russina meddling, no mexican meddling, no central American meddling. Since our own government will not root out politicians and government officials who violate their oath to the Constitution, we must have a massive Patriot voter turnout to defeat the left.

Ryan rarely impressed me with his stances or comments or actions, yet this … well, it’s brilliant.

Put it out there that the Democrats who are firing up their base about dismantling ICE, having a immature and silly young lady declare herself a Democratic Socialist calling for ICE to be dismantled and the media heaping all kinds of praise on her victory in a primary that was barely attended, and make them vote on this “grass (astroturf) roots” call for ICE to be gone. If they vote for it, the independents will leave them, if they vote against it their base goes more nuts than usual. It is a perfect foil against the Democrats who manufactured outrage about the children being ripped from their non-related “parents” arms.

The Dems want to use condemnation of ICE doing it’s job to fire up their base, and distinguish themselves from Republicans, while having zero intentions of ICE being abolished, despite crazy eyes O-C promising to do away with ICE. Now they would have to say, sorry, we were kidding, it was theater, not real.

This almost seems like a Democrat type move, trap the opposition into showing that their talk is just talk.

I love it. If Ryan follows through. I hope he does, finally, show backbone.

Remember: ryan got beaten in a debate by joe biden.

Thats hard to do.

It’s a cheap trick to waste the House on this. Wait for September when the leftist Ryan produces another one of his leftist spending bills with no wall in it. He passed the last one with democrat votes. Do not allow Ryan to fool you with something so obvious.

HAVE YOU NO DECENCY SIR

So we looking at a 530 something to 2 vote, I presume? There’s always at least two idiots.

Dems give a new meaning to the definition of insanity

It’s not ‘insanity.’ (Unless, that is, attempting to replace our Republic with a fascist dictatorship is insanity. Then again, when you have zero going for your or don’t want to do the hard work to make a living, you joint a fascist movement hoping for a tenured position from the handlers you shilled for.)

This is going to leave a mark

U. S. Congress: the most highly paid, feckless kabuki troupe on the planet.

Disgraceful. I don’t know how these clowns can have any pride in doing their jobs. All about the $$$.

You forgot ‘corrupt.’ And man, is it out of control.

Speaking of bluffs, can an indicted foreign national hire a lawyer in the US to appear for him at arraignment, plead him not guilty and request discovery?
Just wondering, since we are discussing government bluffs.

I’d love to see one of the accused generals come here, under diplomatic immunity, as a military attache to the Russian embassy. And THEN demand discovery.

Was it just two or three weeks ago (the memory blurs under a constant inundation of feedlot dust from the Dims) that “feckless” was the word de jour. Well these three feckless Dim punks introduced legislation to ban ICE. So Paul Ryno took them at their word. Eeek–a mouse!

Elect me to Congress, and next Omnibus (that nobody reads anyway) I will slip in a provision declaring the Cloak Room and all Congressional Offices to be Sanctuary Zones required to feed, wash and clothe any and all undocumented immigrants or naturalized citizens on demand.

This would extend to any liquor cabinets over the weekend.

You’ve got my vote.

Even a broken clock is right twice a day…