You take the facts and you put them in the computer. This is not hard. 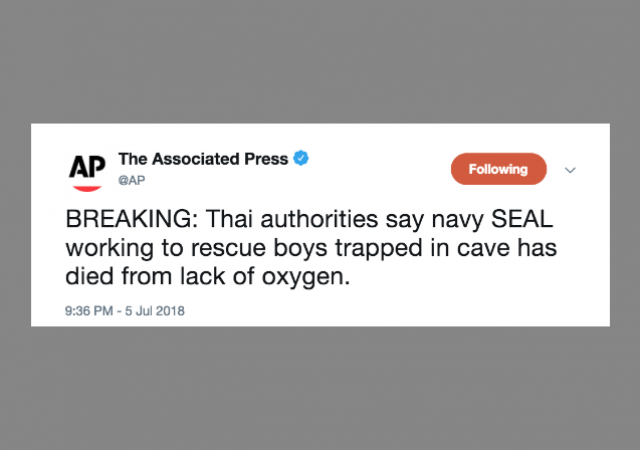 From the Department of YOU HAD ONE JOB:

Currently, 12 Thai boys (a soccer team), are trapped in a cave where they’ve been since June 23rd.

Rescue teams are frantically working to pump water out of the flooded cave in order to get the boys and their coach to safety. Heavy rains are expected Saturday and would it even more difficult if not impossible to get the team and their coach out.

In preparation for their extraction, a former THAI navy SEAL died while placing oxygen tanks. He passed out underwater and attempts to resuscitate him were unsuccessful.

By all accounts, he was an incredible man and athlete. He died trying to save others. In my book, the man is a hero.

Buuuuut, that’s not what the newswire led with on social media.

THAI navy SEAL. An important detail that had social media followers asking for clarification and rightly so. The US military is also on location and involved in the rescue efforts.

Because the AP is a wire service, other outlets ran with the same vague headline:

The AP’s article covering the story made the distinction, thankfully.

Journalism. It’s really not that hard. You take the facts and you put them into the computer.

But then the AP did fact check Sen. Pat Roberts’ porcupine sex analogy, so, yeah…

I realize that I’m not hampered by knowledge in the matter, but could oil drillers, those expert in drilling horizontal wells, be of help? Either to provide a way out or, at least, to provide additional oxygen?

That’s a good idea; I recall that in a famous south American mine collapse, drilling equipment was used to save a large number of miners who had been trapped deep underground. On the other hand, if this is underneath the Thai jungle, it may be impossible to move heavy equipment into the area.

From what I read the area above the cave is all remote jungle. No roads to get heavy drilling equipment in and too much jungle to helo the needed equipment in. Whatever the outcome, horrible situations like this bring out the best in humanity. It’s amazing to see the photos of the rescue workers and the logistics involved in getting the equipment and people to the site. Literally thousands of people from various countries. I pray they make it out soon without having to wait until November when the monsoon season is over.

@ AmandaFritz: apparently there are no roads above the area the team is believed to be trapped in for heavy drilling machinery to be moved into location, and they really have no idea exactly where the team is underground because the caves have never been mapped precisely with regards to the terrain above. Quoting one Thai official, it would be the needle in a haystack trope times a hundred.

I just heard some reporting on this yesterday, but I caught it mid-broadcast. A lot of speculation going on, and some talk of the difficulties they face with getting these people out.

This is not an easy rescue, I hope that no more lives are lost from this, and that these young people are able to be brought out safely.

Reporters (journalists as they now want to be called) are not truly reporting as much as wanting to shape almost every story they tell. They are a bit lazy with language, and frequently leave out some important information. Too often they look to report something first, rather than getting the story correct. Once the wrong story is out it is hard to correct the wrong impressions on such reports.

This seems a little thing to those in the news business, but it shows the problem they have with their credibility, their zealotry in getting stories out quickly are hurting their reputations yet they keep doing it. They don’t care about getting things right, they want the “scoop”, and it is industry wide.

This is what the msm wanted to say: U.S. Navy Seal dead because of Trump’s incompetence. Trump should accept blame and resign.

It was an accident. While relocating Iran’s rain to cause a drought, the rain fell on the Thai cave location, flooding the cave. Trump should fire the General involved, and Mattis.

Just curious. I wonder if Mattis gets bullied while dining in DC restaurants. Probably NOT

Clearly Israel is at fault for relocating Iran’s rain. Is there nothing the elders of Zion will stop at?

Well, see. There ya go. It was the MOSSAD this time, not Pres. Trump. More fake news!

Before reading about this last night I had no idea that Thailand has Navy Seals. I didn’t any other country did.

I didn’t know any other countries had seals either. The first couple of times I heard them talking about Seals helping with the rescue effort they didn’t mention that they were Thai either. I happened to catch a news broadcast yesterday where they mentioned they were Thai Navy seals.

If you hear about a foreign navy sending someone to BUD/S it is possibly believable. No other US force sends candidates to BUD/S. But foreign forces do. Not in the capacity to maintain a SEAL force.

Make of that what you will.

Just out of curiosity, what was the team doing out in the jungle anyway?

Mr. Bender, the kids were marooned in an underground cavern, after heavy rains filled the exit tunnel. The Thai military was called in to effect an underwater rescue.

Apparently they were on a “field trip” to the caves. Have done it before and they were somewhat(?) familiar with the area and caves. This time, while they were in the cave, it started to flood and they had to move deeper in (to higher ground) to avoid drowning.

According to radio, Musk is offering advanced equipment,including batteries, and personnel to help get them out.

Couldn’t he have donated an electric self-driving car to carry them out? After all if he can get a car into space, then a self-driving car evacuating the trapped should be easy and no risk to a driver. /sarc (Yes I am aware of the details of the trapped.)