The moderate bill provides protection for Dreamers and funding for a wall. 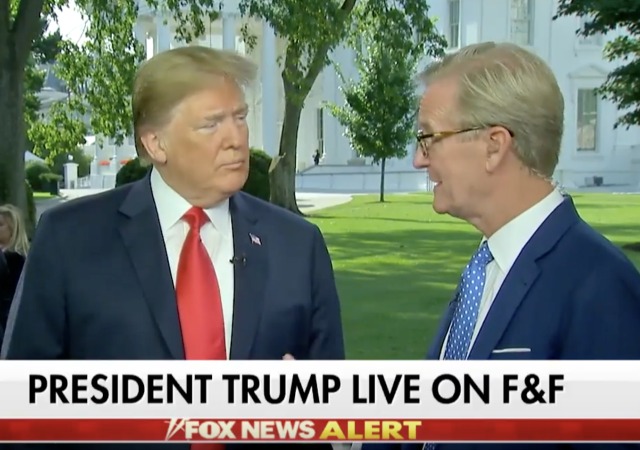 So this morning President Donald Trump gave an impromptu interview on Fox & Friends. He said he wouldn’t sign the moderate immigration bill that will go to the House floor next week. Now a White House official said the president misunderstood the question. From The Hill:

“Yes, we fully support both the Goodlatte bill and the Leadership bill. The President misunderstood the question this morning on Fox News,” the source said in an email. “He was commenting on the discharge petition/dreamers bill — not the new package. He would 100 percent sign either Goodlatte or the other bill.”

Centrists had tried to use a discharge petition to force leadership to move on four different immigration proposals, including one backed by Democrats that protects so-called Dreamers, beneficiaries of the Deferred Action for Childhood Arrivals (DACA) program.

Speaker Paul Ryan (R-Wis.) and the rest of House leadership managed to block that attempt earlier this week, and will instead bring forth a pair of immigration bills, including a more hard-line measure from Judiciary Committee Chairman Bob Goodlatte (R-Va.).

*ORIGINAL REPORT FROM THIS MORNING:

President Donald Trump delivered a blow to the House GOP during his surprise appearance on Fox & Friends this morning when he said he wouldn’t sign the “moderate” immigration plan. From CNN:

“I’m looking at both of them. I certainly wouldn’t sign the more moderate one,” Trump said. “I need a bill that gives this country tremendous border security. I have to have that. We have to get rid of catch-and-release.”

“We catch a criminal, a real criminal, a rough, tough, criminal. We take his name and then we release him. And we say please to show up to court in a couple of months. You know what the chances of getting him to court are? Like zero. OK? It’s crazy,” the President said.

The House GOP reached a deal earlier this week to vote on two immigration bills next week, which delayed a “discharge petition effort by moderates to force immigration floor votes on a broader range of proposals.”

Immigration has divided the GOP in the House and Speaker Paul Ryan (R-WI) needs the moderates to pass a bill.

The moderate bill “would provide legal protections for undocumented young people known as ‘Dreamers’ while also providing $23.4 billion for a wall along the border with Mexico.” USA Today continued:

On one of the most contentious issues, the draft proposal would allow an estimated 1.8 million “Dreamers” to apply for “nonimmigrant status”– essentially a conditional legal visa – if they meet certain conditions. They must, for example, have a high school diploma or GED and must be under 36 years of age as of June 15.

Those conditional visas would be taken from new restrictions on legal immigration included in the GOP bill; the measure would nix a diversity lottery program and limit family-based immigration. Once the “Dreamers” have taken the visa slots from those two programs, they will disappear – thus reducing legal immigration.

If the “Dreamers” win that nonimmigrant status, then after six years, they can apply for a green card, which will set them on the path to eventual citizenship.

This compromise bill would also stop “separation of immigrant families seeking asylum at the border” and allow “children to stay with parents in the same detention facilities.”

The Goodlatte bill, Secure America’s Future Act, has what the White House wants and some more, according to National Review:

It abolishes the extended-family chain migration categories and the visa lottery, authorizes wall funding and extra border agents, cracks down on sanctuary cities and asylum abuse, and mandates E-Verify.

It also would essentially codify DACA for its current beneficiaries, rather than open a whole new can of worms for 2 or 3 million “DACA-eligible” people, as all other proposals would do.

The House GOP basically needs everyone on board because more than likely all Democrats will oppose both bills because they want even more protection for Dreamers and do not approve funding of a wall.

It’s harder to pass a bill through the Senate since the GOP holds such a slim majority. Senate Majority Leader Mitch McConnell (R-KY) said he would consider bringing an immigration bill to the floor if the president said he would sign said bill.

Sadly, moderate Republicans are merely conservative Democrats. The liberal/anti-American Democrat outlook is not a good cloth for Republicans to wear (I’m looking at you, Sen. Gardner (CO)). Conservative values work best for ALL Americans, whereas Liberal/Democrat values only work for the favored few.

Heck, they’re not even conservative Dems, more like the so-called moderate Dems who used to be known as the fringe element of the Democrat party.

The only purpose for ‘Moderate’ Republicans is to shoot the wounded after a political fight. Apologies to Eugene McCarthy.

Straight amnesty is a non-starter for me. So is anything that doesn’t build a wall. But eventual visa followed by eventual green card caveated with certain education and productivity standards is a decent compromise. Chain migration, lotteries, catch and release and a wide-open border all have to end no matter what.

The “more moderate” bill is a sell-out. Trump is absolutely right to say he’ll refuse to sign it.

Dynamics of these negotiations can be changed by putting a priority on rounding up and deporting Schemers-Dreamers and permanently banning those deported. Hispanics are the second largest group of criminals in our prisons. We should not be allowing those with a high tendency of becoming criminals and a burden on society into America. Groups with high reproductive rates should be given lower quotas for entry.

Once again, thank goodness Donald won. Can you imagine what it would be like with Hillary and this pathetic, backstabbing Congress? And why is permitting the open invasion of your country by the great unwashed the “moderate” position?

Man, are you being kind.

Our nation is being run by a mafia.

This fight is nowhere near over, let’s talk again in 7-8 years to see where we stand. It’s NOT enough to have 1-2 cycles of good foundational leadership. There needs to be a complete shift in the minds of the electorate concerning the America First doctrines and our moral responsibility to non-citizens. If these cannot be attained then another Obama or Clinton will roll into DC to deconstruct our nation.

Moral responsibility to illegals, what a load of BS. Illegals are using and abusing Americans.

I’m afraid our current congress is seriously contemplating passing an immigration bill that blows open our borders just as Europe has done to their borders.

Trump promised that he will not pass another bill as bad as the last budget bill; if he vetoes these bills, will our congress pull another ‘Obamacare’ vote and override the Trump before the 2018 elections shore up his backing?

If the “Dreamers” win that nonimmigrant status, then after six years, they can apply for a green card, which will set them on the path to eventual citizenship.

Sounds like “immigrant” status to me. Same old Washington razzle-dazzle and smoke screen—call it something it isn’t, and trust that nobody will notice before it’s too late.

Surrendering on Amnesty and open borders will mean the end of the Republican Party. It probably also means the end of electoral politics. The only hope for non-kinetic politics will be the formation of a Deplorables Party, and even that likely will become kinetic. 2016 was the last chance. The Republicans are destroying it.