Another step to fix the VA. 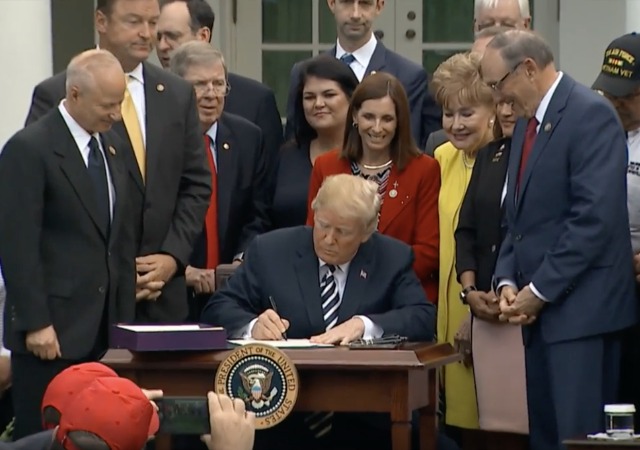 Veterans now have the ability “to see private physicians if they do not receive needed treatment from VA medical facilities, as long as it is approved by a health provider.”

Trump promised during his campaign that’d he overhaul the VA system, which for years has faced criticism for its subpar performance, especially for the horrendous wait times for a veteran to even see a doctor:

“You’ve fulfilled your duty to our nation with tremendous loyalty and courage, and with the signing of this veterans’ choice legislation, we take one more crucial step in fulfilling our duty to you,” he said.

Now that Trump signed the bill, the VA will “combine a number of existing private-care programs.” The bill forms “a commission to recommend which VA facilities are worth repairing, where new ones should be built, and which ones should be closed and care provided in the private sector instead.”

Two veterans from Texas who traveled to Washington to be at the signing said the Choice program has been extremely helpful for them. Laura Vela, who served in the U.S. Army, and Air Force veteran Antonio Garcia said they previously had to drive nearly four hours each way to reach the nearest VA hospital in San Antonio.

“To me, it’s the perfect program,” said Garcia, who had his knee replaced last year by a health care provider about a half mile from his home in Brownsville.

“I think it’s a step forward,” said Vela, who saw a private provider at VA expense for gall bladder surgery. “It is strengthening our health care, and I think it will improve the healthcare and welfare of all of our veterans.”

The legislation includes “expanded benefits to cover the cost of care-givers to take care of injured veterans in their homes” for pre-9/11 veterans since these benefits previously only went to post-9/11 veterans. The VA can also give scholarships to medical students if they promise to work for the VA, which gives the clinics a chance to hire more doctor.

The House and Senate passed the bill with massive support from both sides.

This is a good step.

I’m here to report that “Veterans Choice” isn’t working. It’s too long a story to post here, but a year ago I applied (online) for VA benefits. Three months later, with no response from the VA, I called them and was told I had to bring my DD 214 to the nearest VA hospital – 50 miles away. I did that and got officially signed up with a nice photo ID and everything. The purpose of signing up was to get some “free” hearing aids, so I was directed to the audiology department. The nice young woman there said they couldn’t get me an appointment for three months and, that being the case, I was eligible for “Veteran’s Choice” where I could supposedly use a local audiologist. After another couple of months, I was told that the only audiologist that would accept VA patients was 40 miles away over a windy mountain road. I accepted and they said they would make an appointment. A couple months later, I actually got an appointment for a hearing test. After driving up there to the clinic, the audiologist checked my hearing and said yup, I needed hearing aids; She ordered them from the VA. After three months had gone by and not hearing from them, I called the clinic. The nice lady told me it usually takes about six months before the VA sends the hearing aids, at which time I will have to drive up there for a “fitting”. So all-in-all, it’s been about a year now. I’m just glad I don’t have a serious medical problem.

My Dad lost most of his hearing in the artillery during WWII. I drove him over 55 miles of icy country roads to the nearest VA hospital for his fittings. A word from the voice of experience: The VA isn’t exactly speedy when it comes to cleaning or repairing those hearing aids, either. And if you think the aids aren’t working properly, try a fresh battery–they might be sending you duds.

Maybe I am a bit of a cynic, but phrases like “as long as it is approved by a health provider” tend to make me a bit nervous.

i keep my VA providers scared of me: i speak fluent healthcare, and routinely go over their heads when they are being a55hats.

i also turn them in for violations of Joint Commission standards.

I understand Trump has also signed a bipartisan bill relating to researching and curing cancer in children. I don’t know the details of that bill, but Trump’s on something of a roll. This is the kind of thing I was expecting to see out of a Trump administration since way back in the primaries. I can only hope that some of it produces results. It won’t be easy, but if it was easy it’d have been done already.

More than a roll:

On cannabis would you believe that Sen “Indian” Warren and Sen Gardner (R-CO) have introduced a bill? With Trump’s approval.
http://classicalvalues.com/2018/06/federal-pot-legalization-bill-introduced/

A position he has held for almost 30 years.
http://www.ocregister.com/articles/company-744807-trump-joke.html

and yet if va does not carry a specific medication va dr are NOT allowed to prescribe it even of YOU pay for it out of pocket.
still a lot of work to do.

Just think, Obama almost managed to make us all subject to government care. Federal involvement dramatically increases the cost and lowers the quality.