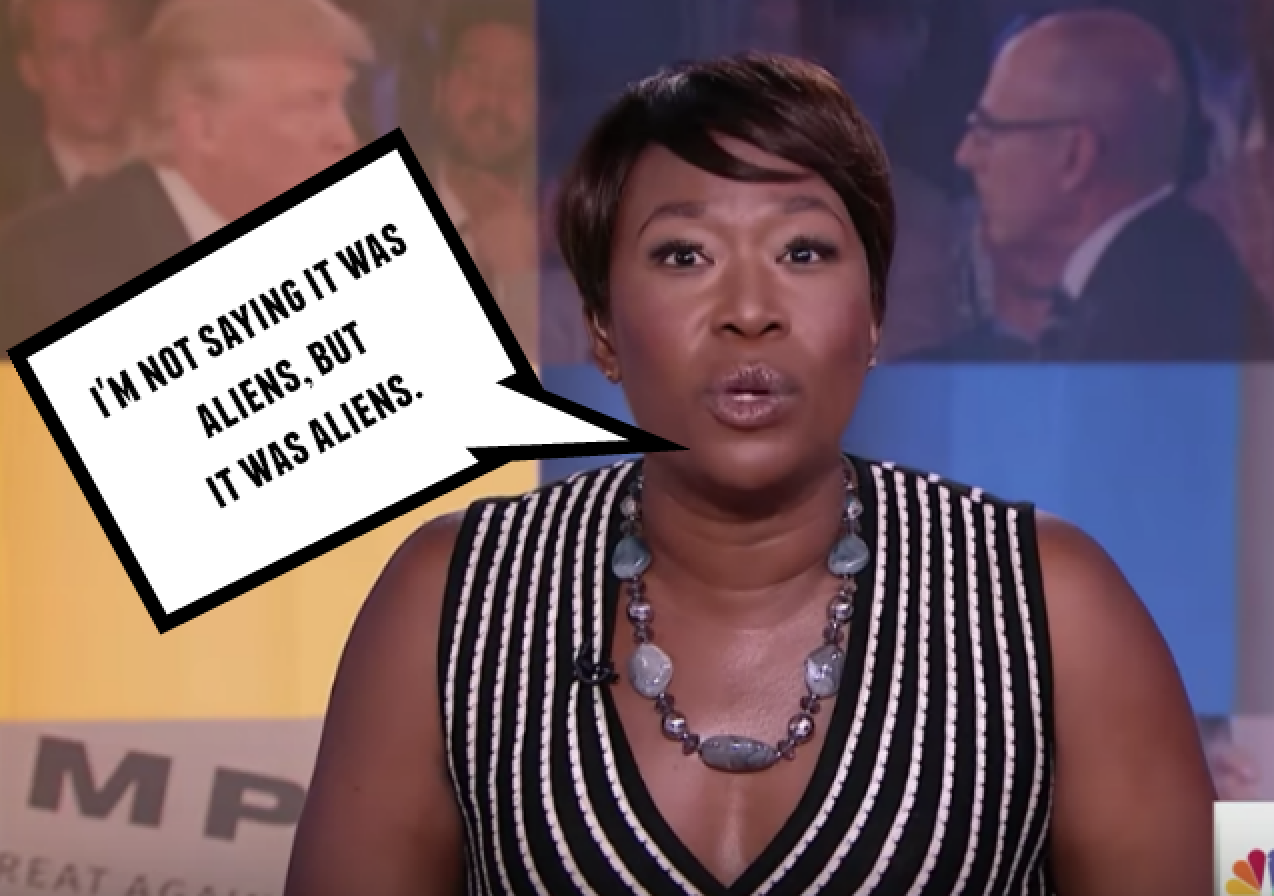 In the ongoing controversy about anti-LGBT content, MSNBC is standing by host Joy Reid and has even brought in the FBI to investigate the supposed hacking of her old site. This is likely being done as a stalling strategy. MSNBC and Reid are obviously hoping the story will fade over time.

Reid’s bigger problem is that she is facing a crisis of disbelief from her fellow travelers on the left.

The Evidence Is Not With Joy Reid

The triumph of the gay-rights movement has been so complete and fast that it’s easy to forget that 10 years ago—in the same election that swept Barack Obama to the White House—California voters passed a state constitutional amendment banning same-sex marriage. Attitudes changed, the moral arc bent, and now, a lot fewer people disparage gay people like this than did in 2006. A liberal talk-show host would and should be embarrassed and ashamed by these posts popping up, but Reid apologized once, and could have done so again.

Instead, Reid released a statement to Mediaite saying that she’d been hacked and was not responsible for the posts. “In December I learned that an unknown, external party accessed and manipulated material from my now-defunct blog, The Reid Report, to include offensive and hateful references that are fabricated and run counter to my personal beliefs and ideology,” Reid said.

The posts had been dug up on the Internet Archive’s Wayback Machine, which maintains copies of many pages on the web. When Reid said she’d been hacked, many jumped to the conclusion that it was the Wayback Machine that had been hacked. On its blog, the Internet Archive said that Reid’s lawyers had contacted them about a possible hack, but that they had no indication that one had occurred.

MSNBC host Joy Reid claims that recently unearthed homophobic articles attributed to her are fakes. And she says a cybersecurity consultant has proof that her old blog has been hacked.

But that consultant, Jonathan Nichols, had trouble producing the promised evidence. And what he did produce failed to withstand scrutiny, according to a Daily Beast analysis. Blog posts that Nichols claimed do not appear on the Internet Archive are, in fact, there. The indicators of hacked posts don’t bear out…

“We have both evidence of fraudulent posts and evidence of screenshot manipulation,” Nichols told The Daily Beast on Wednesday.

Except, that wasn’t quite so.

To support the screenshot forgery allegation, Nichols pointed to six images in the @Jamie_Maz Twitter timeline that he said were definitely not written by Reid nor posted by a hacker, but instead were outright fabricated images of posts that never appeared on the site. “The most obvious one was an instance where—it’s an easy one, it’ll stick in your head— [@Jamie_Maz] says Joy made statements about Eddie Murphy. It’s obviously false, she never made that claim.”

Nichols said those six posts are nowhere to be found in the Internet Archive. But that is not true.

Even the Huffington Post, the cherished publication of the American left is having doubts. Hayley Miller writes:

Joy Reid claims a recent batch of screenshots appearing to show homophobic statements on her now-defunct blog are “fraudulent” and the result of a cyberattack.

However, several aspects of the cyberattack claim seem highly questionable.

The host of MSNBC’s “AM Joy” came under fire this week after a Twitter user shared screenshots of anti-LGBTQ content Reid had seemingly written between 2005 and 2009 for her old blog, The Reid Report.

Reid apologized in December for writing homophobic posts about former Florida Gov. Charlie Crist (D) between 2007 and 2009 after Twitter user @Jamie_Maz shared screenshots of the posts…

The Library of Congress, which uses a local installation of the Wayback Machine, contains the disputed posts, CNN reported Tuesday. Archive.today, another archiving site, also contained the posts, HuffPost discovered.

You know who else doesn’t believe Joy Reid’s hacking claims? Joy Reid. She admits there’s not proof, but says she doesn’t think she wrote the words.

"I genuinely do not believe I wrote those hateful things … But I can definitely understand, based on things I have tweeted and have written in the past, why some people don't believe me." pic.twitter.com/PWjdPfs5KB

I must confess that it is difficult to be a progressive these days. It is hard to keep up with the current set of “truths” one is supposed to adhere to. I’ll stick with God’s truths and observable reality. They do not change day to day, month to month or year to year.

We’ve ALWAYS been at war with EastAsia.

Winston how many fingers am I holding up …

Seems she never thought she would be called to account for words, now that the left has shifted yet further in debauchery. But we have been assured there is no slippery slope in morality that we need concern ourselves with… as we continue the slide down the morass of the slippery slope.

Oldgoat36 And when we tried to avoid the slippery slope at the beginning in the public schools, they demonized us, calling us “book banners” and saying our kids need “exposure” to the real world. Look where its gotten us…

When they eat their own, do they deep-fry or bake? Gravy or catsup?

So, she’s transphobic. So are transgenders. Notably, transgender/homosexuals are phobic of many in the spectrum, including neo-sexuals.

In the end nothing is going to happen to her. Fingers will be wagged and then hugs given when she ‘apologizes’. People ‘grow’ and learn the correct behavior. That’s how the libs deal with Obama’s previous statements about not supporting gay marriage.

Is this a double standard compared to what would happen to a conservative? Yep and the libs would probably even say so.

Maybe Kevin Williamson’s comments years ago about women getting abortions was a hack???
.
Oh, that’s right. He’s a stand up guy and never denied that the Twitter statements existed. He only tried to put them into context without hiring a “cybersecurity expert”.
.
When he did the right thing, he was fired. JReid is part of the protected class though. She’ll probably get a promotion for being woke.

Liars matter, Black Liars Matter (BLM) just as much as any other.
Wouldn’t she have been more credible if she blamed this on what she was taught in church and begged forgiveness?
Flint, Mi, a community where I was raised, has two black council members who are drunks. When they have been caught they come up with similar lies. When they ran their water system into the ground, lots of lies about how their water problems were due to racism, then the state runs in and give the city many hundreds of millions of state taxpayer money.
This in spite of the fact that they are not even competently crafted lies.

Throw her in jail.

Um, what? Where’s the crime?

Creating a hoax and then involving FBI, dumbass.

Just like Shaun King’s deceptions are overlooked, so will Reid’s. She a warrior for the cause and that takes precedence. In the name of virtue, look the other way, then require virtue from others, even those long gone from different historical times.

What is worse is to have one’s hypocrisy and dishonesty trigger deep inspection of one’s dealings, which in turn leads to arrest, conviction and incarceration.

Who would have guessed that in one week every Republican senator voted for an openly gay man to be ambassador to Germany and the darling of the American left would be accused of lying about and covering up her homophobic views. None of this fits the narrative that the left wants us to believe.

I think she will be discarded. Her sin was one of the few that is unforgivable by the minions on the left. Her usefulness has expired.

MSNBC will ease her out once the initial hoo-hah passes.

Today’s new rules of engagement: If a conservative does it, then utterly destroy them. If a liberal/Leftist does it, then justify it.

Since she’s become “enlightened” to our way of thinking she can be forgiven. If that doesn’t work she can play the race card.