“I intend to think about a range of options, and that could include public service.” 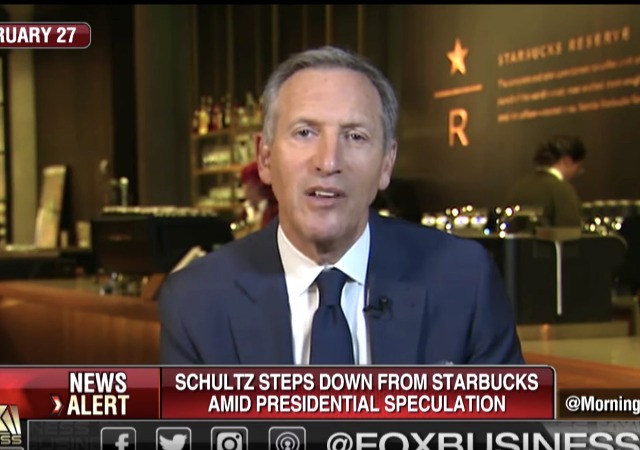 Starbucks has been plastered across headlines recently after the company closed all its stores last week for a social justice-oriented ‘diversity’ training. Now Starbucks Executive Chairman Howard Shultz, the man responsible for the well-known coffeehouse, has stepped down from his post.

Word is that Shultz has decided to prepare a run for political office, possibly the presidency.

“I want to be truthful with you without creating more speculative headlines,” he told The New York Times. “For some time now, I have been deeply concerned about our country — the growing division at home and our standing in the world.”

“One of the things I want to do in my next chapter is to figure out if there is a role I can play in giving back,” he continued. “I’m not exactly sure what that means yet.”

Asked directly if he was considering running for president, he said: “I intend to think about a range of options, and that could include public service. But I’m a long way from making any decisions about the future.”

He announced last year that he would step down from his post, but delayed the move after police arrested two black men at a Philadelphia store for loitering. This incident prompted the chain to close and put staff through “color brave” training. Starbucks changed its policy and now allows people to stay in the stores even if they don’t purchase anything.

Schultz built Starbucks from the bottom up. He also didn’t have a problem wading into social issues. After Trump announced a “travel ban,” Starbucks announced they’d hire refugees. The company also made it a priority to hire veterans. Schultz even “raised waged”, paying employees well above minimum wage. Other incentives include expanded health benefits and college tuition assistance.

Schultz’s name has popped up as a possible 2020 Democratic presidential candidate to challenge President Donald Trump. There are quite a few articles from the last year in the The Washington Post propping up Schultz, like this one from September 2017. The article said “Schultz sure sounds like a 2020 presidential candidate.” Aaron Blake wrote:

Schultz spoke with The Washington Post at a job fair for young people on Wednesday, and while he insisted he wasn’t talking politics, it wasn’t difficult imagine him delivering the same words in a stump speech in Des Moines.

“The worst thing that we all, whether we be businesspeople or private citizens — we should not be embracing indifference right now,” Schultz said at the 100,000 Opportunities Initiative. “We have to be engaged, we’ve got to speak out, we’ve got to be involved, we gotta stand up for the things that we know are true. And I think the country, in many ways, is in need of a moral, a cultural and an economic transformation.”

Schultz drew attention in March for attacking President Trump, calling him “a president that is creating episodic chaos every day.” He said that Trump’s behavior was “no doubt affecting consumer behavior.”

Schultz can continue to brush aside the speculation, but he does sound like someone who may run. He appeared on CNBC’s Squawk Box on Tuesday morning:

“There’s a lot of things I can do as a private citizen other than run for the presidency of the United States,” Schultz said on CNBC’s “Squawk Box” Tuesday. “Let’s just see what happens.”

“I don’t know what that means right now,” he said. “But my concern for the country and the standing in the world, the lack of dignity, lack of respect coming from the administration. I think we can do much better.”

The extensive interview, which followed Schultz’s decision to step down as executive chairman of Starbucks later this month, touched on a number of issues from the need to improve education and trim the ballooning national debt to Schultz’s view on the markets and trade policy.

Best thing about the Howard Schultz presidency? EVERYONE gets to use the White House bathrooms.

“Public service” is another of those corruptions of language.

It is sickening to see them come to DC “to do good,” and watch them do very, very well for themselves. The Clintons are certainly an outstanding example of this; they head a very long list.

hrhdhd….I can see you need a proper definition:

Public Service: A process where the politician pisses on your leg while telling you….”We need the rain”….

The entertainment value will be amazing… seeing Commie Bernie and the Fake Indian have to run against an actual billionaire… priceless.

“… my concern for the country and the standing in the world, the lack of dignity, lack of respect coming from the administration. I think we can do much better.”

Howard,
Are you partial to that name?
Regardless, I can feel your pain from here and have decided to give you an advance copy of my new book:

CAMPAIGNS FOR DUMMIES
dedicated to Mom

Chapter One
Gather up all the sycophants in your midst.

Because your opponents first ad will be an overflowing nasty Starbucks bathroom littered with used syringes bobbing up and down around a dead homeless guy. Caption: Leadership?

Howard Shultz for President 2020
Get your tetanus shot today!

Shultz wants to be Barista-in-Chief.

Smells like had to leave Starbucks in disgrace and is trying to cover that with some face-saving excuse. For both his ego and his network of friends.

I predict his desire to run for office will last until he’s required to commit a significant amount of time money and energy into it.

Then he’ll gracefully bow out to Save The Whales or something.

Does he intend to open the White House bathrooms to the homeless?

Don’t write this guy off. Anyone who can get people to pay $5-$6 a cu8p for the bitter swill Starbucks sells, isn’t an idiot.

Now that Schultz has utterly wrecked the future of Starbucks he’s leaving so he can do the classic Democrat move of whining that his successor is wrecking the company he left with a future of sugar and rainbows.

And watch out, Schultz, Bob Iger of the Soy Wars fame may very well give you some ‘competition’ in politics!

” my concern for the country and the standing in the world, the lack of dignity, lack of respect coming from the administration. I think we can do much better.”

Oh. So you’ll be running as a Republican.

Or a gig writing over at National Review.

I think that’s swell. I mean, who needs jobs and economic growth when they’ll respect us in the morning in China. Or Mozambique.

When I first read this I laughed. Yet, he would get leftist support. Not sure if it is enough given the crazy views they are having lately.

My first question to him would be who he really wants to be President for, the illegals, the people in other countries, the criminal element who are destroying society, or for regular Americans who are gaining jobs, gaining self respect through having employment and a sense of value?

Why does he think our standing in the world is bad? Is it because we have a President who is willing to say we have issues with the way trade has worked, it has hurt the US in an unbalanced way and it needs to be evened up? Is it because he isn’t a push over for tin pot dictators like the Little Rocketman, as his predecessors were? Is it because he stood against the Iran horrendous deal that other countries liked because they were making tons of money off it, while letting Iran work on their Nuclear program in quiet?

While the President is a global figure, his first concern is supposed to be for the citizens of the US, and most of all, for the people who pay the taxes.

This moron has taken a company that was raking it in, and turned it into some social experiment that is on the down turn. Why should anyone consider him a leader of worth? Other than his overly high costs for coffee that really isn’t good, what has he done?

Well, whatever he does … we can be pretty sure it’ll be overpriced.

He is upset that Mr Trump is generating jobs for those unwilling to pay Fourbucks for coffee. No what would be interesting for He and bloomberg to get into it, since your average Fourbucks drink these days is really a 600 calorie faux milkshake, unless adding half and half to ice and sugar makes something else. I believe that Fourbucks is currently #2 in the fast food biz, and that their products are probably on the same nutrition level as those from MickyD’s. Your pancreas and liver don’t care if those empty calories are free trade or not.

Before I get grief, I get a senior coffee at my local Fauxbucks (grocery store kiosk) for $1.09 (personal cup) and a free refill, so if anything, I’m increasing their bottom line.

He’s turned Starbucks into a running joke with all the PC crap he’s implemented over the past couple of years. Only idiots pay over a buck fifty for a cup of coffee with a little flavoring in it. I’m proud to say I’ve never set foot in Starbucks and never will. I won’t be pulling any levers for Howard in any election, whether for dog catcher or President.

Oh please let him run as a Republican so u can vote against him. After showing up for one of his rallies as the only one there.