“Benedict was courageous, brave and selfless. If he hadn’t stepped in, the cyclist could have been seriously injured” 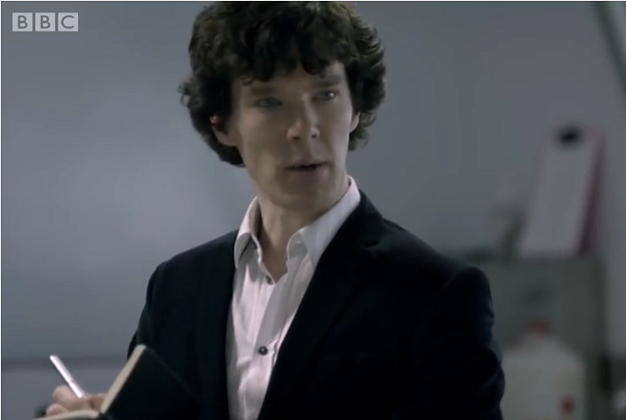 I’m a fan of most things Sherlock Holmes, including as he was portrayed by Benedict Cumberbatch in the BBC’s Sherlock.  This story caught my eye because of him, and at first I wasn’t sure it was real, but it appears that the actor really did leap out of a car and rush to the aid of a delivery cyclist who was being assaulted by four attackers.  The incident happened in London.

Benedict Cumberbatch is reported to have saved a cyclist who was being attacked.

The actor, who plays Sherlock Holmes in the hit BBC series, is said to have rescued a Deliveroo rider who was being beaten up by a group of four people, it emerged on Friday night.

The Sun said Cumberbatch was in a cab on Marylebone High Street in central London with his wife, Sophie Hunter, when they saw the cyclist being hit over the head with a bottle.

The driver of the car, Manuel Dias, told the newspaper: “Benedict was courageous, brave and selfless. If he hadn’t stepped in, the cyclist could have been seriously injured. Here was Sherlock Holmes fighting off four attackers just round the corner from Baker Street.

“He stood there instructing them in the street, shouting, ‘Leave him alone.’ I had hold of one lad and Benedict another. He seemed to know exactly what he was doing. He was very brave. He did most of it, to be honest.”

Sky News is reporting that the delivery service has thanked Cumberbatch for his actions in protecting their rider.

“Deliveroo riders are heroes delivering millions of meals to hungry customers right across the country,” said a company spokesman.

“Their safety is our priority and any violence against riders is totally unacceptable. We’d like to thank Benedict Cumberbatch for his heroic actions. On behalf of everyone at Deliveroo: thank you so much.”

Here’s a clip from the first ep of Cumberbatch in the BBC’s Sherlock:

After Jeremy Brett, there isn’t another actor who could do an excellent job of portraying Sherlock, just as after David Suchet there isn’t another actor who could similarly portray Poirot. Both men epitomize the part and all others fall short (though Basil Rathbone did a fair job in the ’40s Sherlock movies and I think Nigel Bruce was most likely the best Watson portrayal, but I could be influenced by his being the Watson of my Saturday double feature matinee movie youth.

Dr Strange to the rescue!

All evil needs in order to thrive is for the good to do nothing.

Good story. Another example of someone doing something for another without thinking of their selves first.