Want to fix the homeless problem? Look at your regulations, Seattle. 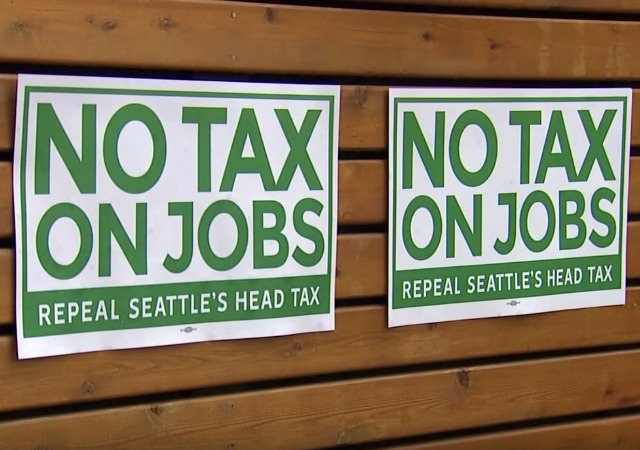 Less than a month after they passed it, Seattle’s city council voted to repeal the corporate head tax after facing legitimate pressure from companies like Starbucks and Amazon.

The city council planned to use that extra tax money to counter the city’s growing homeless problem.

The council originally wanted to tax the businesses $500 for each employee. Amazon blasted the idea and threatened to stop expanding in Seattle.

Why is there a housing shortage in Seattle? Politicians and regulations of course! Seattle has a 685-page residential building code and a building code that’s 745 pages:

If you want to build apartments, you better hire lawyers and “fixers” to keep you on the right side of the rules.

Seattle’s rules insist that “Welded splices shall be of ASTM A706 steel” and “foam plastic signs shall not be greater than 1/2 inch” thick.

On the majority of Seattle’s land, building any high-rise is illegal; zoning rules say only single-family houses may be built.

Want to run a cheap flophouse with single rooms? Seattle’s rules make that just about impossible.

A landlord “must pay each of his tenants $3,000 in relocation costs” if he wants “to take a building off the market.”

Jeff Pelletier at Board and Vellum Architects explained that the permits they need are “one of the main drivers in the rise of housing in Seattle.” Yes, it’s great to be thorough on projects, but the builders “are seeing tremendous cost and schedule increases from local building departments.”

Seattle should scrap the rule that only allows single-family homes. On a plot that would hold three or four of those homes, “the city could allow developers to build projects that house more than 100 people, getting much more bang for the buck in land use.”

Another complication? The $15-an-hour minimum wage:

This year the full $15 per hour minimum wage went into effect, but the impact was felt much earlier. A University of Washington team completed a study of worker pay, hours and benefits in Seattle last and found the law was a net loss for workers.

The study concluded: “Our preferred estimates suggest that the Seattle Minimum Wage Ordinance caused hours worked by low-skilled workers (i.e., those earning under $19 per hour) to fall by 9.4% during the three quarters when the minimum wage was $13 per hour, resulting in a loss of 3.5 million hours worked per calendar quarter. Alternative estimates show the number of low-wage jobs declined by 6.8%, which represents a loss of more than 5,000 jobs.”

Keep in mind this was before the full impact of the $15 per hour minimum wage could be felt, as the law only became fully implemented this year. The situation is going to get worse in Seattle.

The Trouble With Unnecessary Corporate Taxes

When the tax bill passed earlier this year, large companies gave employees raises and data showed that many corporations used tax cuts to increase capital spending by 39%, the fastest rate in seven years.

The head tax deprived companies of needed profit. It also halted construction on a new building and a lease on another space. Both of those ideas “would provide space for 7,000 new Amazon workers.”

Instead, Amazon announced 2,000 new jobs in Boston and another 3,000 jobs in Vancouver.

The best way to fight the homeless problem? Jobs.

Denise Moriguchi, the CEO of the Asian supermarket Uwajimaya, told KOMO News that the big repeal effort “took off because people are fed up seeing tax dollars poured into programs with uncertain results.” She reminded everyone that situations don’t look like they’re “getting better, and so it’s tough and you just wonder how’s that money being spent.”

Jeff Shulman at the University of Washington’s Foster School of Business criticized the tax and described it as “the antithesis of the collaborative spirit the city is known for.” Shulman didn’t like how the tax “set up businesses as the enemy” since “in reality, the city is going to need them as allies and partners.”

think it had more to do with the 45,000ish signers of a citizen’s initiative to rescind the #headtax to make initiative a mute point.. because it’s language might have been interpreted to be a permanent ban on said head tax.

Here’s some background on Seattle’s crowding. They have water on two sides essentially. East of lake Washington is rapidly filling farms and towns that are turning into bedroom communities.

There is Damn little room for new housing in Seattle. In older neighborhoods they are demolishing homes to put up Two or three skinny houses in the place or destroying a commercial building to put in apartments.

Some areas have worked to keep growth down but pressure is immense from Californians. That started in the seventies and took off like a rocket in the eighties. People fleeing the Democratic Peoples Republic of Mexifornia bid housing prices through the stratosphere.

Seattle has lots homeless because they provide lots of services. In my grandfather’s day they’d put them to work at a farm south of the city proper.

Seattle does have lots of regulation but other cities in the county have more. Seattle has had hobo jungles on some of the undeveloped areas like the west side of Beacon Hill forforty years but now walking down the street downtown is an exercise in dodging human feces, needles, and sleeping winos.

There is nothing ultra-left Seattle can or will do to decrease homelessness. They are constrained by their politics and liberal white guilt.

Starbucks can repurpose their stores as homeless shelters. Oh, the virtue. The short-lived virtue. The journolists would have a field day.

Can?? They defacto become that with their recent virtue signaling changes. 😉

Were these companies conservative outlets they would be lambasted in the press for being greedy and heartless.

I wish they had left Seattle, but I guess why leave, when you can exert your significant crony control over a metropolis.

As a Seattleite who dearly loves his city, it’s a pity to see an ultra-leftist city council seek to destroy the super economy that the business community has developed. Requiring businesses to pay a head tax on their employees is sheer lunacy. That’s no way to increase employment.

Why does Stossel site the building code provision about ASTM A706 steel for welded splices as if it is an onerous requirement? Is that the reason that Seattle has a homeless problem? This is the kind of pettifogging that makes Libertarians look silly.

Libertarians need no help in making themselves look silly. They are as deeply unserious as Pat Paulson (who I met on the campaign trail in 72 or 76). Perpetual court jesters they excel at silky pronouncements and utopian predictions.

So, the way I’m reading this, is that The Big Corporations just found a way to dodge taxes with the help of the Duly Elected Officials who are owned, body and soul, by the same Big Corporations.

Hmmm. Forgot my HTML ‘sarcasm’ tag would be edited out.
Seriously, people, my comment above was sarcasm.

You can always add a smiley face doo-dad at the end your statement so people know…”Oh…he was being silly!” 🙂

There’s another word for “head tax” in the English language. Poll tax. I wonder why reporters didn’t use it. Actually I don’t. Reporters as a class are ignorant, uneducated, barely literate boors, who probably think poll taxes have something to do with voting.

I used to say that Portland was so nice that even the libtards couldn’t screw it up, but recently they have been proving me wrong. The entire season of SoDoSoPa (South of Downtown South Park) gentrification was a commentary on what is happening to the big cities that are getting Kalifornicated. Portland just announced plans for another line of the train from nowhere to nowhere at an estimated cost of $2.8B so that drunk housewives can take the train from one shopping area to another without endangering the rest of us. This type of stupidity is not limited to Seattle, they are just a bit better at it.

Oh, when they say proposal, what they mean is that they have decided to build it regardless of what anyone thinks.

Isn’t Portland the city that was trying to convince homeowners to build tiny houses in their backyards for the homeless ?

Providing services for the homeless is as productive as feeding rats. You just end of with more. The doubling of the container deposit only ended up doubling the amount of $$ available for meth, heroin, and MJ. The net result was 10 times the amount of trash dumped on the streets as additional containers redeemed. Liberals simply have no concept of unintended consequences.

My local solution was to start feeding the animals. 10 lbs of birdseed will take care of a homeless camp in no time, as the hungry little mavens like to start about 5AM, and if you toss in sunflower seeds and corn, the crows and squirrels show up to party as well. At some point rats might appear, but they go away as soon as the food dries up. win win