“All the anti-American posters . . . they’ve all just gone” 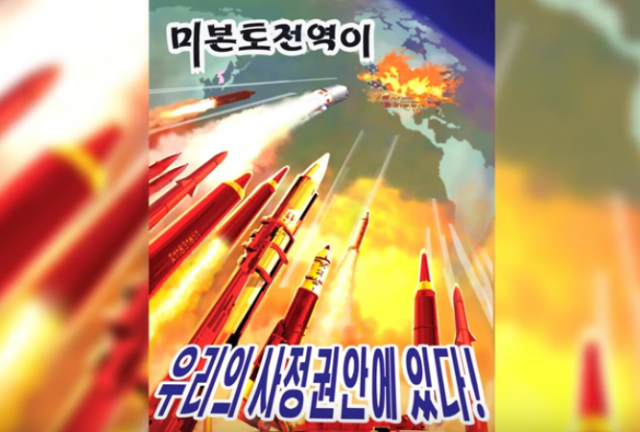 One of North Korea’s first acts after President Donald Trump and Chairman Kim Jong Un signed the Singapore peace agreement has been a change in their propaganda.

Banners and posters displayed across the capital and other towns have typically featured the US as a brutal imperialist aggressor and South Korea or Japan as Washington’s willing allies.

But visitors to the country say they’ve seen those posters replaced by propaganda pushing economic progress and the inter-Korean rapprochement.

Leading newspapers in the tightly controlled country have also seen a shift in tone, a sign the country is starting to reflect its recent diplomatic thaw to the people.

…”All the anti-American posters I usually see around Kim Il-sung Square and at shops, they’ve all just gone,” Rowan Beard, a tour manager at Young Pioneer Tours, told the Reuters news agency.

Anti-American signs were once displayed all around Kim Il-sung Square. But now, reports @AndreasIllmer, the posters are gone. https://t.co/B6gwf3U8EZ

For those of us who can’t read Korean, here are some intriguing translations.

One poster showed Mr. Kim and Mr. Moon holding up the agreement from their meeting, with a slogan that read, “The whole Korean nation should firmly consolidate under the flag of national independence and build a strong, prosperous, unified nation!”

Another poster turned part of the summit agreement into a slogan: “Let’s exert joint efforts to alleviate the acute military tension and eliminate the danger of war on the Korean Peninsula!”

Items criticizing the U.S. are no longer stocked at shops geared toward tourists on the North Korean side of the demilitarized zone (DMZ), as well as in the cities of Pyongyang and Kaesong.

Simon Cockerell, Koryo Tours General Manager, told NK News on Wednesday that his company had a group of tourists visiting North Korea last week and this week. He said the participating tourists “reported the absence of anti-American propaganda material.”

In regards to the DMZ, it is now being reported that the U.S. military has moved 100 caskets to the area between the two Koreas, as the initial phase of preparation for North Korea’s returning of the remains of U. S. soldiers who have been missing since the 1950-53 Korean War.

U.S. Forces Korea spokesman Col. Chad Carroll also said 158 metal transfer cases were sent to a U.S. air base near Seoul, South Korea’s capital, and would be used to send the remains home.

The cases will remain in the border village of Panmunjom for a few days until being sent into North Korea so the North can begin the process of returning the remains of Americans who were killed or died during the 1950s conflict, South Korea’s Yonhap News Agency reported.

100 US wooden coffins are on way to DMZ to begin remains recovery from #NorthKorea; flags enroute as well. @KoreanWarVets #KoreanWar https://t.co/5Cuef5Hifi

I will be offering intentions at Mass this weekend that there are even more signs of peace on the Korean peninsula over the coming weeks.

In five years? This is almost certainly a first for the last 15 years. So, ummmm, we must all say “thank you President Obama”, right?

To my great delight, NK newspaper articles are changing quickly also.
I often wonder what their citizens think when the writers of the copyright headings announce that the evil bloodthirsty American bastards aren’t so bad after all.

Good thing they don’t have nukes – and we have guns.

Am I nuts to wonder how much Soros would spend to sabotage the US efforts in NK? Would he spend his own money to ruin the chance for peace just for the propaganda to say that Trump failed?