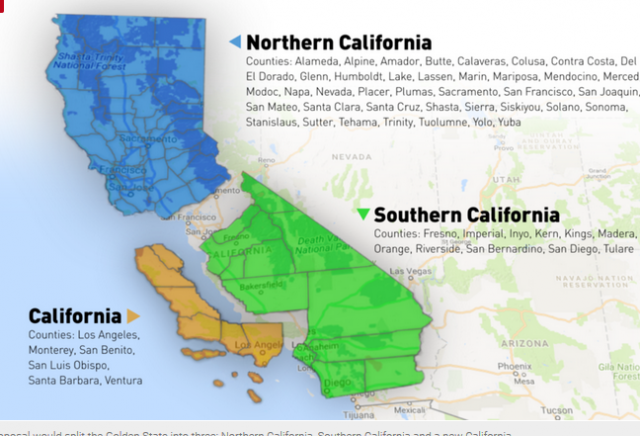 I noted earlier this year that voters across California might have the chance to decide in November on a proposal to split up the Golden State into three new ones.

For the first time since before the Civil War, voters across California will decide in November on a proposal to split up the Golden State — potentially remaking it into three new states.

Supporters of the radical plan submitted more than 600,000 signatures, and a random sample projected that enough are valid that the measure can go before voters, setting up a campaign that is sure to attract a carnivalesque atmosphere and only-in-California chuckles from across the country.

The naysayers are already lining up.

The opposition already is forming. NoCABreakup, which is lead by former Democratic Assembly Speaker Fabien Núñez, is gearing up to battle the split-state plan.

“California government can do a better job addressing the real issues facing the state, but this measure is a massive distraction that will cause political chaos and greater inequality,” tweeted Steve Maviglio, a consultant for the opposition effort. “Splitting California into three new states will triple the amount of special interests, lobbyists, politicians and bureaucracy.”

[Law professor Vikram] Amar wrote that Democrats would be “very reluctant to run the risk” of supporting the proposal in Congress. “And risk aversion looms large in these matters, which helps explain why no new states have been added to the United States in over 50 years, and no new state has been created out of an existing state for more than 150 years,” he wrote.

There also is a sizable debate about whether such a sweeping change can be created through a ballot initiative — that is, whether it rises to the level of a “revision” of the California Constitution, which can only be instigated by the Legislature or by a formal constitutional convention.

I have decided I just may vote for this measure. First, I suspect my new state won’t have water rationing. As an extra bonus, my Governor won’t be Gavin Newsom! That is about as much win as I can hope for this November.

So if California splits into three states, which one retains “statehood”, i.e. membership in the Union? (Assuming all three don’t inherit it.)

And if the region on the map labelled “California” doesn’t automatically inherit statehood, can we retain it as a territory and NOT accept it as a State? 😉

There’s very little about this proposal not to like. 🙂

Northern California would be blue because of the Bay Area. The population in the rural areas isn’t large enough to make it red.

The referendum is irrelevant. The US constitution does not recognize them. Changes to a state’s boundaries can only be made by Congress, and require the consent of that state’s legislature. Regardless of what the people want, why would the Dems in Sacramento ever agree to a proposal that would diminish their power?

It is tricky, but it can happpen as you note with the agreement of both the U. S. Congress and the state’s legislature. And, of course, you nail the problem; Dems who control Cali will not agree to a split that will effectively hobble their power.

Should Cali split up into separate states, the EC would be affected, and since the split proposed carves out the left-leaning districts, all this does is hand over EC votes to the opposition they’ve managed to mute in statewide and federal elections. It won’t happen.

Luckily, even if the people of California decide they want to be three states, the rest of us get a say in whether we will admit two new states to the Union. No way in hell I would support Cali getting so much as a single extra seat, never mind 4 new senators.

And then there are issues like who gets stuck with Cali’s debts? If we’re going to admit a new state, how about Puerto Rico instead. California has been getting the lion’s share of too many things for FAR too long.

Puerto Rico, that is nuts, the country is functionally equivalent to our inner cities, one big welfare basket case.

So “Northern California” will still be ruled by the bay area to the detriment of the entire Northern half of the State? No wonder Silicon Valley is supporting this.

I’d go for the split if just the Bay Area (and Sacto) were split off from the rest of the state. My county (other than the college student/temporary residents) and Northern Santa Barbara County have much more in common with the Central Valley than with either LA or SF. At least the proposed split would not put us with the Bay Area. I’d go for it if they just split those two areas (Bay & LA) off and left the rest of the state intact, though that would assure at least 4 Democrat Senators out of the 6 and probably still a majority of the Representatives.

I agree. We live in Sutter County and won’t vote for this unless the coast and Sacramento are quarantined into one state, otherwise it’s a pointless exercise that changes nothing for us.

Given my ‘druthers, I’d like to see them all Territories. Then let them petition Congress for admission as States. I could get used to the old 49-star flag, at least for a while.

Congress could even tell them to go away and try again when a higher proportion of citizens speak English.

Ah well, just a pleasant fantasy … something we could all use, like World Peace, a really good five-cent cigar, and an incrementally less silly United States.

Even though I’ve been living here for 25 years – the land of fruits & nuts! – I’ve never felt like calling myself a Californian! i still consider the Great Rain Forest (Seattle) my “hometown” and my feet are still webbed….. But, for some crazy reason, I LOVE the idea of chopping up this People’s Republic!

How about forcing the invaders out of California? Why is America putting up with this assault on our sovereignty?

Because the majority in Congress are in favor of uncontrolled immigration. Why do you think nothing has been done to control it in the last thirty years? It wouldn’t be particularly difficult to turn off the magnet that attracts these people, and start expelling those who are here — it’s just that the politicians don’t want to do it.

What about the “State of Jefferson” group and their Legal Claims for statehood (you will remember that the date for the referendum to create the S.O.Jefferson, was to be December 8, 1941, and we kind of had some more important business to attend to at that time.

I see a couple of problems here:

1) San Francisco and Sacramento are in what should be “Jefferson,” forcing their values on the Rural Citizens of the North (who would still be getting No Representation). It would be better to group them with the Coastal California group, with whom they are demographically aligned.

2) What about ALL of the other sections of states that don’t feel represented by their state governments? Western Maryland is demographically West Virginia. Similarly, Northern Virginia runs the rest of Virginia and D.C. has been screaming about Taxation Without Representation for years. I’m sure that Upstate New York would be happier without “the City,” Long Island and Albany (basically from Albany east of the Hudson and south) and the rest of Illinois would also probably be happier without East St. Louis and Chicago. South New Jersey voted to secede from The rest of New Jersey in the 1980s, Eastern Washington wants to separate from the Coastal/Cascades, and Texas has long declared that it has the right to split into 10 different states.

Governments are not going to be willing to let their Rural Tax bases that finance much of their budgets go away. Much like Lincoln, many/most of the leaders of states wanting to split would be willing to use force to keep the money (tax base) they already have.

The additional accounting to divide federal funds received and the debt already incurred by the current state will cause much indigestion. And what will happen if one of the new states decides to Cancel Jerry Brown’s new high speed train set?

And while I’d like to see the leftists combined into their own little enclaves, I look at who’s financing this movement, how the boundary lines are drawn and California’s need to manipulate/control the culture make this movement more than a little suspect for me.

They have no legal claim, and never had one. It’s entirely up to Congress and the CA legislature, and nobody else gets a say in the matter. All referendums on this are wastes of time, money, and energy.

(you will remember that the date for the referendum to create the S.O.Jefferson, was to be December 8, 1941,

No, I do not remember any such thing, and don’t believe you. What is your source for this claim? Who exactly was planning to hold this so-called referendum, and where?

I’d like to see California split up, but not in the way described here. The coastal state should include both Los Angeles and San Francisco, and probably Sacramento, to keep the leftist lunatics concentrated in their own area, and allow for a better grade of government in the remainder.

Bigger issue… the way California is being divided, this would create 2 blue states and 1 purple state. Nope, not voting for it.