Kilauea’s lava gets hotter and spreads faster as eruptions continue

Kilauea’s lava gets hotter and spreads faster as eruptions continue

New technology saves one man from lava, while another man drives his truck into a hardened flow. 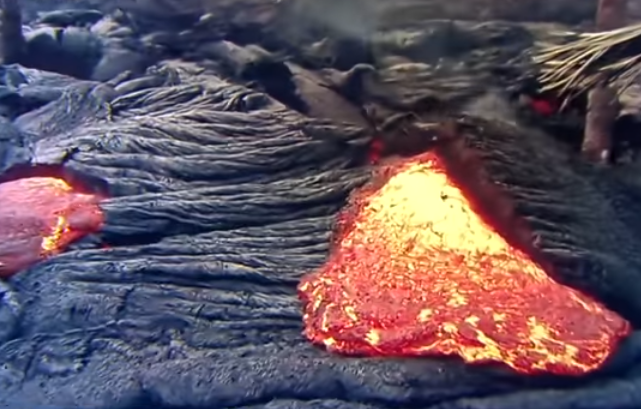 The last time we visited the erupting Hawaiian volcano, Kilauea, the lava from the steadily erupting volcano was oozing over wells at the Puna Geothermal Venture Plant.

Now, that lava has destroyed two of the plant’s buildings.

Lava has burned down two buildings at a geothermal plant near Hawaii’s erupting Kilauea volcano.

A substation and adjacent warehouse that stored a drilling rig at the Puna Geothermal Venture were covered by lava on Wednesday, according to a Thursday statement from Ormat Technologies, the Nevada company that owns the plant.

This particular eruption cycle has heated up, with the lava oozing from Kilauea getting hotter and more fluid since its initial eruption in early May.

Lava bubbling to the surface on Hawaii’s Big Island is the hottest and most fluid it’s been since Kilauea erupted four weeks ago — measuring at least 1,652 degrees Fahrenheit with no upper limit in sight, a volcanologist with the USGS warned Thursday.

Wendy Stovall with the U.S. Geological Survey told reporters that the actual temperature is likely even higher.

“It’s hard to get to the center, which is the hottest portion of the fountain,” Stovall said.

The more fluid the lava, the faster and farther it can spread. Therefore, Hawaiian officials are issuing mandatory evacuations of nearby areas, and indicate they have no plans to rescue those foolish enough to stay behind, as it is clear that the volcano is not likely to stop erupting soon.

Residents have been advised to evacuate by noon Friday. Emergency responders have no plans to rescue anyone from the evacuated areas past the deadline, the agency said.

“They are being asked to leave. Period,” county spokeswoman Janet Snyder told reporters.

Those in Kapoho — including Kapoho Beach Lots and Vacationland — also were ordered out due to the risk of getting trapped by the lava.

Fortunately for one Hawaiian, the officials were still conducting rescue operations earlier this week.

A drone and a cellphone flashlight helped first responders rescue a Hawaii man trapped in his home by a fast-moving lava flow from the erupting Kilauea volcano.

On the evening of May 27, United States Geological Survey scientists deployed a drone to survey a new outbreak of lava on Luana Street in the lava-besieged Leilani Estates subdivision, where destroyed dozens of homes have been destroyed [sic] since the Kilauea eruption began in early May.

As they were preparing to fly, the team received word that a man had become trapped nearby. The team, which had been coordinating with local emergency officials, flew the drone to the vicinity of the man’s home, and first responders instructed him to follow the drone to safety.

One man decided to tempt fate and ignore police commands not to drive through a lava-impacted area.

Police say they have arrested a 55-year-old man after he went past a traffic checkpoint and crashed his vehicle into hardened lava on Hawaii’s Big Island.

Police say in a statement that the man demanded passage through the checkpoint but was instructed by police to turn around Thursday night. The statement doesn’t say how the man got past officers. About an hour later, a resident brought him back to the checkpoint with injuries to his head and face. The man told police he had smashed his truck into lava.

Anyone who has ever watched natural disaster movies knows something like that never ends well.

I had no idea Tommy Lee Jones and his daughter lived in Hawaii. I’m guessing mom shot the video?

So it’s kind of like the zombie apocalypse, as long as you’re reasonably sober you can just walk away from danger?

Is there nothing Trump can’t do? I know Jamie Lee Curtiss thinks this is supposed to make me hate Trump. But actually it makes me admire him even more. I do wish he’d stop sending out all those fake Alaskan tsunami warnings from his golf course in Florida. I mean, a few are OK. But when overdone they lose their comedic effect.

Interesting question: What happens if the lava does *not* recede? What if it continues covering the island under hundreds of feet of cooling rock, or even blows up violently enough to endanger lives on nearby islands?

Hollywood imbeciles will have to find another vacation spot in to jet away on their private planes.

Maybe they’ll go to Cuba. And stay there.

Can’t that Hawaiian judge just put an injunction on the lava or something?

Maybe that judge should be placed on a hardened flow close the volcano so that he can personally order it to stop? That would be far better than an injunction.

I don’t remember the clip being so humorous.

“Oh yeah, I left my daughter in the car in front of the advancing lava flow. Gosh darn it!”

This one is even more ridiculous.

WARNING: If you have any familiarity with Chemistry or Physics, please ensure your head is at least 10 feet away from any desk before viewing

* Legal Insurrection is not responsible for any Traumatic Brain Injury acquired from watching this video. We don’t even know who let that Fen guy in the door.

Where is Spock and the Enterprise when you need them?

Wow, it’s hard to believe it can be a bad idea living on and near and active volcano. Pretty place, but for the crispy critters.

One man decided to tempt fate and ignore police commands

Anyone who has ever watched natural disaster movies knows something like that never ends well.

And anyone who’s ever been in a natural disaster situation—even a very minor one—knows that it can bring out latent authoritarianism in people who are supposed to be helping.

I’ve seen fire and police personnel insist that people get “back inside” when they were trying to inform them that downed electric wires were starting a fire. Nope, controlling a non-existent “crowd” (two people who know a fire when they see one) is more important than attending to a little fire before it becomes a big one.

What I want to know is if the Hawaii volcano explodes, you know, like a Mount St. Helens or Krakatoa, could it cause a tsunami, and if so, could that tsunami, for God’s sake, please destroy California?

I bet there would be surfers waiting the catch the big one…. imagine Newport Beach to Pomona non-stop!

This particular eruption cycle has heated up, with the lava oozing from Kilauea getting hotter and more fluid since its initial eruption in early May.

If that volcano were to blow its top, shooting particulates high into the stratosphere, we would all get a break in the form of lower temperatures for awhile. Granted it might to terminally hot for those near the volcano.

Hate to say it, but anybody who deliberately chooses to live on or near a volcano forfeited their right to complain as soon as the ink dried on the mortgage. Even if the risk is one in a million, that is not the same as zero risk.

Ditto for the fools living near the San Andreas fault, too.

If this volcano keeps picking up steam, it just might lower global temperatures. The downside is that the island may not be in very good shape.

I bet lots of people are reevaluating the wisdom of living on an active volcano. Crops are one thing, residential development is unwise.

Some people are willing to take the risk. I don’t want to part of the insurance pool for that risk.

We gamble against Mother Nature pretty much anywhere we choose to live.

I wonder what the odds of a volcano eruption are against, say, a tornado in the Midwest, a hurricane in Florida, a flood…anywhere , etc.

Volcanoes can erupt with little warning, hurracanes can usually, with proper preparation, be weathered. I live in tornado country, and when I built my home I also built a reinforced concrete shelter under one end of the garage. When buying land I picked the site with potential flooding in mind.

So, I do not have to worry about being incinerated, or slow cooked, or being drowned or even being picked up by a tornado, because I have a safe shelter.

Location matters, as does planning. There is a reason that they cannot buy insurance.

I would advise all virgins to evacuate the island immediately.

I’ll chip in to fly YellowStainsInShorts out there.

We could put YellowStain on the volcano with that judge.

I bet he would be transformed into brown stain shorts if the volcano started speaking to him, when he became belligerent, the volcano might transform him into a tiny black smudge, incinerated so fast that he would not make a peep.

Actually, I think that even YellowGrifters probably don’t deserve this 🙂

If we don’t toss them into volcano then the rains won’t come and the crops will fail.

Just kidding. There are no virgins in Hawaii. I know. I did a very exhaustive study when I was in the Navy.

Did I miss something in science class? Is there some other kind of lava besides volcanic?

I watched a news vid of a field reporter on the same story. She said, “in aerial footage taken from above…..”

Hey, why don’t they just dump water on the lava like they did in Hollywood! That I’ll fix it!

It is the one place on earth where living in a mobile home makes sense.

There was a coastal fishing town in Iceland which did stop the lava, but they used A LOT of water!

Curious how the copters maintained any lift as that air had to be about 1/4 as dense as normal. One of my buds was under the copter that lost lift on Hood and he said it was most surreal thing to watch it drift off, and then suddenly they realized that rotor pieces were flying everywhere and there was NO place to hide. That 2 hr climb debrief was one of the more interesting evenings in my life