The U.S. military stands ready to assist with further evacuations, if necessary: 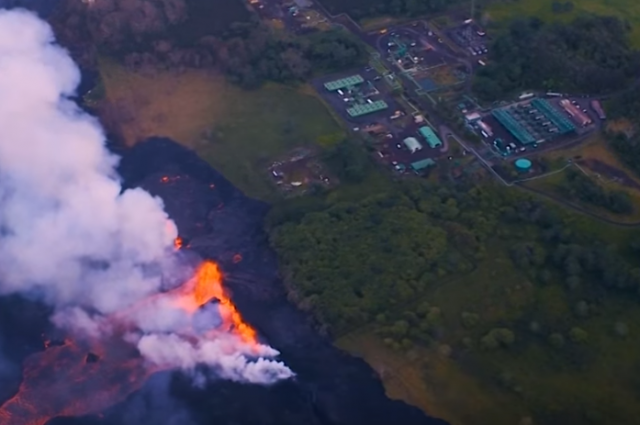 The last time we visited the erupting Hawaiian volcano, Kilauea, the lava from the steadily erupting volcano was threatening the Puna Geothermal Venture Plant.
Nearly one week later, the molten mixture has seeped over one of the plant’s wells.

Lava from the Kilauea volcano covered at least one well Sunday at a geothermal power plant on the Big Island, according to a Hawaii County Civil Defense report. The well was successfully plugged in anticipation of the lava flow, and a second well 100 feet away has also been secured, according to the report. The plugs protect against the release of gas that could turn toxic when mixed with lava.

The lava breached the property overnight. David Mace, a spokesman for the Federal Emergency Management Agency, said the flow started about 200 yards away from the nearest well. But he said safety precautions went into effect before the breach.

“I think it’s safe to say authorities have been concerned about the flow of lava onto the plant property since the eruption started,” he said.

The Hawaii Civil Defense Agency said all the wells remained “stable and secure” in a statement released Sunday night.

The agency said the evacuations were due to activity from fissure 7, one of 24 cracks in the ground that have opened in the island’s East Rift Zone since the start of the month. The fissure produced a large spatter rampart more than 100 feet tall from fountains reaching 150 to 200 feet, the US Geological Survey said Sunday.

Lava continued to creep across a road in Leilani Estates on Monday at a rate of 13 feet per hour, USGS Volcanoes said. The agency shared pictures of the steaming black piles, noting that methane bursts were audible in the surrounding woods.

The U.S. military stands ready to assist with further evacuations, if necessary:

Two U.S. Marine Corps helicopters are stationed in nearby Hilo Monday in case they are needed for an emergency evacuation.

“What we want people to know is if it’s coming, evacuate now. Don’t let us have to air-evacuate you out unless it is an absolute emergency,” Maj. Jeff Hickman, spokesman for the Hawaii National Guard, told Stars and Stripes. “Please evacuate so you don’t put first responders at risk.”

Hickman said that active duty military personnel could be called on to assist beyond Monday if the situation continues to look threatening to local residents.

Yeah you probably don’t want to get the bill for being helicoptered out of your property.

I wonder how high are insurance rates over there, and how high will they be after this.

There is no insurance for this, from what I understand.

As an example of a statement carefully scrubbed of any trace of useful information,

“I think it’s safe to say authorities have been concerned about the flow of lava onto the plant property since the eruption started,” he said

would be hard to beat.

Geothermal energy production has been talked up a lot as one of “green” energy sources, and when it works, it’s great. The problem with it is that it only is efficient at producing energy if you can put it on top of some live magma, such as in Hawaii, and also Iceland. The downside is that whenever the volcano you’ve built it on decides to go active, you lose the system and have to start over from scratch when things cool down, which is what is happening here.

My nephew lost his house to a re-erupted fissure’s lava flow on May 24. Somehow managed to get a picture that day – nothing but the metal roof sitting on about 6-8 feet of lava at house level with a ridge of lava appearing to be about 20 feet high beyond the house, his house being on the edge of the flow. Managed to get another picture 2 days later and the ridge beyond the house was up to about 50 feet high. Impressive stuff.

I’m a little curious, “The plugs protect against the release of gas that could turn toxic when mixed with lava.” What gasses are we talking about? So we have another zero emission power source that could produce toxic gas?

Who in their right mind would build a house on the slope of an active volcano?

Harry Truman (not the president).

USGS issued a response to question regarding roasting marshmallows over vent:

Would have been funnier had the USGS posted a link to the Darwin Awards (http://www.darwinawards.com/)