UPDATE: Iran regime’s Judiciary Chief has threatened those who participate in protests with execution. 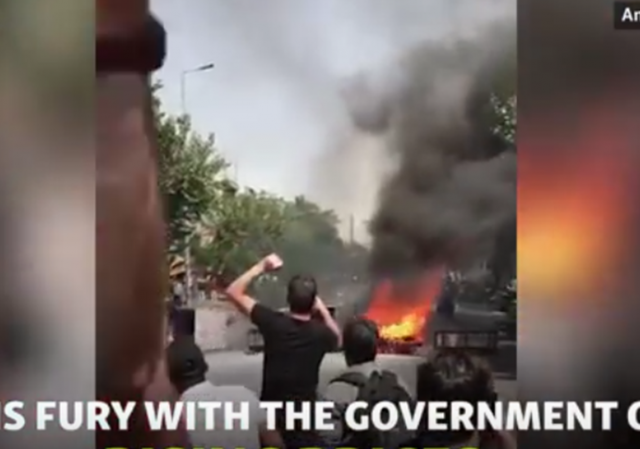 The last time we checked the status of Iran, President Donald Trump pulled us out of the hideous “Iran Deal” (much to the consternation of the European Union) and Israel’s Prime Minister Bibi Netanyahu made a video appeal directly to the Iranian people.

The tag-teaming may have worked, as thousands of protesters swarmed Tehran’s historic Grand Bazaar, forcing its shutdown, in anger over Iran’s now very troubled economy.

The spontaneous demonstrations came a day after protests forced two major shopping centers for mobile phones and electronics to close in Tehran. It also signaled widespread unease beneath the surface in Iran in the wake of President Donald Trump’s decision to withdraw America from Tehran’s nuclear deal with world powers.

Iranian news agencies described the protests as erupting after the Iranian rial dropped to 90,000 to the dollar on the country’s black market, despite government attempts to control the currency rate.

Riot police later fired tear gas to disperse the demonstrators as they marched towards parliament, the BBC reported.

Perhaps the most interesting aspect of the protests were the targets.

For those of you who do not speak Farsi, here are some more of today’s chants.

Professor Jacobson has been following the Iranian troubles in Syria, which are obviously a source of anger at Iran’s leaders by its citizens. Recently, a huge Iranian missile depot was destroyed.

The reference to Reza Shah is interesting, as he his popularity has increased as the nation has steadily declined. The son of the former shah, however, as no interest in taking the throne.

“My father was king, and I was the crown prince,” he told me in an interview this month. “I have always said to my compatriots: It’s not the form that matters, it’s the content; I believe Iran must be a secular, parliamentary democracy. The final form has to be decided by the people.”

…Pahlavi himself for more than 20 years has consistently said he is not seeking the throne. Today he takes no money from any foreign governments. Instead, Pahlavi sees himself as someone who can bring attention in the free world to the struggle for freedom in his native land.

There is precedent for a royal leader to take a democratically elected position. Simeon II of Bulgaria was king from 1943 to 1946, then came back as Prime Minister between 2001 and 2005.

Legal Insurrection readers will recall that after former President Obama declared Yemen a “success” story, the nation broke out in a civil war. The rebel Houthis were backed by Iran, and the national forces were supported by Saudi Arabia and eight other mostly Sunni Arab states.

The conflict has lasted 3 years, and Iran is now begging the international community to intervene because of recent defeats.

Iran has urged the international community to intervene and stop the Saudi war on Yemen, where an ongoing offensive against the Mediterranean port of Hudaydah has put the country on the brink of famine.

Foreign Ministry spokesman Bahram Qassemi told reporters in Tehran Monday that Iran is in contact with the regional and European governments in order to find a way to send relief aid and other humanitarian assistance to Yemen.

One last item for the Iran-focused news round-up. Truckers throughout the nation have been staging massive protests for the past several weeks.

On May 22, truckers in several towns turned off their engines to call for higher freight rates. While the government had ruled months ago that freight rates would increase by up to 20%, workers were angered that this promise had remained largely unimplemented. Truckers also called for higher pensions, better health insurance and cheaper truck repair facilities.

The protest spread like wildfire. Although the total numbers of participants is unknown, one sympathetic foreign union (the Teamsters) estimated the strike affected an unprecedented 160 cities in 25 out of the country’s 31 provinces. Iran counts over half a million registered truck drivers.

#Iran: Truckers’ strike in ‘Babai highway’ of capital #Tehran
On June 9, 2018, Truckers in Babai freeway started a strike & by parking their trucks in the highway, created a long queu for many kilometers. Truckers had instlled protest banners over theri vehicles. #IranProtests pic.twitter.com/wR9xceZWzW

It appears that the arrival of the infamous 12th Imam may be delayed a bit.

Looks like the regime is ready to throw down the iron fist.

Protesters are threatened with execution. But to the NYT and others, the Iranian leadership is “moderate”. Pray for the people of Iran – and hope this ends well. https://t.co/N3PljAA6BQ

It’s going to be interesting to watch – will the Iranian people allow themselves to be bullied into total submission like the Venezuelans have? I actually believe that the Persian people are far too old and proud to let that happen to them, but we shall see.

“Death to Palestine” and “Death to Syria”

First, death to all Clerics. Then Palestine, what sort of bounty should be offered?

If you care to, you can search on the terms “Iran burn the Quran.” Because the Iranians by and large hate the theocracy as much as I do. I always wondered why God made us capable of hate. Now I know.

The Iranians burning the Quran make it clear. They are not opposed to your personal Islam. Neither am I. They are opposed to the theocracy. So we are on the same page.

Why aren’t we helping these people?

“why aren’t we helping these people?”

You would be hard pressed to demonstrate this courage. On both party’s part. I get called an Islamophobe. But it’s the same way with the Kurds. I don’t actually care. Why aren’t we helping these people?

If I were a betting woman, I would say that we probably are. However, it won’t be obvious…President Trump doesn’t like to give away plans.

The work will be done, in some form or fashion, by our fun, new regional allies who would like to contain the threat of Iran. To support my hypothesis, I will note that the King of Jordan just had a pow wow with Trump this week.

So, stay tuned for another shocking foreign policy development, ala peace on the Korean peninsula.

I wish I could tell you. Can you keep a secret? So can I.

Oh, by the way, she was defending women who discarded the hijab during the anti-theocracy protests. The crime? Incitement to prostitution. I try to inform you that Shia and Sunni Islam is not really unalike. Sheikh al Hilali, the “Grand Mufti” of Australia and New Zealand made a name for himself by comparing uncovered women to uncovered meat. And you can’t really blame the cats because the uncovered meat is the problem.

And now “feminists” are adopting the hijab? The symbol that women are a man’s property? I am definitely not on board with that.

Can you keep a secret? So can I.

I agree with Leslie Trump seems to be all about results which makes we believe we are working with nations and groups within Iran who all share common interests in THIS situation.

I suspect going forward that we will act with those whom we share common interests with and less with long term relationships despite opposing interests.

When it comes to the Middle East you really do need a scorecard to tell the players apart.

These Iranian protesters decided they didn’t want the support of the American people after all.

“Iran regime’s Judiciary Chief has threatened those who participate in protests with execution.”

This is how real fascists react to “resistance.” The people in this country’s pretend “resistance” who puff themselves up by labeling their opponents fascists and Nazis are abject idiots and cowards. People protesting under the heel of actual fascism are the real heroes, not Robert De Niro, Kathy Griffin, and Rob Reiner, who are doing nothing but play-acting and posing. They’re despicable. (That’s worse than “deplorable,” isnt’ it?)

Now you know. I confess. I admire the female form.

I honestly don’t think that was what they were thinking.

They should have recruited more intelligent protesters. These dummies can’t pronounce America or Israel.