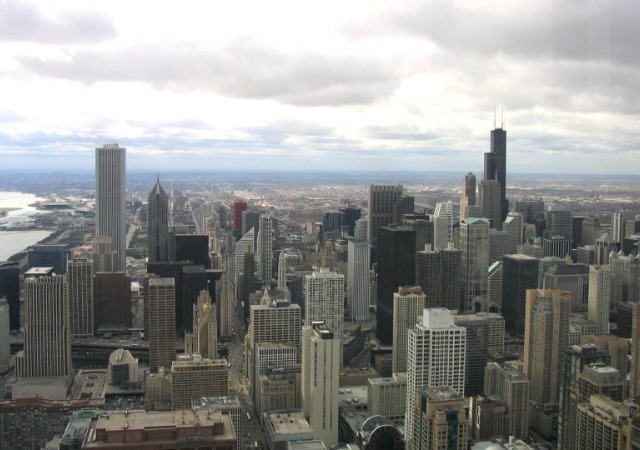 Eight other states experienced population loss, but Illinois lost the most. How could this happen in a state that has bustling Chicago? Gee, maybe the bad economic policies?

I grew up around Chicago but now reside in Oklahoma. I would love nothing more than to move back home. Chicago will always be home, but I will not go back until the state figures out its debt problems and eliminates the corruption.

Seems like I’m not the only who has seen the light. America’s working-age population grew by .4% between July 2016-July 2017, but Illinois dropped in that age group by .8%. From Illinois Policy Institute:

Illinois’ population ages 0-14 shrunk by 1 percent over the year, but that population nationally saw a small increase over the same time. 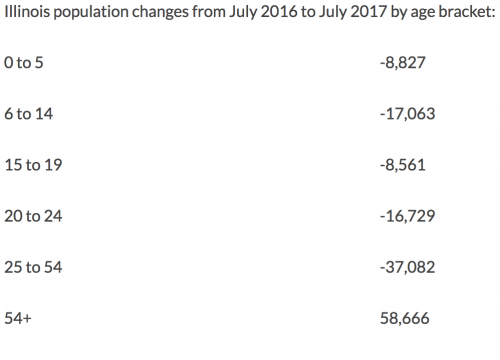 The Illinois Policy Institute found income growth is stale in the Land of Lincoln:

The state of Illinois’ economy is one reason the 2017 tax hikes were such a poor policy choice. By costing the state thousands of jobs and billions of dollars in economic activity, the recent tax hike will exacerbate the state’s outmigration crisis. State lawmakers cannot continue to rely on tax hikes if they want families to bet on Illinois.

The Chicago Tribune spoke to Marzena Maka, 25, and Nick Gitchell, 24. Both work downtown and live in Chicago and have seen friends move to places like Texas due to lower living costs. Maka lives in Garfield Ridge, located on the southwest side, and would like to move closer to the Loop, but the cost of living has hampered those plans.

Gitchell grew up in the suburbs, but would eventually like to leave due to “the cost of living.”

University of Illinois at Chicago professor Janet Smith and other researchers discovered that Chicago lost a large chunk of the middle class, leaving Chicago with a population “on opposite ends of the income spectrum.”

PNC chief economist Gus Faucher said the industry growth in the suburbs may attract a lot of millennials to the metropolitan area. Losing such a large population could cause major problems for Chicago:

“If the population is not growing, that could lead to economic stagnation,” Faucher said.

Job growth in the Chicago area has lagged behind other parts of the country, and that along with a high cost of living and crime could all entice millennials to move elsewhere, Faucher said.

In some cases, the beneficiaries could be other Cook County communities that have access to urban amenities — at a lower price.

Illinois as a Whole

While Chicago plays a major part in Illinois, we shouldn’t discount the rest of the state. After all, the laws passed affect those areas, too. The Illinois Policy Institute stressed that the state must change its “unfriendly business environment that discourages investment and job creation, and punishes residents with high taxes.”

Illinois finally passed a budget last July after a two-year stalemate, but it didn’t do much to help and the Democratic legislature pushed through a $5 billion income tax-hike. The bill also included a corporate tax hike, making the state even less business friendly:

The budget plan would spend more than $36 billion on primary and secondary education, colleges and universities, social services, medical care for the poor and other government functions, with nearly $5 billion in new taxes to help pay for it. The personal income tax rate would rise from 3.75 percent to 4.95 percent. The corporate tax rate would go from 5.25 percent to 7 percent. The plan also would have the state pay down about half of the nearly $15 billion pile of unpaid bills through a combination of borrowing and using cash from other state accounts.

The comprehensive annual financial report for the fiscal year that ended June 30 showed the deficit more than doubling on a budgetary basis, to nearly $8 billion from $3.54 billion in fiscal 2016. Fiscal 2017 also marked the 16th straight year of deficits for the nation’s sixth-largest state.

“This report makes clear that Illinoisans continue to pay the price for the state’s disastrous budget impasse, in the form of late payment interest penalties and a state government that is weakened at almost every level by the inability to pay its bills on time,” said Jamey Dunn, spokeswoman for Democratic Illinois Comptroller Susana Mendoza.

Illinois has to stop spending. The state legislature passed a budget this month and I think it only happened because none of the lawmakers want to have a stalemate on their shoulders for elections in November. Yes, even Republican Governor Bruce Rauner approved and signed the bill:

They also reflected the changed dynamics at the Capitol, where Rauner for the first time focused on achieving a stand-alone budget rather than a broader deal that included his legislative agenda aimed at reducing regulations on businesses, freezing property taxes and reining in politicians’ power.

Instead, the governor asked only for a budget that spends no more than the state takes in and requires no new taxes. That’s what lawmakers say they are sending him — a task made easier by several billion dollars from a tax hike that was passed last summer over Rauner’s objections.

Left for another day were some of the state’s most pressing financial problems: A backlog of unpaid bills that stands at $6.6 billion and a massive pension debt that’s on track to consume a growing portion of Illinois’ annual revenue.

Also set aside was Rauner’s call for retirement system changes that he said could allow for a modest quarter-percent rollback of the state income tax. The plan projects $445 million in pension cost savings through voluntary buyouts, but it spends those savings rather than returning them to taxpayers via lower taxes.

Rauner noted to the media that the budget does not have enough to lower Illinois’s debt “and reforms that would reduce taxes, grow our economy, create jobs and raise family incomes.”

In that world view, Socialism has failed everywhere it’s tried because it simply wasn’t done by people smart enough to do it right.

This is just proof that all the ignorant don’t understand how mush better it is for everyone – especially the Socialists at the top – when everyone else bows to their demands.

Illinois West Virginia and Wyoming seem to be in the biggest trouble having back to back years of loss.

IL is the Red Hen Cafe of states……

No policy change can fix it now, it’s too late.

You might as well go ahead and get a “Soonner” tattoo.

In the words of Dr Evil, “Rigggggght’

The company my husband worked for transferred him to Cook County in the 70s. Things were going really well for him at work, and I was settling in OK when he came home one night and said, “Let’s get out of here. One more promotion, and we’ll be stuck here for a long time.” We left after 3 years, and he continues to believe it’s the smartest professional decision he ever made. We were in our 20s.

It entirely changed the culture at Boeing. It will take a miracle too fix it.

they’ll do the same as California, double and triple or better down on the bad policies

IL is collapsing, and I have warned friends and relatives there to get out before property (and other) taxes start going up 30 – 150% automatically without notice or action.

It is literally on the path to financial destruction and unlike Detroit, there is no state bankruptcy process.

Years of corrupt Democrat machine politics has destroyed a once powerhouse state. IL has no tax base left, and what little remains will be crushed by tax increases required for unaffordable entitlements.

The fish rots from the head. And nowhere is this more true than Illinois which is dominated by Chicago, a city which literally prides itself on its political corruption. I left this fetid shithole at 18; if they try to tax me to “bail it out” I will be ready to fight. As in civil war v2.

Ah ,,, another demoCrap SHITHOLE going down the toilet. Detroit, San Francisco, Seattle, NYC ,, they keep racking up debt to pay for their asinine policies.

LA, DC, New Orleans, Atlanta, Detroit, Saginaw, Flint, Newark Pittsburg, we have shithole. Part of the problem is allowing the dredges of society to have welfare babies. That is their cash crop.

There should be a requirement that anyone on public assistance has mandatory implantable birth control and be subject to losing custody of their children if they have additional children.

I cannot see any other way to break back of the welfare culture, a culture where children are raised so poorly that their future is a life of crime.

I don’t think they all moved. They were victims of Chicago’s gun-free policies. Murdered by violent criminals who have no fear of armed citizens. The murder rate is horrendous.

I left Chicago for Detroit in 1991. At the time, Michigan was a basket case and Illinois was in relatively good shape. Today their roles are reversed. Chicago/Cook County controls Illinois. In Michigan, there are more than enough votes outstate to override Detroit, Flint and Saginaw.

…and there are many of us still stuck here for various reasons, counting the days until we are able to escape the nightmare known as Ill-annoy.

Don’t worry, it gets worse: they are seriously floating the idea of raising the gas tax by 85 cents a gallon. Fun times! And, there is talk of raising the price of license tags from $101 (thirty years ago when I was in college, it was only $48), to north of $500 per annum. Ill-annoy is constantly cooking up schemes to rape its citizens coming and going.