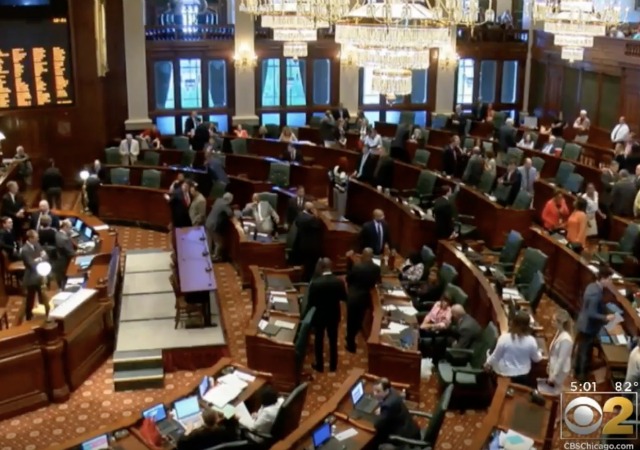 The Illinois House voted to override Republican Governor Bruce Rauner’s veto of the income tax hike and budget bill. This is the first budget Illinois has passed in two years.

The House voted 71-42, which is the bare minimum House Speaker Mike Madigan needed, after a security incident delayed the vote for two hours.

The House passed the tax hike and budget bill on Sunday with 72 votes, including 15 Republicans. A few flip flopped, according to The Chicago Tribune:

On Thursday, there were some slight changes. One lawmaker who previously voted for the income tax hike on Sunday, Republican Rep. C.D. Davidsmeyer of Downstate Jacksonville, voted against the override. Democratic Rep. Sue Scherer of Decatur had voted against the tax hike on Sunday but voted in favor of the override Thursday. In addition, Rep. Robert Pritchard of Hinckely voted for the tax hike Sunday but was absent Thursday.

The Republicans lacked five representatives with excused absences. One of those voted yes for the bill on Sunday.

Rauner lashed out at the bill on Wednesday as he went around Springfield to try to change the minds of those who voted for the bill. From ABC7:

The first-term governor, already facing several Democratic heavyweights hoping to displace him in the 2018 election, took to the trail Wednesday to implore the House – run by Speaker Michael Madigan of Chicago – to sustain the vetoes.

“This is not just a slap in the face to Illinois taxpayers. This is a 2-by-4 smacked across the foreheads of the people of Illinois,” he told reporters at a bar on Chicago’s far South Side. “This tax hike will solve none of our problems. In fact, in the long run, it will make our problems worse, not better.”

The bill includes an income tax and corporate tax hike and a budget plan of $36 billion:

The budget plan would spend more than $36 billion on primary and secondary education, colleges and universities, social services, medical care for the poor and other government functions, with nearly $5 billion in new taxes to help pay for it. The personal income tax rate would rise from 3.75 percent to 4.95 percent. The corporate tax rate would go from 5.25 percent to 7 percent. The plan also would have the state pay down about half of the nearly $15 billion pile of unpaid bills through a combination of borrowing and using cash from other state accounts.

Illinois’s crating rating is still just a notch above junk. Madigan got all excited because Fitch Ratings and S&P Global Ratings urged Rauner to sign this bill on Sunday. But Fitch told Madigan to calm down because even with the override, nothing guarantees these rating companies will not drop Illinois to junk. From The Chicago Sun-Times:

During that lag, Moody’s Investor’s Services on Wednesday offered a stark reminder, placing the state’s current rating of Baa3 “on review for possible downgrade.” Moody’s and two other credit agencies had warned lawmakers of a “junk” downgrade should they not enact a budget by July 1. But last week, S&P and Fitch called the passage of the budget bills progress.

Still, according to Moody’s, “despite the progress toward budget balance” in the legislative package, “… the plan appears to lack concrete measures that will materially improve Illinois’ long-term capacity to address its unfunded pension liabilities.”

That’s because the budget bill lacks…A LOT. Illinois has “unpaid bills to state contractors and vendors that’s reached about $14.5 billion and roughly $130 billion in unfunded pension liabilities.” Last Friday, a judge ordered the state to “start paying $293 million in state money toward Medicaid bills every month and an additional $1 billion over the course of the next year.”

The House should have started its session at 1:30PM CT, but emergency officials had to lockdown the building “after a woman allegedly threw a powdery substance in the governor’s office.”

Build a wall around Illinois. Let it burn on its own. Then build one around California too.

Being a Hoosier, I was going to post something similar

Some of us,….essentially outside of urban CRook County…REALLY want out!

Build it fast! I live only a few miles on the sane side of the Illinois/Wisconsin border and I can all ready hear the patter of little feet as tax refugees head our way.

The problem with that is once they get here most of them want all the things they wanted in Illinois with out the tax folly.

Just curious…does one have to be an adult to be a lawmaker in Illinois?

The State of Illinois generally, no. They do have some very good people from down-state serving in the Legislature.

But I think having a rational (“adult”) mind is a disqualifying condition in Chicago, which has the population density to override the rest of the state.

notamemberofanyorganizedpolicital in reply to TX-rifraph. | July 6, 2017 at 8:33 pm

Remember the Ill state gave us Hillary and Obama.
(Hillary was born and raised in Chicago.)

Just wondering. Are the tax increases retroactive like the Kansas Ram and Cram bill that the Dems and liberal Republicans mashed through? We’ve got a whole state full of taxpayers who are juggling their numbers, because the Kansas penalties for underpaying estimates are nasty, and the withholding tables are biased in favor of catching taxpayers in just that fashion.

They are retroactive only to July 1.

Leftist “tax and spend” policies got them into this mess, so naturally, the Leftists think doubling down — “tax MORE and spend MORE” — will get them out of it.

It’s well known that Leftists can’t do math or economics, but how badly must they have failed those classes to think that debt graphs are circular (i.e. if you borrow and spend enough, eventually you come back around to where you started, with no debt)?

notamemberofanyorganizedpolicital in reply to Archer. | July 6, 2017 at 8:35 pm

Archer in reply to notamemberofanyorganizedpolicital. | July 7, 2017 at 12:18 pm

Beating out California, even?

Wow, that’s a feat in itself!

If the money Chicago liberals spent on behalf of the government was traced, we’d be directed right to their pockets.

“Tax and spend” is merely “take and keep” for the democrat party. Of course, a few crumbs get distributed to the needy, and a lot of money finds its way into street thug armies.

But “tax and spend” is merely corruption.

At this point, the “leftist tax and spend” theory is stale.

Yes, but in a socialist utopia, the government dictates what kind of bread is allowed to be sold. Stale or not, they don’t allow anything else to be offered.

If the money Chicago liberals spent on behalf of the government was traced, we’d be directed right to their pockets.

Of course we would. The government officials who run the socialist utopia get to direct the money anywhere they want. Naturally, they’re going to keep themselves comfortable first. It happens every time.

“Tax and spend” is merely “take and keep” for the democrat party.

“Tax and spend” is wealth redistribution by another name, and yes, it is highly prone to corruption.

I posted on so-called “wealth redistribution” on my blog a while back. To whit: The purpose is not to help the poor, but to further separate the wealthy “elite” from the poor and middle class — to burn the generational bridge that allows people to improve their “station” in life.

The “elite” want to stay “elite”. Wealth redistribution (which includes “tax and spend”) serves multiple purposes: it makes it harder for normal people to join the “elite”, and it generates huge profits for those “elite”, all the while making them look like benevolent philanthropists. In the long run, it’s win-win-win for them. It’s lose-lose-lose for the rest of us.

The best part of this chuckle-fest is when the all the tax money starts flowing in … LOLOLOLOLOLOLOOL … NOT.

All politicians should have to know the definition of this. Good luck with all the money you expected Illinois … looks like the boot of economics is going to step on your ignorant face.

Most Leftist think tanks I’ve read about peg max global tax ceiling at around 70 to 80% without undo “harm” to the economy. Years ago I read the cost of welfare benefits in NYC was over $50K per family…. any new data on that?

Hell, the personal income tax rate is higher in North Carolina at 5.75%. I always pay more in state taxes than federal. It sucks.

and i’m good with the “wall around #Failifornia” idea, as long as you let me out when i’m ready to escape.

That makes no sense….why should you have to pay tax on tax payments? That’s federal robbery. The only real inequity is that states without an income tax can deduct their sales tax…in states with both, we are somewhat screwed out of that deduction.

Guess where obama got his political training? Do we need to ask why he did what he did to our country?

All taxes are paid by the end user of the product or service. The corporate taxes are simply product costs. The impact of this irresponsible tax increase is to:
1) Make all Illinois produced products more expensive and less competitive.
2) Reduce the disposable income of Illinois taxpayers.
3) Reduce employment opportunities as some businesses will need to relocate out of Illinois to remain competitive.

These effects are why the left needs economic controls such as climate change so ALL states have high taxes, less freedom, and lower standards of living. Then, you just extend that control globally (EU) and the ruling class can do what they want to the serfs and the serfs have no place to move to.

Absent of those universal controls, I do not see how this tax increase can do anything but cause further harm to the people and businesses that remain in the state. The state employees will see their retirement checks bounce for NSF. Sad.

The Detroitification of Chicago will continue apace. Illinois has no special lock on any local resource that neighboring states lack — there’s going to be a great white flight from there for the next couple of decades.

Rauner should resign and wash his hands of the whole thing.

Some taxes are more visible than others: if you live in Chicago, you get hit with a salex tax of 10.25% every day, in (almost) every way.

So, the state income tax is back to 5.0% or so. Which is certainly lower than many other states, but, an IL state income tax form is very simple because, after a standard deduction, there’s very little that’s deductible.

In any case, the income tax hike should help the Governor’s campaign, for at least some IL taxpayers realize that no matter how high the tax rate goes, it can never be high enough to pay for everything the legislature wishes to buy with it.

If Rauner thought as Governor he “ran” the state he has now been disabused of that notion.

From time to time the voters will get so disgusted with the rape and pillage by the Dems that they vote in a Republican. The Republican isn’t allowed to change anything but they get to live in the Governor’s Palace and make speeches.

Mike Madigan runs Illinois and has for a very long time.