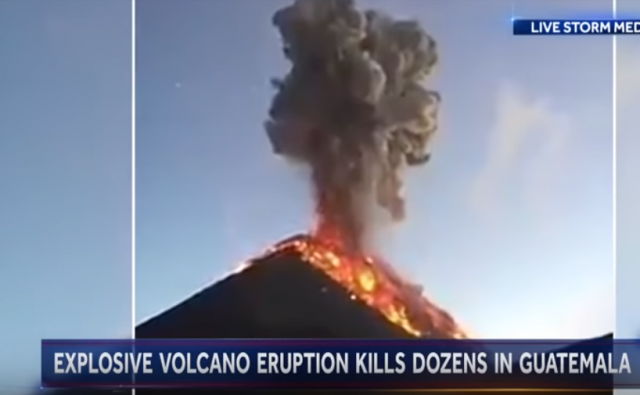 Hawaii’s Kilauea volcano continues to erupt, oozing lava that is causing even more property damage and personal heartbreak for hundreds of families.

Mounting property losses were reported a day after five or six people who initially chose to stay in the newly evacuated Kapoho area after road access was cut off were rescued by helicopter, according to the Hawaii County Civil Defense agency.

All but a few of the estimated 500 inhabitants of Kapoho and adjacent Vacationland development are now believed to have fled their homes, an agency spokesman said. The area lies near the site of a seaside village buried in lava from a 1960 eruption.

Legal Insurrection readers may recall my review of different lava chemistries and why Kilauea would not erupt as explosively as something like the more infamous Mt. St. Helens. However, one volcano in Guatemala had the right mix for an explosive release, and now over 60 people have died during its eruption this Sunday.

The bodies of those who died in the Volcan de Fuego, or “Volcano of Fire,” were recovered after Sunday’s eruption. Only 13 of those who were found have been identified.

At least 46 others were injured, and authorities said the death toll could rise with the number of people unaccounted for.

This type of volcano ends is eruption cycle quickly, after emitting a deadly mixture of ash and hot gas.

Volcanologists report the eruption, which sent ash up to 10km (33,000ft) into the sky, is now over.

…Jorge Luis Altuve, part of Guatemala’s mountain rescue brigade, told the BBC how he and his colleagues had been up on the mountain searching for a missing person when they realised that the volcano’s activity had suddenly increased.

He heard something hitting his safety helmet and realised that it was not rain that was falling but stones.

“We’d already started our descent… when the ash cloud reached us and day turned into night. From daylight it went to being as dark as at 10pm,” he said.

I wonder if the volcano(s) had anything to do with the collapse of the Mayans.

You got me curious so I Googled it.

While scientists still aren’t sure, the latest evidence suggests waves of small localized collapsing, followed by the 1st large collapse, followed by a recovery, then ending with the 2nd large collapse. Over the span of 700 years.

I wonder if they have a frequency (or whatever term they use) for that volcano thst fits inside that window. Probably not precise enough to be useful.

Thanks for the fun quest 🙂

“Turn to page 132 please. Today we will cover the Hawthorne-Fen Hypothesis which accounts for current theory on the fall of the Mayans and has remained unchallenged for 200 years.

Oddly enough, the first lead came from a Merican Savage who casually speculated that volcanic activity might be related to 2 significant collapses in Mayan civilization.

This idle banter was accidentally overheard by Dr Katrina Hawthorne who quickly ran the numbers and fine-tuned the theory for publication.

There is still some disagreement from historians (see Insurrection Files) that the original suggestion came instead from a Countess Cincy Jan and not the savage Fen, but those records were lost in the SMOD Event of 2350.”

Leslie, please stop reading ahead of the class. We discussed this at our last parent teacher conference, remember?

I wonder if the volcano(s) had anything to do with the collapse of the Mayans.

I know several anthropologists and archaeologists who’ve worked for decades in that general area, and none of them have mentioned volcanoes as being a significant factor. That having been said, at least three Maya settlements are known to have been destroyed by volcanoes: El Cerén in El Salvador (http://www.ancient-origins.net/news-history-archaeology/mayan-pompeii-remarkable-ancient-village-preserved-ash-emerges-el-salvador-020608) and two by eruptions of El Chichonal in Chiapas, centuries before its 1982 eruption that killed thousands.

In addition, Santa Marta and Tacana, near the Chiapas-Guate border, are known to be dangerous. The Santa María eruption in 1902 was one of the three largest of the 20th century (https://en.wikipedia.org/wiki/Santa_Mar%C3%ADa_(volcano)).

Have been down to Guatemala a few times – down that highway from Antigua around the Volcan de Fuego over to Neuva Conception – hardly noticed that one. The La Reunion Golf resort is right on the edge of the dry river/arroyo bed that pyroclastic cloud barreled down. So sorry for those folks that couldn’t get out of its way. Guatemala has like 9 active volcanos – very striking geometry – lush green mountains with ruler-straight 45degree slopes up to a cone. Several have a little smoke coming out of them, often the peaks are hiding in the clouds. Every few years you’ll wake up to 1-2″ of volcanic ash….very scary to think you can get used to just living your life in shadow of volcanos and massive earthquakes every century or two…

People live on/near volcanos because they typically have really rich soil, and as most follow the ring of fire, are near water bodies with good precipitation. I have two active volcanoes within 50 miles and think nothing of them, and the Willamette Valley is testimony to the agricultural benefits of living nearby. But in most cases, those volcanos periodically come along and wipe out large chunks of the local population. But think about it as a relative risk. 600 years between events means that 23 generations have it good and the 24th gets screwed. Cascadia might rupture before I finish this message, but it may also not do squat for another 100, 200 years. I can live with that. I have a buddy in Kansas, and we SWAGGED (scientific wild ass guess) that houses there have about a 1:200 chance of getting hit by a tornado each year. So basically, 99.5% of all houses are fine each year. What I can’t understand are the people who live in Hurricane zones. And that is if you make it past the fist sized bugs.

And as I stated before, Kilauea is the only place on earth where living in a mobile home makes sense.

Hurricanes are much the same level of risk, and not that common for any specific area either – recall that Harvey last year was the first hurricane to make landfall in the US in 12 years. And even Harvey didn’t do all that much wind damage, it was the incredible and unusual rainfall that caused so many problems.

The only places that are really risky are those right up close to the sea, but you know that people will put up with almost any level of risk to live right up on the beach, next to a warm ocean.

I think that most people are not very good at assessing risk, take Japan and their reactors as one example. How about Houston, building where flooding can be 30′ deep. I can see building elevated homes where flooding might at most be 8′-10′. But not where 30′ can happen.

IIRC, the issue with the Jap reactors was that the fuel supply hadn’t been hardened as well as the generators which were fine. It was a supply chain SNAFU. The diesel tanks just washed away. And, we are still finding plastic bottles with japanese labels on beaches in Oregon. Tsunami dynamics is as interesting a field as volcanoes. Do not live along a river with a funnel shaped open harbor or the concept of lensing will become very relevant. A foot at the coast can translate into 6 ft upstream as all the “volume” of water gets pushed into a narrow channel, and that 5mph wave at the coast similarly gets to 30 mph 5 miles upstream.

BTW, those unedited tsunami vids on the web are incredible. To them, Kilauea is like watching sand castles being built vs D-Day on Omaha, speaking of which, I salute those who came before me for their service. There is also one vid where some TV people went back and interviewed the people they could locate who were on the more famous clips. Note to self, elevation is your friend.

Generators were below ground level and submerged by tidal wave. The reactor that failed had been “repaired” when warped by improper heat treatment. Fuel rod storage on second floor.. above ground level.

“The reactor’s emergency diesel generators and DC batteries, crucial components in powering cooling systems after a power loss, were located in the basements of the reactor turbine buildings, in accordance with GE’s specifications. Mid-level GE engineers expressed concerns, relayed to Tepco, that this left them vulnerable to flooding.”

Two generators were on higher ground but switching station wiped out.

Oh, and if you get a chance, read Volcano Cowboys. A wonderful and educational look at a field that exploded in 1980.

I cannot fathom as to why people would build homes on the side of an active volcano. It’s like punching a bully in the nose and expecting no adverse consequences.