Though spectacular, the eruptions will not be as massive as Mt. St. Helens. 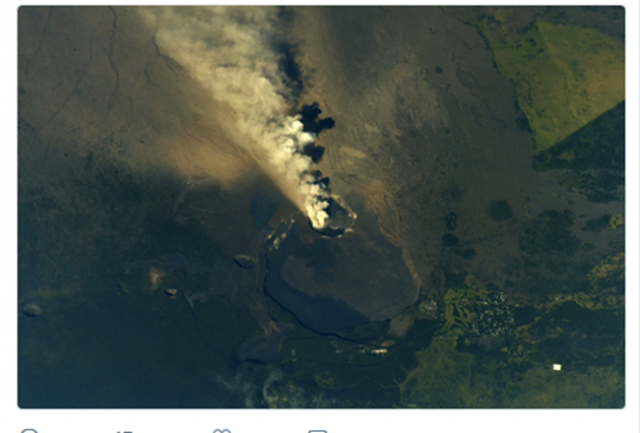 As predicted, Kilauea erupted violently on Thursday morning, spewing lava bombs and ash into the atmosphere.

Kilauea is causing huge fissures to rip open the ground on the Big Island, with 22 now exposed in Puna.

Reporting in the early hours of Friday morning in Hawaii, Matt Gutman said: “You can see it gurgling and bubbling that lava dozens of feet into the air.

“What’s incredible is that we are actually seeing molten rock ooze down the hill. That rock is 1100 degrees. You can see it over there another fissure bursting and just beyond that trees, smoking, they have just been lit on fire.

Perhaps the oddest report made during this continuing natural disaster was the fact that golfers were continuing to enjoy the greens at the Volcano Golf Club prior this major eruption.

Since the Thursday eruption, there is a new term that is now entering the collective vocabulary: Vog.

Vog (volcanic emissions + smog) results when sulfur dioxide and other gases react with oxygen and moisture in the presence of sunlight and is now the reason thousands of dust masks are now being distributed to Hawaiians.

Hawaii County officials had distributed about 2,000 N95 masks, but cautioned that they would not protect against gases and vapors.

The sulfur dioxide was an immediate concern to people living near the fissures. However, the ash was ranging farther from the mountain. Winds blowing a plume emanating from crater 30,000 feet in the air were mostly directing it away from people.

The event has sent Hawaiian homeowners on a quest to get volcano protection included in insurance policies.

…Because the community sits in a zone deemed by the U.S. Geological Survey to have a high risk of lava, few insurance companies will issues policies there.

But homeowners are not without options. One possibility is the Hawaii Property Insurance Association, a nonprofit collection of insurance companies created by state lawmakers in 1991 to provide basic property insurance for people who are unable to buy coverage in the private market.

The horror of seeing houses turned to ash has motivated some people who went without insurance to scramble to purchase a policy. The association announced last week that it would issue policies to uninsured homeowners in the affected area – but they will have to wait six months.

May 18th was the 38th anniversary of the eruption of Mt. St. Helens in Washington. One worry that has been expressed is that there will be a more violent eruption of Kilauea that will impact the region as significantly as the Northwest’s infamous volcano.

Such a massive eruption will not occur because the chemistries and geology of the two volcanoes are different. Hawaiian magmas are “runnier” because they contain more metal and less silica.

As a reminder of the Mt. St. Helens disaster, here is video:

57 people died during the 1980 event, which generated 540 million tons of ash. Mot of the volcano’s victims succumbed to asphyxiation by gases or hot ash. While there are no reports of death and serious injury, I urge those who want to get “up close and personal” with the volcano to be cautious.

The dust masks will not offer protection from toxic gases or refrigerator-sized lava bombs.

I thought the Soviets had dropped the big one on the first eruption. The mushroom cloud was huge.

With the second one our roof was covered in ash and I had to go up to scrape it off to prevent it collapsing. It was like dirty snow.

Oh my. I thought that photo was of Schulmer, Pelosi, or Feinstein.

“Pelosi’s Trump-hate runs so deep she ‘straight up’ defends MS-13: ‘There’s a spark of divinity in every person’

“Over the last couple of weeks, the Democrat Party has come out on the side of the terrorists who planned 9-11, the fanatical mullahs who run Iran and foment global terror, and the murderously violent street gang MS-13 who are known for hacking people to death with machetes.

The attacks against CIA nominee Gina Haspel are particularly disingenuous. If she had been nominated by Obama, the Democrats and media would be replete with stories about courageously shattering the glass ceilings at Langley by appointing the first female CIA Director.

Instead, they thought about bringing one of the terrorists who plotted the 9-11 attacks in to testify against her…..”

TheFineReport.com in reply to notamemberofanyorganizedpolicital. | May 19, 2018 at 6:48 pm

““Pelosi’s Trump-hate runs so deep she ‘straight up’ defends MS-13: ‘There’s a spark of divinity in every person’…”

Lock the witch in a room with one of them overnight.

Though spectacular, the eruptions will not be as massive as Mt. St. Helens.

With luck that prediction will hold up better than my local weatherguesser’s forecasts.

There is no connection between the process of estimating a volcano pattern of eruption and your daily weather forecast.
You’ll note that there is no specific prediction of when it will end, only a description of what types of eruptions are possible at this site.
The only similarity is that both reports appear on television.

Since gospace mentioned weatherguessers, how will the vog impact the next few years Global Cooldown?

Vog has been with us for 30 years, ever since this eruptive phase started. It is primarily in Kona and fortunately pretty much misses Hilo, Kamuela, Maui, Honolulu, and Kauai.
The lava is moving fast now, it is a pretty good sign. it means the old, slow moving lava from the 1955 eruption has been cleared out and makes a clog in the system less likely. Clogs equal explosions when water is present.

One glaring omission from most of the coverage of this new lava flow is the affect it may have on the agriculture of the big island. Every acre of crop/orchard land lost to the lava makes the State of Hawaii more dependent upon imports of food/export income.

I suppose that when they secede it will make it easier to blockade them, but we already hold the advantage. As far as I know, Spam is not made on the Islands, and therefore we can bring them to their knees by cutting off shipments of canned spiced pork shoulder and ham. They will suffer the pains of Spam musubi deprivation.