End of Merkel? Germany’s Coalition Gov on the Verge of Collapse

End of Merkel? Germany’s Coalition Gov on the Verge of Collapse 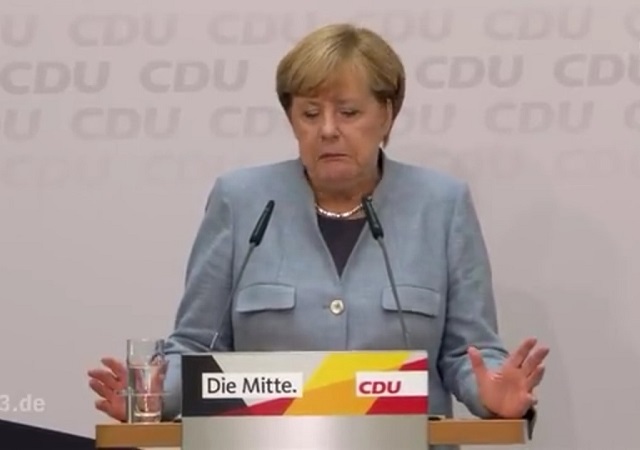 Just three months into her fourth term, Germany’s Chancellor Angela Merkel faces the biggest crisis of her career. Her Catholic conservative Bavarian ally, the CSU, has threatened to abandon the coalition government over immigration policy.

Germany’s Interior Minister and long-time CSU leader, Horst Seehofer, wants to push for tougher immigration laws, which will include refusing entry to illegal immigrants at the border. According to German newspaper reports, if the country’s Interior Minister goes ahead with the new restrictions without Merkel’s consent, she will be forced to fire him, putting an end to her freshly-baked coalition government. Her political future hangs in the balance, as CSU leaders meet on Monday to decide the future course of action.

Catholic conservative CSU party’s new-found zeal to curb migration may have lot to do with the upcoming state elections in Bavaria, where the party faces stiff challenge from the right-wing Alternative for Germany, or AfD party. “I can’t work with this woman,” Seehofer said referring to Merkel, German newspaper Die Welt reported.

Frustrated with Merkel’s refusal to compromise on her policy of open doors for illegal immigrants, CSU’s Seehofer is seeking to create a European alliance against unregulated migration. As German business daily Handelblatt reported on Wednesday: “In a dangerous swipe at Chancellor Angela Merkel, her own interior minister is siding with the Austrian and Italian governments to forge a right-wing “axis of the willing” to curb immigration.”

“Chancellor [Merkel] Needs to Turn Around,” demanded the editorial published in the German mass-circulation daily Bild‘s Sunday edition. Explaining the severity of the standoff, the newspaper wrote:

On Monday, Interior Minister Horst Seehofer will present measures to turn away asylum seekers to a safe third-country.

Chancellor, so far, has been strictly against such a move. If Seehofer goes ahead with it, Merkel will have to fire her Interior Minister. That will be the end of the government.

This is pure madness.

Angela Merkel is thereby risking the political stability of the country, the elected government, the unity of her proud party, and a new election with further rise of the radical forces. And all this for a policy that vast majority of people in Germany and her party don’t want anymore.

These are drastic words, coming from a newspaper that ran a #RefugeesWelcome campaign in the autumn of 2016, rising money and public support for Merkel’s open borders policy.

Merkel, an astute politician, understands the gravity of the situation and has called for an emergence European Union talks to be held as early as next weekend.

She is expected to push for the so-called ‘European solution’ on migration. The measure will allow the EU to force member countries to resettle hundreds of thousands of migrants, a move bitterly opposed by the Eastern European countries. This could pacify her Bavarian coalition partner for some time, but divide the EU.

Merkel finally may have run out of good options. If she manages to save her chancellorship next week, she risks undoing her pro-EU legacy. If she survives the coalition crisis, this may come at a heavy price for her globalist agenda. Ramming down demands on unwilling EU member states to save Merkel’s coalition government, is set to fuel anti-establishment sentiments across Europe, especially in the East.

After 12 years at the helm of Germany, Merkel’s career may well be coming to an end. A career that began in the early 70s with the youth arm of the East German Communist Party, where she served as the secretary for ‘Agitation and Propaganda,’ or agitprop. She has never apologized for the role she played in the oppressive East German Communist system.

Neither has she expressed any regrets for her policy of open borders that flooded Germany and Europe with millions of illegal immigrants, mostly men from Arab and Muslim countries. The country has been the grip of migrant crime and suffered from a string of deadly Islamic terror attacks ever since. “I cannot see what we should have done differently,” unrepentant Merkel declared last September.

Merkel’s sudden departure won’t end Germany’s woes. The country will be occupied for decades coping with fallout from her disastrous open borders policy.

This would be a bigger takedown than Trump of Hillary.

She is a dangerous loon. Bernie Sanders in high heels.

Don’t worry about this mutti futti Merkle cause there is much worse coming your way………….

I just watched this video: “The greatest betrayal so far – The Marrakech Declaration” https://www.youtube.com/watch?time_continue=6&v=lNn6QNjhDaE Just removing Mutter Merkel isn’t going to stop anything, just slow the flood down. She should have been stopped 10 years ago, along with the EU and anyone with their agenda.

The world is going to be upturned like a basket of rotten figs, letting the trash fall where it will. This should make the Democrats and One-Worlders happy, but few others.

Germany, and the rest of Europe, need to start expelling large numbers Muslims and their spawn, they are like locusts, destroying everything in their path. Unchecked, Muslims will bring on a new dark age.

Funny how so many people who go after President Trump seem to not have good outcomes. Perhaps she can go boating with Jeff Flake.

“On Monday, Interior Minister Horst Seehofer will present measures to turn away asylum seekers to a safe third-country.” You just know such a country will step right up to the plate. Probably in a non Muslim African country or a Muslim country in Africa or the Middle East or farther East. The future existence of Europe is in the balance. Which country?

This might be a case of managing expectations. They might be making it look more dire for Merkel than it is so that when she squeaks by they’ll call it a massive win.

If Merkel’s suicidal obsession was going to topple her, it would have happened three months ago.

She’ll keep her job, and Germany will continue to die.

Arguably, Germany, along with several other countries*, has already passed the point of no return.

She overcooked the schnitzel when she opened the doors of Germany to all comers. Germany is having indigestion.

notamemberofanyorganizedpolicital in reply to Comanche Voter. | June 17, 2018 at 11:55 pm

“Merkel’s sudden departure won’t end Germany’s woes. The country will be occupied for decades coping with fallout from her disastrous open borders policy.”

Nothing that MASSIVE deportation/repatriation couldn’t solve.

“She is expected to push for the so-called ‘European solution’ on migration.”

Yes, but they’ve tried to solve this before. I wonder if this is their final solution.