The Republicans are running their first Muslim congressional challenger and supporting mother-daughter candidates, while the Democrats are failing to support black women running in Alabama 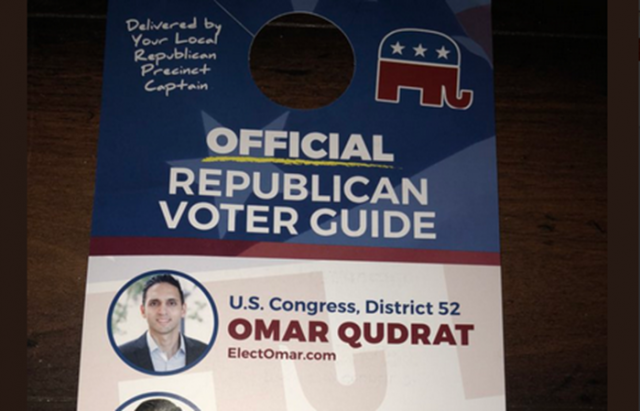 An Iowahawk tweet is frequently posted at Instapundit, which notes that the press decides which stories to cover . . . with a pillow, until they stop moving.

As the dust settles from the 2018 primary season and we head into the general election phase, I thought it might be fun to highlight a few items being smothered by our media related to their treasured progressive narratives.

The first MSM script element to cover is that “Republicans hate Muslims.”  Negating that assumption made by the progressive press corps is the story of the very dashing and savvy Omar Qudrat, a former Pentagon prosecutor and the son of immigrants from Afghanistan, who is running for Congress in my district in California.

You would think that news of an attractive, successful Muslim with that pedigree would be a media sensation.  Yet, not. 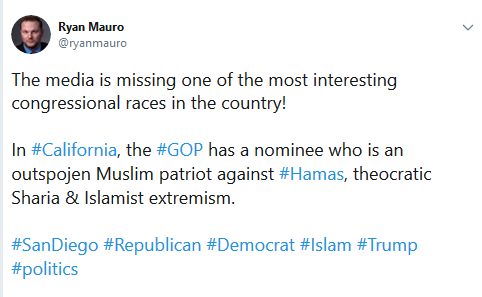 The media silence is due to the fact that Quadrat is running as the Republican challenger. Fortunately, I did find some information in a local news outlet.

Halfway through his 2-minute “Why I’m a Republican” remarks, he addressed what he called the “elephant in the room.”

He drew laughter after saying “It’s OK to say ‘radical Islamic terrorism.’ … If anyone gives you any problem, tell them you have a friend named Omar who says that it’s OK.”

But after referring to the fight against ISIS as “black-and-white stuff,” the former Defense Department prosecutor began describing “gray wars.”

Qudrat said organizations that portray themselves as advocacy or human rights groups are “weaponizing our Constitution against itself.” And he took a shot at the Washington-based Council on American-Islamic Relations, or CAIR, which calls itself America’s largest Islamic civil liberties group.

The associated video shows that Quadrat is a compelling candidate.

And his chances of winning are not half bad. The incumbent Scott Peters only received 56% of the vote in the last election cycle, so it’s not like is the Maxine Waters district in which the incumbent takes over 70% regularly.

Another story that the elite media would usually slobber over is a mother-daughter team running for their state’s legislature, especially as the 19-year old would attract the millennial vote.

However, beyond local media, we can’t expect much coverage. The ladies are Republicans….and the press narrative is that Republicans hate women.

According to the elder Drye, the duo is trying to “remedy” the sparse number of Republican women in the legislature “by leading by example.”

“If you look at the demographics of the [State] House, it is substantially aged and it is substantially male and a good portion of the folks are retired. It’s nice to have a representation of the rest of the state at the State House making laws for us,” said Margaret Drye, who’s also running as a Republican.

Finally, the press is keen to report how much the Democratic Party helps African Americans and women. Apparently, that help does not extend to some districts in which Democrat African American women would like to run for elective office.

The [Democratic Congressional Campaign Committee] DCCC has not endorsed any of the Democrats running in Alabama House races, even the contested Second District.

Black women on the ballot in statewide races are not even getting support from the Alabama Democratic Conference, the state’s largest black political organization. The conference ended up endorsing the two white women who are opposing Williams and Winfrey.

“We were told that it’s because she wouldn’t win in a ‘majority-white state,’” Adela Duncan, Winfrey’s communications director, told Refinery.

Essentially the message is that it is OK for African American women to vote-out evil Republican candidates and then vote in hand-picked Democratic ones that meet the party’s marketing criteria!

It’s a good thing that, as of this writing, I am still in my pajamas, sipping on a cup of coffee covering the news. Bloggers are continuing to do the reporting that the American media just won’t do.

This subject recalls the press thinking it funny when Obama’s Undersecretary of State Victoria Nuland was recorded on a phone conversation saying “F*uck Merkel.”

Muslim candidate against the Sharia? Color me skeptical. The objective of Islam is to conquer the world until Islam and the Muslims’ Allah is supreme. All Muslims are expected to work to this end. For a Muslim to do otherwise is to call into question whether that person is a Muslim.

But consider another possibility; namely that the person may be practicing taqiyya which a Muslim is Islamically permitted to do if the purpose of the lying to infidels is to advance Islam.

The existence a taqiyya, however, doesn’t preclude the possibility he is sincere.

Of course, a dash of skepticism is always appropriate with any politician’s claims.

There is far more variety inside Islam than you have been led to believe; but in the Middle East, once the radicals gained the upper hand politically they set about to harshly persecuting and exiling those sects that were much less militant, such as the Sufi. You are interpreting the Wahabi-Sunni version of Islam as being the only form, and it is not. Unfortunately for the world, the Iranian Shiite version of Islam is currently even more radical than the Wahhabi. They’re destined to destroy each other before it’s all over.

They’re destined to destroy each other

Western civilization has been waiting for that event for nearly fourteen centuries. It’s pretty clear that we can’t afford to sit back and let them do it at their leisure.

Iran (shiites) just admitted they helped the 9-11 attackers (sunnis) they both have the same koranic instructions to kill Jews and Christians.

The moderate Muslims are violating the core of Islam which is the word of Mohammad. They know this is true which is why they fail to destroy the true Muslims, the terrorists and Iran.

…the press decides which stories to cover . . . with a pillow, until they stop moving.

That made me laugh. As they say, it’s funny because there’s a lot of truth to it. And of course, it’s from Iowahawk, so yeah.

Who pays attention to the democrat media’s propaganda other than democrats and GOPe rats?

America loves Donald Trump. And that love keeps getting stronger.

No I do not “love” Trump. I don’t “love” any dang politician.

True. This “love” emotion is weird. Do many who “love” politicians ever have the same “love” for their boss, for example? The boss certainly has more impact on their daily lives.

I can say I “love” that there is a slow reversal of the bureaucratic domination of all things in life, but I hate that the “swamp” has not been drained by any measurable amount. So, once Trump disappears, even if not until 2024, it will quickly revert. If you’ve ever stopped rats from infesting an area, you know how amazingly fast they return.

Behold the future of the Republican Party:

If I were a Democrat (especially in CA) I’d be worried.

Abstract (out of mercy to all here, truncated and abridged)
“My research rejects traditional understandings of intersectionality as a necessarily progressive analytical framework, as well as recent discussions that suggest that intersectionality’s use for conservative ends is evidence of its theoretical underdevelopment.”

Does this suggest that there is hope for us all, particularly aspiring Omar Qudrat? The Regressive MSM are seized ideologues. It is a tortuous way to perish, actually witnessing the inconsequentiality of one’s own irrelevance.

I’m not buying this crap. Phuck all muzslimes.

Trying to outdo the D’rats at “identity politics” is probably not a winning strategy. The best it can do is make the R’s look like Dem Lites.

I don’t see a trace of trying to outdo Dems. To me it looks to be more passive. Not that many people are running for GOP positions by saying vote for my particular kind of “diversity”. Rather, the people who meet the “diverse” definition falsely foisted by progressives can say, “my diversity characteristic doesn’t matter. My beliefs do.”

Of course, too many elected class GOP defy the beliefs they ran on. And that has little to do with the diversity groups they fit into.

Don’t imagine that bending to the leftist view of society constitutes progress. The more of their preferences we adopt, the more like Democrats we are.