The Trumps donate to one of the couple’s designated charities as a wedding gift. 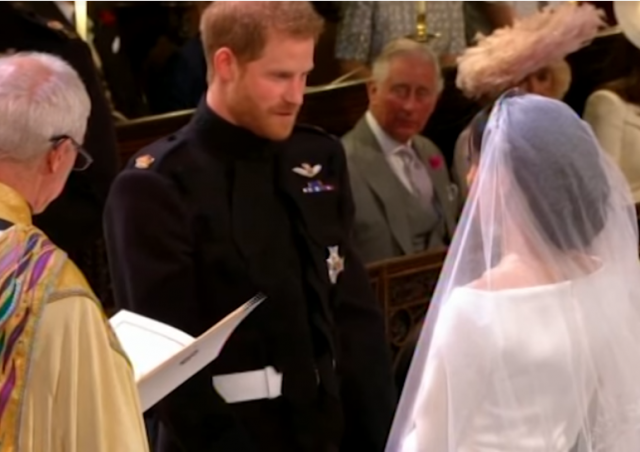 I woke up this morning to an onslaught of coverage of the Royal Wedding of Great Britain’s Prince Harry and American actress Meghan Markle, which apparently broke nearly every aspect of royal British tradition ever established since the Norman invasion of 1066.

…Today Meghan became the first mixed-race member of the royal family in an extraordinary journey for a girl born in LA to a white father and African-American mother who fought her way through the tough world of showbusiness to land a plum role in the TV series Suits.

Harry and Meghan’s big day couldn’t have been more different than royal weddings of the past, especially because the prince was visibly emotional throughout – and guests suggested it was the most diverse major event in the Queen’s 66-year reign.

The prince had looked tearful when he saw his bride for the first time, grabbing her hand telling her: ‘You look amazing – I missed you’ before tenderly lifting her veil.

The new Duke of Sussex also said ‘thank you, pa’ after his father Prince Charles walked the now Duchess of Sussex down the aisle of St George’s Chapel, Windsor, having stepped in at the last moment for Meghan’s father Thomas.

It is reported that Markle wanted this to be a “fusion” event, with a blending of American and British elements. To that end, she arranged for a US bishop to deliver a passionate address that appeared to amuse the royal invitees and a gospel choir filling the chapel with music from Ben E. King and Etta James.

We at Legal Insurrection wish the newlyweds much happiness. As the Windsor family has had more than its share of drama and tragedy, we hope this union is a shining success, Disney style.

Speaking of American and British unions, some of the TV commenters indicated that Markle might make a wonderful “ambassador” for the US, helping ease the tensions between the two nations that have been evident since President Donald Trump took office. Perhaps.

The Trumps graciously sent a wedding gift, despite the fact that political figures were kept off the guest list and Prince Harry is friends with Trump’s predecessor. The gift is in keeping with Trump’s tradition of giving generously to charity.

The White House says that the president and first lady will make a donation to one of the charities the Harry and Meghan recommended to their guests.

‘President Donald Trump and First Lady Melania Trump will be making a contribution to one of the 7 charities the royal couple has designated in lieu of gifts,’ Lindsay Walters, a spokeswoman for the White House, told DailyMail.com on Wednesday.

The couple has asked guests and well-wishers donate to charity close to their hearts rather than buying a gift when they tie the knot on May 19.

Hopefully, the Duke and Duchess of Sussex can help chip away at some of the frost between the leaders of the two nations during Trump’s “working visit” this July.

The visit will include a meeting between Trump and May, who have clashed in the past over issues including trade and terrorism.

…Both governments have tried to schedule a presidential visit in the past, but plans have been scrapped after flare-ups between the two leaders.

The tensions have impeded May’s efforts to broker a new trade agreement with the U.S., which will be necessary once Great Britain leaves the European Union.

I will simply note that Markle’s wedding guest list included Hollywood celebrities and bicoastal glitterati. I hope she remembers that there is more to America than the two coasts and their progressive culture, and finds it within herself to be gracious to the elected leader of her home country, as he represents the heartland of a great nation as well.

I’m disappointed…….disappointed that President Trump didn’t send them an Ipod loaded with all of Obama’s speeches!!!

What’s the latest on this I wonder?

Winston Churchill was of mixed parentage, a British Lord and an American mother and that didn’t turn out too badly for the Brits. And the world.
We shall see. At least the British Tommies didn’t have to learn to ‘goose step’ after 1945.
From what little I saw of the ceremonies, it had too many social justice implications, having the Euroweenie Prince Charles rather than her father walk her down the aisle was one.

These two people have to deal with issues most people never face. Now they have each other, officially, and I hope it helps. Cin-Cin.

Triumph of hope (in the face of evidence?) and all that. Nice.

My, my. These things do bring out the most extraordinary array of hats.

Sorry, but for me, British royalty events = *yawn*. Being forcefed 24/7 media on Lady Di didn’t help.

notamemberofanyorganizedpolicital in reply to bobinreverse. | May 19, 2018 at 5:20 pm

I read there’s no prenup. If true, it might be over quicker than you imagined.

Liked her at first, but after reading how she left her prior husband, she started to smell bad.

The fact she’s a lot older than Harry (merely 30) is not good.

Most all actresses are narcissistic nuts, and the good ones are the worst.

“They’re affectionate toward each other in public, which might not bode well for their future.

“Markle and Prince Harry were much more affectionate during their engagement interview than both Prince William and Kate Middleton and Prince Charles and Princess Diana. They held hands, giggled, and gazed lovingly into each other’s eyes. By contrast, the other two couples barely touched or looked at each other.

“One study, published in the journal Interpersonal Relations and Group Processes in 2001, found that this type of behavior tends to predict the dissolution of the relationship. The authors write: “As newlyweds, the couples who divorced after 7 or more years were almost giddily affectionate, displaying about one third more affection than did spouses who were later happily married.”

ROTFLMFAO! the bride is wearing white…

from all accounts,she’s had more rubber burned in her than the first 150 yards of the runways at LAX. 😎

The GOPe will not approve and they’ll get the vapors too!

The whole thing is weird, this wedding. The girl is strange. The circumstances are bizarre. Perfect royal reflection of our age. Or I guess it would be better if the bride was a transgender muslim who wears a burkha.

“Or I guess it would be better if the bride was a transgender muslim who wears a burkha….”

We already had that. Though mooooochelle didn’t wear a burkha.

Prince Harry has often expressed his love of Obama and his progressive ways. So, I am pretty sure Meghan will feel the same way. If rumors are true, Harry wanted to invite the Obamas, but the Royal family nixed that as it would be a direct snub to a sitting President, and they can’t make such a blatant political statement, or social faux pas.

The likelihood that she will be a great ambassador for the U.S. is very small, if not nil. If her family’s antics got to her as much as it seems, she has decided run from them (except Mom, it seems), and probably to leave the U.S. behind altogether and become as pro-British and anti-America as possible.

That said, she was a lovely bride, and the wedding was lovely from what little I saw. They seem genuinely to love each other, and to be happy. More than many can say in the royal family, apparently, if you look at what happened to Princess Anne (the Queen’s sister) and others……

I wish the Duke and Duchess of Sussex much happiness and joy! But doubt they will be friendly with this administration in the U.S.

I misread this as “Trump donates the charity to the bride”, ie. her wedding registry listed her preferred charity for guest to donate to, so Trump just bought the charity outright and gifted it to her. Like Bruce Wayne would do, lol.

… which apparently broke nearly every aspect of royal British tradition ever established since the Norman invasion of 1066.

Well, marrying recycled American divorcées is a bit of a tradition.

Wallis Warfield Simpson is turning over in her grave!

Sorry, but I think Ms. Markle played poor, screwed up Harry perfectly. Thank goodness, he’s only seventh in line to the throne.

It’s about as idiotic as it gets, if you assume Harry wants or needs to produce an actual heir. Since his brother has done his proper duty this is just a farce. Any man marrying a woman of her age and history is asking for trouble. Apparently his judgement is as poor as his admiration for Obama would suggest.

It won’t be complete until they get TJ Miller to play Harry in the TV movie.

As someone wiser than me summed it up: Harry, 8th in line for the Crown; Megan, 6th in line in “Suits.” Who cares?