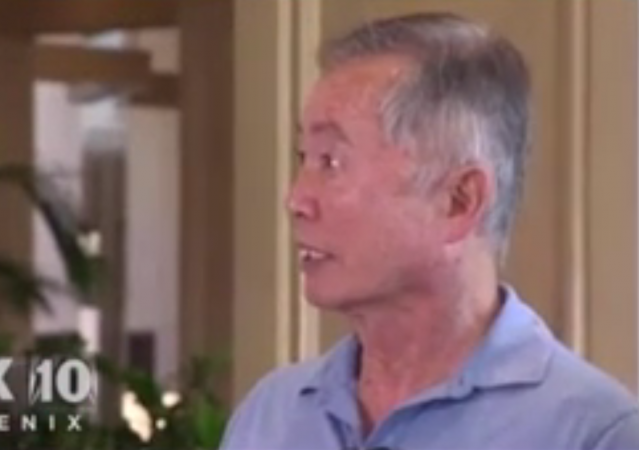 Back in November, we covered the male model who accused Star Trek‘s George Takei of sexual assault.   The male model, Scott Brunton, has reportedly now changed his story.

George Takei, best known for his role in “Star Trek,” was accused Friday of sexual assault by a former actor and model, according to The Hollywood Reporter.

Scott R. Brunton said the incident occurred in 1981 when he was beginning his career in Hollywood. He said he met Takei, who was 43 or 44 years old then, at a bar and the pair reportedly exchanged numbers and talked on occasion.

. . . .  Following a night out, the duo reportedly went back to Takei’s apartment for drinks. During the second round, Brunton said he began “feeling very disoriented and dizzy” and thought he “was going to pass out,” he told The Hollywood Reporter.

Brunton claimed he “passed out” in a beanbag chair in Takei’s apartment and when he regained consciousness, he allegedly found himself in a compromising position.

“The next thing I remember I was coming to and he had my pants down around my ankles and he was groping my crotch and trying to get my underwear off and feeling me up at the same time, trying to get his hands down my underwear,” Brunton told The Hollywood Reporter. “I came to and said, ‘What are you doing?!’ I said, ‘I don’t want to do this.’”

Brunton claimed he left the apartment despite Takei telling him “to relax” and “get comfortable.”

The Observer‘s Shane Snow said that following this allegation, he waited for the barrage of accusers to follow, and when none came, he became curious and decided to follow up.

Back in November, while Hollywood in the midst of an ever-growing series of accusations and allegations that began with twin bombshell reports against Harvey Weinstein, former model Scott Brunton offered his own tale to The Hollywood Reporter, saying that he had been drugged and groped by Star Trek actor and social media personality George Takei. Six months later, Brunton has walked back his story, saying he doesn‘t actually recall a few key moments that he originally claimed had happened.

In a new piece from the Observer, published Thursday, Brunton acknowledged a few inconsistencies in his story. He said that he does not actually recall Takei touching his genitals, which would have turned the encounter into one involving criminal sexual assault, and he also doesn’t recall a coffee meeting the two had years later, which Takei also said he had no memory of. Toxicologists who have examined the story say that Brunton could not have gotten up and left so immediately if he had been drugged, as the only sort of drugs that were available at the time (the mid-’80s) would have knocked someone out for hours. Brunton also noted that he wasn‘t traumatized by what happened, and that instead it had become “a great party story.”

For his part, Takei is being exceedingly gracious.

As many of you know, this has been a very difficult period for myself and my husband Brad as we have dealt with the impact of these accusations, but we are happy to see that this nightmare is finally drawing to a close. https://t.co/nHCjnebCBO

It is in that spirit that I want folks to know, despite what he has put us through, I do not bear Mr. Brunton any ill will, and I wish him peace.

It’s a consequence of feminist demands that any sexual assault allegation, no matter how old, must be true therefore a statute of limitations on accusing somebody of such a crime is unjust.

wanna know who is NEVER gonna be accused of sexual assault, harassment, whatever?

Mike Pence, that’s who. There’s a reason for rules about who you associate with. And that’s one of the big reasons the left hates him so much.

He is more likely to be an object of ridicule than hatred.

Um, no. That is pure, weapons-grade hatred. When you wallow in the stuff it can be hard to recognize.

To borrow from my childhood: It takes one to know one.

So you don’t know hateful bigots when you see them. You’ve never called someone that and have no idea who they might be, or even if any really exist. Good to know.

They have to pay a lot of dues to their slave owners.

Fuzzy Slippers in reply to notamemberofanyorganizedpolicital. | May 27, 2018 at 8:55 pm

I remember thinking at the time that the story broke, George may have done this sort of thing in the past, and he didn’t exactly remember this particular time because of the others.

What goes around, comes around. Give him the “Trump media treatment:” screw him.

Besides, where there’s smoke, there’s fire – in particular with males who vigorously back leftist feminist agendas. (That’s the deal: abuse who you want, but back our political cause.)

One liberal lying about another liberal. Shocking.

I don’t think an allegation that that little gay runt could assault ANYBODY is plausible.

come on it’s in the NAMBLA handbook it’s ok to kiss and make up..

But what if the Mirror Universe Takei used the Guardian of Forever to come back in time with advanced date rape drugs from the future?

Rustyshamrock beat me to it

Hmmm … that thing about the beanbag chair does lend a bit of authentic ’80’s verisimilitude to the tale.

The amount of pity I feel for Takei’s travails can fit in a thimble with room left over.

I did meet Mr. Takei many years ago – before his public announcement on his orientation. He was in the area discussing the WWII internment camps.
I found him to be cordial and intelligent. It was a very nice visit.
That being said, I do not believe Mr. Takei sees the hypocrisy of supporting the political party that him personally in such a place.
Also, I do not care about his sexual orientation. I just wish he would stop beating everyone over the head with it.

“I do not care about his sexual orientation. I just wish he would stop beating everyone over the head with it….”

What else would he have to talk about?

It’s gotten worse. I ditched Facebook over a year ago, but back then his page was a daily incitement to a cult of anti-christian bigots. I actually asked him to remember the intolerance he had experienced and then look at the Bake Me A Cake mob he was creating online. He had no comment.

Takei is a bigot, a hypocrite and a coward.

If he was falsely accused, which seems to be the case, then the person who made the false accusation should face the same punishment that Takei would have faced if found guilty.

A: Probably. I’m not too concerned about it. If the accusation was real and we’re just seeing a payoff now, nothing will happen. Same if it was just a 36 year old memory failure/confusion. (Because just how can *anybody* defend themselves against a charge that old)

One would think that if this was a fabricated charge, that Mr. Takei would then learn just what it is like to be ambushed by a lie and perhaps that his tendency to fling around unsubstantiated accusations might change.

Yeah, I don’t believe so either. So nothing’s going to change.

notamemberofanyorganizedpolicital in reply to georgfelis. | May 28, 2018 at 12:58 pm

You are right on that.

Why didn’t he sue for libel and slander?

georgfelis in reply to notamemberofanyorganizedpolicital. | May 28, 2018 at 1:21 pm

Well, Takei may be a Will Wheaton level jerk, but if he is indeed innocent, he should be left alone on this. I don’t like anybody being subject to false witness, whatever their faults.