U.S. Unemployment Rate Below 4% for the First Time Since 2000

U.S. Unemployment Rate Below 4% for the First Time Since 2000

Wage growth has gone up little, though. 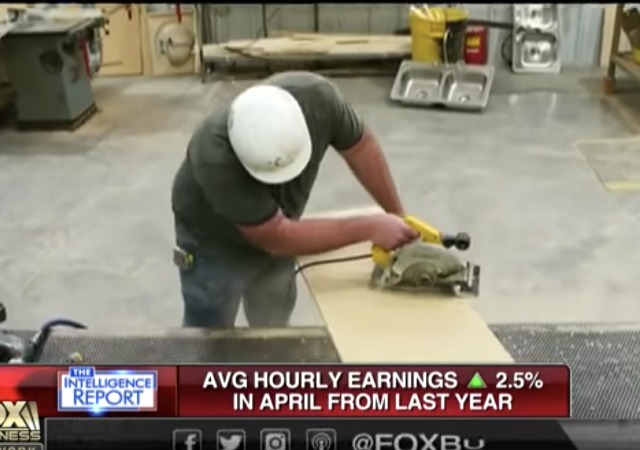 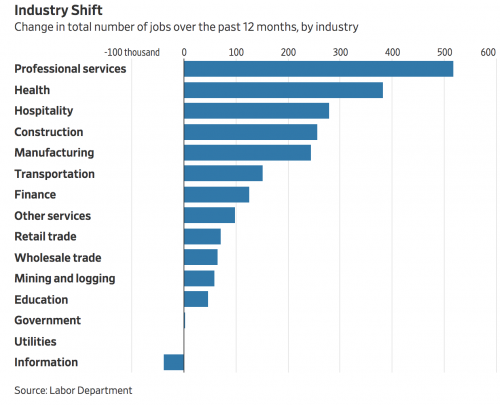 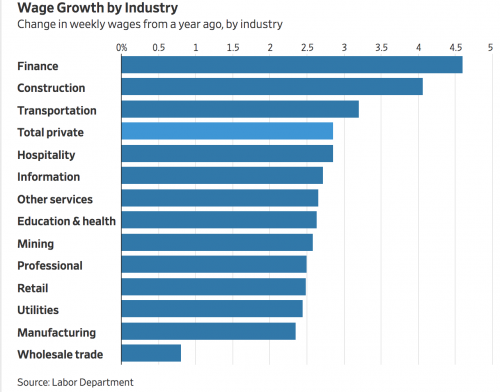 Factory jobs went up in April as “[M]anufacturing firms added 24,000 workers to payrolls.” This means the country has “added 245,000 manufacturing jobs over the last year.” Health care added 24,000 jobs and mining added 8,000 jobs in April.

The results may also reinforce forecasts for a rebound in economic growth this quarter after a slowdown in the first three months of the year, with the labor market supporting gains in consumer spending that may be further fueled by tax cuts. Companies in industries from services to manufacturing are hungry for workers, indicating hiring is likely to stay solid.

“Overall, it’s a good report,” said Michael Feroli, chief U.S. economist at JPMorgan Chase & Co. “Slack is getting absorbed” but “the process of that translating into faster wages has been slow. Wages are clearly the one disappointing part of the report.”

The Wall Street Journal reported that economists believe that the unemployment rate will likely continue to fall:

The fall was driven in part by the decline in the labor force participation rate, a which some economists worry could signal that people are feeling less optimistic about job prospects. Still, economists expect the unemployment rate will decline further in the months ahead–with the Fed forecasting a 3.6% rate next year–as the labor market continues to tighten.

Despite all this, wage growth has grown little:

Average hourly earnings rose four cents in April to $26.84, a 0.15% increase from the prior month. On a year-over-year basis, wages grew 2.6%, below the 2.7% rate economists had forecast.

The sluggish pace of wage growth should temper fears that an increasingly tight labor market–with the unemployment rate falling to 3.9% in April–is putting too much upward pressure on inflation.

Scott Brown, chief economist for Raymond James, told The Wall Street Journal that it “is a bit of a puzzle” trying to figure out the “disconnect between wages and unemployment.” WSJ continued:

Mr. Brown said several factors are likely keeping a lid on wage growth, from a decline in unions over the last several decades to some employers opting to offer perks such as signing bonuses rather than raise workers’ annual compensation.

Others suggested the proliferation of so-called gig economy jobs through services like car-hailing app Uber and house-rental service Airbnb have also played a factor.

“I don’t think inflation is really going to be much of a problem from here,” Brown added.

Notice the change in trend with the new administration — in 2009.

U3 is down .5 from 4/17 for the U3 and down .8 for the U6. The U3 isn’t phony, it’s just not the whole story, and was unsuited as a proxy for economic health during the Obama administration because of discouraged workers.
Participation rate is a better proxy, though imperfect. Baby boomers aging off didn’t help Obama there, but the worst part was nest clingers. They put half a generation behind the curve of career progression and earnings.

The u-6 shows the same trend.

Immolate: They put half a generation behind the curve of career progression and earnings.

Part of that is due to extended education.

As galling as it might be to some of us, the many Zachriels are right. The unemployment numbers are just as inflated and ill-tallied as those under Obama (and under Bush before him, and Clinton before him). Each new president adds new and exciting categories for calculating jobs numbers, and all are geared to best-serving the current president. Part-time jobs are counted, seasonal work is counted (Santa at Christmas? Big fat job to be tallied in even if Santa spends the rest of the year on welfare).

One of my favorites that didn’t include employment numbers but was just a typical bit of Obama smoke and mirrors was when I was declared to have a “green” job . . . because I work from home. Seriously, that was a thing. I didn’t have to drive my car to get to work, so I had a “green job.” I think that was before Van Jones, the self-proclaimed communist and Obama “Green Czar” of “cash for clunkers” fame, left the WH under cover of night.

Bottom line, though, I can’t cheer these numbers when they are just as faulty as those trumpeted, equally inaccurately, by Obama.

Do a search for “real unemployment” to see the myriad problems with the current metric.

That said, Trump’s fake jobs numbers are indeed better than Obama’s (and as far as I can tell, Trump is using the same flawed and crazy formula Obama was using).

Because they don’t count those who stop looking after something ridiculous like 6 weeks.

NEW: Un-Employment Rate drops to 3.9%, lowest since 1973…. got this on twitter
Just saying

Who cares? Tell us more about Stormy Daniels, a topic that affects everyone’s daily well being.

What would the employment numbers be if not for the unilateral, authoritioan cronycrapitalim of Duh Donald’s (and Bernie Sanders’) tariffs?

You mean the tariffs businesses are moving back here to avoid.

No business can avoid the bad effects of tariffs, which are universally bad, though in different ways, even if you are the special interest being “protected”.

All any business can do is try to mitigate the market distortions caused by BIG GOVERNMENT.

Consumers can’t even do that. They’re just stuck with a new tax dropped on them arbitrarily from an authoritarian.

No question from an economic illiterate is sound.

It is difficult to discuss matters with you when you resort to your immature and ignorant self. I usually neither rate you one way or another here because it is not worth it. But you really should remove yourself to another forum that appreciates your sharp wit and depth of knowledge.

Or, “I got nutin’, and curse you for making my head hurt”.

Since this was entirely due to people dropping off the official, ‘unemployment index’ and not job growth there is no reason wages should go up.

The numbers are about as real and relevant as inflation or the number of illegals here in the US.