U. S. and China Put Trade War “On Hold,” Including Imposition Of Tariffs

U. S. and China Put Trade War “On Hold,” Including Imposition Of Tariffs

“President Trump ‘insisted’ the trade deficit be lowered and details would be hashed out ‘down the road’.” 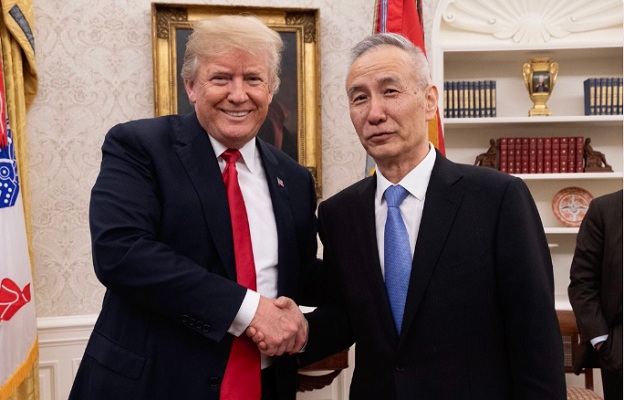 We’ve been covering the Trump administration’s trade talks with China, and now both nations have reportedly agreed to halt the trade war, including the imposition of tariffs, until a deal has been reached.

Washington and Beijing have agreed to abandon any trade war and back off from imposing tariffs on each other, Chinese state media reported Sunday.

The announcement came after high-level talks in the US capital and followed months of tensions over what President Donald Trump has blasted as an unfair commercial relationship between the two economic giants.

Vice-Premier Liu He, who led Chinese negotiators in Washington said: “The two sides reached a consensus, will not fight a trade war, and will stop increasing tariffs on each other,” state-run news agency Xinhua reported Sunday.

Liu called the agreement a “necessity”, but added: “At the same time it must be realised that unfreezing the ice cannot be done in a day, solving the structural problems of the economic and trade relations between the two countries will take time.”

JUST IN: In joint statement with the US, China says it will “significantly increase purchases of United States goods and services” to “help support growth and employment in the United States.”https://t.co/vpyWbVRRy9 pic.twitter.com/OZ0CU8vqPJ

Treasury Secretary Steven Mnuchin said the Trump administration won’t apply tariffs on Chinese imports to the U.S. while the two countries hammer out details of a deal to reduce the yawning U.S. merchandise trade deficit with China.

“We’re putting the trade war on hold,” Mr. Mnuchin said in an interview on Fox News Sunday, while the two countries “try to execute the framework” of a deal to reduce China’s $375 billion annual trade surplus with the U.S.

During bilateral trade talks held in Washington late last week, the U.S. had demanded China reduce its trade advantage by $200 billion or more. China came to the talks ready to step up purchases of U.S. goods, but refused to agree to a specific dollar amount.

Appearing Sunday on Face the Nation, National Economic Council Director Larry Kudlow said that the meetings have been “very positive” and that the administration is “making terrific progress.”

National Economic Council Director Larry Kudlow says the White House has made a “lot of progress” toward avoiding a trade war with China as negotiations over trade between the two countries continue.

“We want China to open up markets, lower tariffs, lower non-tariff barriers, give us a chance. We also want China, however, to change their behavior with respect to technology transfers and also the theft of intellectual property rights. Now, are we going to get everything? I don’t know, but I will say this: We’re making terrific progress and I think the meetings here in Washington were very positive,” Kudlow told CBS News’ “Face the Nation” on Sunday.

In April, the Trump administration threatened $150 billion in tariffs on Chinese imports, which China countered with a tariff threat of its own, targeting U.S. farmers in particular. Kudlow said President Trump “insisted” the trade deficit be lowered and details would be hashed out “down the road.”

“Our view is China must open up. They must become fair traders. They have not been. The rest of the world knows they have not been and China has got to stop the theft of intellectual property and the forced transfer of technology. Those are our family jewels and we can make deals on this. I believe we can make arrangements. That has not yet been completed. But the early going — I mean, tons of energy coming, tons of agriculture, tons more manufacturing,” Kudlow said.

Well, rags, what say you? Another win for our President? The Chinese have shown a more flexible attitude after tough talk and action, just like they obviously are pressuring the norks on their suicidal nuke program.

How much MAGA can you take before your head explodes, or before you admit you and your anti-American attitude are forced to change?

Another rags meltdown in…3…2…1

Luv ya rags, you rascal you.

Imagine: we could have elected this slug:

Hillary Clinton to get Harvard medal for ‘transformative impact on society’
http://www.foxnews.com/politics/2018/05/20/hillary-clinton-to-get-harvard-medal-for-transformative-impact-on-society.html

Rags would post a great retort, show you guys up, but it would only get “censored”.

Lol. Talk about delusions of grandeur.

“In a world conquered by fascist Trumpkins, only one man has the courage to speak truth to power. A man of integrity, a man of principle. Waging his revolution on an obscure website, suffering the lies and censorship of the 4th Reich while they hide his meds. The battle begins…”

Fen, you have dropped a genius-level, snark bomb. I regret that I have only one thumb-up to hand you.

Well the Price of Food is going up folks. That is the obvious thing for the Chinese to buy.

Have you noticed how the price of Pecans has jumped in the last few years? China is now buying 30% of the entire US crop. And, the Chinese don’t even grow pecans. They just like nuts.

Environmental, labor, and monetary arbitrage. The tariffs are still in place.

I have to admire Trump for 1 think. When loses, backs off or accomplishes nothing, he simply tweets out that he won a great victory.

Despite the fevered imaginatings expressed here, NK, Iran and China do not seem to be quaking in their boots.

An edit “Trump for 1 thing. When he loses”

This is fairly standard back and forth as two huge economies barter a deal. Too early to call success or failure.

Except that Trump has already blinked twice. Once on ZTE and now on the tariffs. In return he has gotten nothing but a vague promise about the Chinese buying more. Nada, nothing. He sure is a great negotiator.

I just hope Trump tells the Norks they can’t have satellites passing over the U.S.A. twice a day, unless we can examine them to be sure they don’t carry EMP devices.

So what happens when 3000 New Yorkers get incinerated because CIA and FBI were too busy playing Game of Thrones?