Contrary to rumors, Kathy Griffin was not the art teacher. 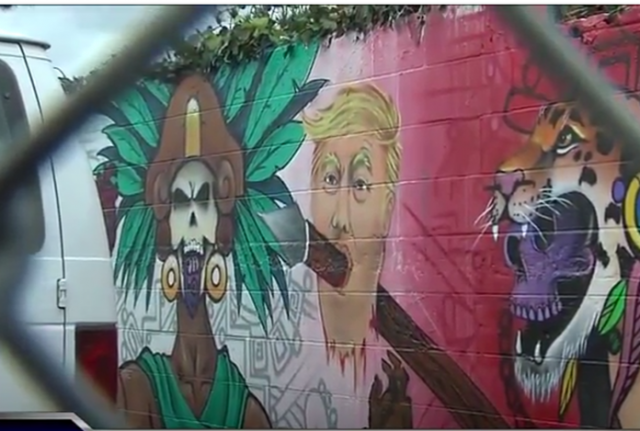 A new mural at a California charter school in a southern suburb of San Diego has quickly become notorious.

The artist depicted President Trump’s head on a spear.

Shasha Andrade, one of three people who worked on the piece, shared the full image of the mural across Facebook and Instagram when the painting was covered up.

Andrade wrote on Facebook that the group agreed to change the graphic mural because of threats made to the school.

“We were just going to adjust the mural but when things got out of control and the school started receiving threats and putting the students at risk we decided to change it completely,” she wrote on Sunday.

School director Tommy Ramirez told KFMB the mural was a part of “Battlegroundz,” an annual event highlighting street murals as an urban art to raise money for scholarships for seniors. The fundraiser was on April 28.

A sampling of comments shows that the piece was not well received by area residents.

Contrary to rumors, famous Trump-inspired artist Kathy Griffin was not the art teacher.

In other San Diego school news, a local high school student was charged Monday with running a smuggling ring that brought both illegal immigrants and drugs such as methamphetamine and the dangerous synthetic opioid fentanyl across the border.

Phillip Junior Webb was nabbed last week when he drove across the border with two illegal immigrants hiding in the trunk of his car, investigators said in court papers.

Authorities had apparently been keeping tabs on him for awhile, though, with the court documents showing they’d come across five juveniles over the last year who were caught smuggling drugs strapped on their bodies. Each of them said they were recruited by Mr. Webb, 18, who had been a classmate and who paid them up to $500 for each smuggling attempt.

One of the juveniles reported he was successful perhaps 20 times, collecting thousands of dollars in cash during that time frame, before he was finally caught.

“We are seeing a very troubling trend and we want to warn parents and high schoolers,” said U.S. Attorney Adam L. Braverman, who announced the charges Monday. “Our youth are being recruited by drug cartels to smuggle dangerous drugs across the border. We are going after the recruiters who exploit these kids, but the kids also need to know that they are gambling with their lives when they do this.”

Attorney General Jeff Sessions was recently at U.S.-Mexico border in San Diego, a story that may have been missed in all the other news that has been breaking recently. He announced a “zero tolerance policy” for illegal immigrants. In addition to National Guard troops, thirty-five federal prosecutors and 18 immigration judges have been re-directed to the border to handle immigration cases.

“We aren’t making any laws up. We are enforcing the laws enacted by Congress. These are laws on the books, laws that we all took an oath to enforce,” he said.

Hopefully, border security will be tightened before other area high school students decide to become drug kingpins as part of their extracurricular activities.

However, it gives the Chula Vista student artist another potential subject for a future mural.

But don’t draw picture of a gun, you’ll be interrogated and arrested, removed from your home while social services investigates your parents for promoting violence

Not if help by a Latino. You will be celebrated.

Have ICE drop into the school and expel any illegals.

They’re Pro-Choice. Abortion is a social keystone of their religious/moral philosophy.

Freaks ought to start trying to look normal. They’re marginalizing themselves and they’re vastly outnumbered.

If an apolitical mural depicting native Americans as bloody, human-sacrificing, butchers who tore the hearts out of their victims, the artist would be excoriated as a racist and the artwork deemed offensive. It would have been covered up within 24 hours of someone taking note of it, and gone in 48.

Aztec warrior, eh? I’d be willing to be the Chicano population of that school is very high, and most of them illegals. This is the sort of stuff you see in the murals L.A. County started allowing on the outside walls of welfare housing.

SCOTUS got it DEAD WRONG when they ruled we have to [pay to] educate illegals. That still frosts my ass after many decades. We need Eisenhower reincarnated to enact Operation Wetback II.

I agree with you. The reason I heard for allowing murals was it stopped the outrageous amount of graffiti done via spray can. Some of the original murals were stunningly well done, and not at all confrontational. Then the MEChA and Aztlan crowd took over, and the county wouldn’t put a stop to it.

L.A. was always a city with a significant population of people with Mexican heritage. They were for the most part proud people, hard workers, and most spoke at least passable English, and wanted to get along. Much of that is long gone. I’m a native Angelino and there is much I miss. But, you couldn’t get me back there for anything, even if I could afford it. What I see now is so sad.

It is Azteca/Aztlan school that rejects the USA and believes we are occupying…..a Spanish Crown Colony? That is right, not Mexico per se. A colony that voted overwhelming to join the USA rather than Mexico.

How about cutting off welfare for everyone attending the school? That would be quite entertaining.

Clearly someone imagined a spear through Trump’s head. So here’s the question. Who chucked the spear?

Who said it was a chuck?

What, you think it was bowled?!

I’m still wondering who the hell is Chuck and how did he get involved?

Confusing a verb with a noun.

The dimensions and placement of the ‘spear’ seems to be more phallic than realistic. I don’t think this is unintentional.

Other than noting the hostility, we can do nothing about political expressions in hostile foreign countries like the Peoples Democrat Republic of Alta California. We can, however, cease sending them any more monetary aid in any form from the Federal government.

A tarp? The principal in our high school would have been out there in an hour with a roller and a can of house paint, and four hours later, putting on a second coat, with three-day suspensions for any student who so much as raised their voice.

The artist is going to ‘modify’ the painting? Sorry, but this is your last chance. Do it over right or it gets painted over for good.

Principle didn’t have a problem with it until after there was a “national outcry”.

Bet the ‘artist’ can get a ‘judge’ to prevent it being painted over too – violation of some invented ‘right’.

The academic skills of the entire student body could not equal that of an average student in 1960. Pitiful scores. They do not even speak English.

Exactly this. And the comment applies to every one of the these “look what the nutty public schools are doing now” stories. I would be far more inclined to give a rip about what the public school teachers/administrators and/or Little Indoctrinated Johnny and Sally thought if there were evidence that the public schools were actually decently educating our children. By and large, however, our public school system is failing – badly. The data from the school in this piece is nothing short of appalling:

And this is why I homeschool.

I’ll take ‘Things that the media would scream demonstrated how racist Republicans were if done to Obama’ for $1000, Alex.

Scream, hell! They would have burned the school and half the damned city.

And you know the Never Trumpers are Loving On it!

How about a mural of obama getting treatment from Vlad The Impaler, and let’s find out?

The entire mural is offensive as it implies that black charter school students are culturally the same as jungle-dwelling head hunters.

You know, if someone could develop a clear coat for brick and concrete that once it’s set on that all it would take to remove and paint is a sponge and a bucket of water, that inventor could probably make billions selling his product to cities the world over.

“Remove any paint.” Let that be a reminder to read your comments before you post.

I doubt that any of the so called art that was to be painted on the walls were not submitted to the board for approval prior to being rendered. If the artists didn’t then there is a huge problem with the school board. So, it had to have had some approval attached to it.

The picture also featured the warrior holding a heart.

I wouldn’t like it if it were Obama featured like that, not that the school board would have ever approved that anyway, but it is not right to depict any official of our government in such a violent fashion. That art is a call to violence against the President.

The one turkey being interviewed shows he is a low information voters saying that Trump called Mexicans rapists, which is not what he said. This is the unhinged media’s fault, always spinning things to do with Trump in a negative light no matter what. Over 90% of reports on him and his actions are negative.

At least there were some in this report above who were shocked and not comfortable at all with what was depicted. There is some hope of sanity… then you have those who “wished I drawed that” types who clearly are only driven by the hatred of the media and leftist politicians.

Chula Vista is a pit. Drug gangs, crime, and meters from the Mexican border. No surprise that this would be allowed there.