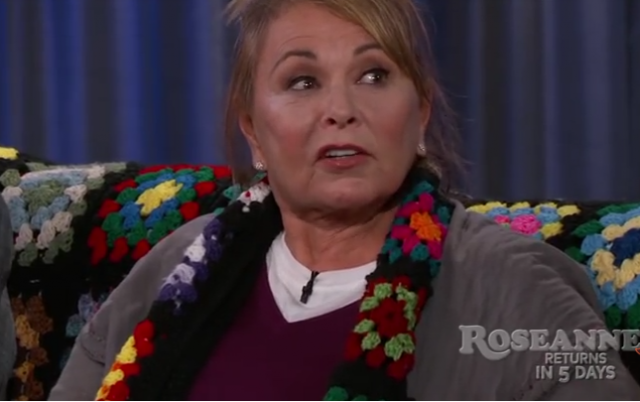 One of the best parts of the Trump era is watching how internet and Hollywood cultures react when a big megaphone wielding celebrity steps outside of progressive boundaries.

Roseanne Barr has always been that person, to a certain extent, the difference is that now, she’s outside of the Hollywood mainstream and seems to enjoy needling everyone else who, in her view, has shifted leftward while she’s stayed put.

Friday, Roseanne poked fun at the media and everyone following the Stormy Daniels story with baited breath:

follow @StormyDaniels so u can stay informed of what's important in our country! thanks!

The reactions were pretty great:

It’s funny but we never got to meet Monica Lewinski’s lawyer. How come that bastard wasn’t on CNN non-stop for a year?

Actually I do follow her and like her. She's saving this country, which is more than anyone can say of you, Roseanne.

The left has full blown TDS, and I thought it was insane when Bush beat Gore and the left had BDS… it’s like they collectively say “hold my beer” and proceeded from that point to out do each other’s insanity.

I now hesitate to wonder how much further down the path of psychosis they will travel, as they seem to take it as a challenge instead of a criticism.

So now we should just ignore his BS, lies, fraud, cheating, instability, greed, bragging; not to mention his destructive and vindictive policies. Let it go. Let’s just move on!

Actually it seems that ODS motivated certain people to get off their a$$es and help elect Trump. Now TDS is going to motivate liberals, progressives and moderates to TAKE OUR COUNTRY BACK AND NOT LET GO OR GET COMPLAISANT.

We have more people and more money. We need that because the Constitution gave extra voting power to states that, not coincidentally, trend red. That’s because the original sin of our great nation was slavery.

Half of Trump’s crowd will soon be disillusioned when his incoherent policies become so obviously ineffective that they can’t be ignored. That will leave the bigoted and the h8trs.

As for Rosanne: I didn’t watch her the 1st time because I found her irritating and full of it. It will be no hardship to not watch this time.

oldschooltwentysix in reply to YellowGrifterInChief. | May 4, 2018 at 9:39 pm

Birthers were not moderators of network talk shows and prominent political leaders. The comparison falls short.

That you even equate the scope borders the idiotic or intentional.

And? Your point? That Trump led almost 100% of the media to claim Obama was illegitimate and should be removed? How foolish!

Even you can’t take yourself seriously. The widespread venom for Trump compares to widespread adulation for Obama.

Yellow– are you really Chelsea Clinton, under a false name?
Your mama, Hilary, was the first opposition birther.
Heck, President Barack Hussein Obama was the first birther. Didn’t one of his book biographies list him as African born?

What really happened to the Hawaiian officials who could have spilled the beans? Why does he release so little of his background? Where are the documents of his denouncing his Indonesian citizenship?

The “birther” movement was founded by Obama’s publicist, Acton and Dystel in the promotions for His 1991 book Dreams From My Father. His publicist said he was born in Kenya up until 2 months after he announced his run for POTUS. http://www.dailymail.co.uk/news/article-2146622/Barack-Obama-Kenyan-born-2007-according-literary-agency–months-announcing-bid-U-S-presidency.html

I don’t care wither way. But, at least get it straight.

YIGC, you are so overtly obnoxious and ill-informed that you’re rather comical. I love reading your posts because they read like a satire of leftist thought. The problem, of course, is that you may really believe the drivel you spew.

Here’s a thought, would Trump have been possible if the left weren’t acting like the elite overloards of the unwashed masses? What happens when you illogically decide that a coalition of minorities are the winning ticket. (Hint: whites are still in the majority at over 65%).

So now we should just ignore his BS, lies, fraud, cheating, instability, greed, bragging; not to mention his destructive and vindictive policies. Let it go. Let’s just move on!

Actually, this is a valid point. Trump is a pretty horrendous human being. Here’s the thing, though, he is our duly-elected president, warts and all. America knew what they were getting, and preferred that to the only other option. This says more about the failure of regressive policies (both left and right) than it ever will about Trump.

Shhhh, I want to tell you a secret: a LOT of Trump supporters dislike him as a person. Don’t tell anyone, though, because it’s funny to watch Democrats keep hammering on things that mean less than zero to Trump supporters who knew what they were getting . . . and still thought he’d be better than Hillary. That it’s thus far turned out that he’s better than a weak-whiny Jeb! or Kasich might have been, we’re in high cotton on the Trump train.

Actually it seems that ODS motivated certain people to get off their a$$es and help elect Trump. Now TDS is going to motivate liberals, progressives and moderates to TAKE OUR COUNTRY BACK AND NOT LET GO OR GET COMPLAISANT.

Except that’s ten kinds of cray-cray. I truly believed that Obama would lose in 2012; we hated him and were so so motivated. If really really really wanting, super bad and totally intense wanting was all it took, Obama would have lost his second term. The facts: most people in this country couldn’t tell you the name of Speaker of the House (heck, a good third can’t even name the Vice President . . . and to this day couldn’t tell you the name of Hillary’s running mate–my guess, you are Googling that now, right?). That ignorance and lack of civic engagement hits the entire spectrum: left, right, and in between. You’re counting on an outraged teensy-tiny group of crazy “resistance” loons (slightly less than 10% of the population).

We have more people and more money. We need that because the Constitution gave extra voting power to states that, not coincidentally, trend red. That’s because the original sin of our great nation was slavery.

What the hell are you talking about? Have you ever read a book, ever? Or did you spend all your time in college learning how to smear your feces onto protest signs?

First, why do you think red states trend red? (think carefully because you’re about to reveal a great deal about why your side keeps losing)

Second, the Constitution as originally written absolutely favored state power over federal/centralized power. What you see as a bug, we see as a feature. In fact, the Founders worked very hard to ensure that more power was vested in the states than in central government. Why do you think was? How has this been undermined over the past two centuries?

Half of Trump’s crowd will soon be disillusioned when his incoherent policies become so obviously ineffective that they can’t be ignored. That will leave the bigoted and the h8trs.

So far, it’s been just the opposite. Reluctant Trump voters like myself are thrilled and even surprised that Trump has not been a disaster. Americans are loving the Trump tax cuts and improved job market. Consumer confidence is increasing. People have more money in their pockets to spend as they wish . . . and they LIKE that. Go figure.

You come here and spew the most inane nonsense day after day. I love a good troll; they can be so insightful, amusing, and even, on the rarest of occasions, provide food for thought. You are a bit of a disappointment. I read your comments, and I just don’t get what you find so marvelous about yourself. I’m being serious. You’re like a robot, spewing pre-programmed nonsense. You’re so clueless that you brag about winning points you clearly didn’t (and are clearly intellectually incapable of winning.).

My favorite is when you sneer down your nose at people who have just handed you a new one. You gloat and strut . . . and it’s just so sad. Reading your comments I’m often torn: is he just tapping out crap he read somewhere else to earn a buck (in which case, I get it) or is he tapping out crap because he really, truly doesn’t have even one working brain cell?

Fuzzy, I may not always agree with you but, boy howdy when you decide to pants someone in public it can be fun to watch.

Embrace the power of “and”.

It’s hard to get intelligent people to work at a desk in a room with hammer and sickle flags and Che portraits for < minimum wage.

That’s one fact-check I’ll take your word on, instead of looking for myself.

Barr is laughing up her sleeves at “conservatives” who think she’s one of them.

Watch her show with some critical thinking about what’s being normalized and promoted. It ain’t good…

Nope, your critics are right. You should just get with your tribe.

Besides, anyone who thinks he can be an individual, without any connection to a collective, in a world with 7 Billion People is foolish.

I have a counter offer for you. You put a giant dome over as much land as you can gather. Keep all the gasses, effluent and waste contained inside and I don’t give a damn what you do. Isn’t that the cardinal rule of libertarianism? Your freedom ends when you impinge on mine.

“Keep all the gasses, effluent and waste contained inside…”

Thanks, no, we’d prefer you stay outside.

Is that really the best you have? Why would you want to reinforce the stereotype that Trump supporters are low intelligence, low information reactionaries who cannot even form a simple rhetorical argument?

As noted, you’re a waste, as are all commies.

Even at minimum wage, you’re an overpaid troll.

Is that really the best you have?

It’s probably all you merit.

It’s like discussing developments in modern physics with a hamster—there’s little point in devoting much time or effort to it.

They actually laugh at you, rags. Needs to learn some perception skills.

Barr never claimed to be Conservative

As you well know Otis solely up to rags to determine how people are characterises here.

As you well know it is solely up to rags to determine how people are characterized here.

Roseanne has always been rude and crass. But I think she nailed it, she has remained politically left to central and the vast majority of Hollywierd had gone extreme left.

This last election was not about electing Trump it was about defeating Hillary. If she had been elected America would be in dire straits.

When someone just has to reply to every observation of their opinion that is usually the flag for me that their insecurity clouds their judgement.

I like Roseanne, but I’d decline the opportunity to watch her in a two piece.

People have been following Stormy long before this event. Just not for the same reason.