“nothing nefarious”, she claims 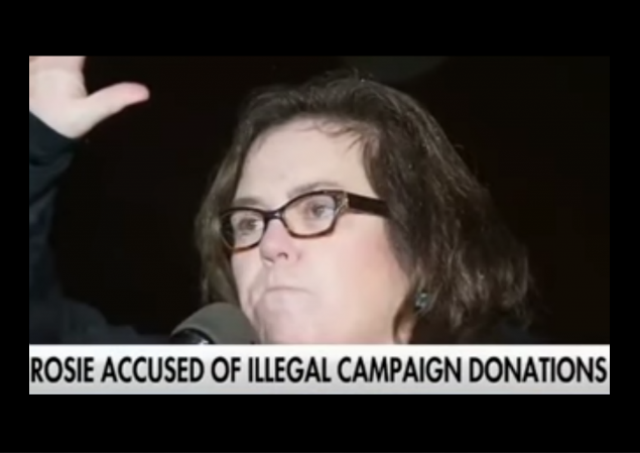 According to a report in the New York Post, Rosie O’Donnell repeatedly made more than the legally allowable campaign contributions to several Democrat candidates.

O’Donnell donated a combined $5,400 over legal contribution limits using four different names and five different addresses. Though she claims it was “nothing nefarious” and that she assumed campaigns would only accept as much as they were allowed.

She says she uses liberal fundraising site ActBlue to make donations. O’Donnell also claims she assumed the site would only accept the maximum allowable donation.

“Nothing nefarious,” the outspoken star and Donald Trump arch-nemesis wrote in an email to the Post. “I was not choosing to over donate.

“If 2700 is the cut off — [candidates] should refund the money,” she wrote. “I don’t look to see who I can donate most to … I just donate assuming they do not accept what is over the limit.”

O’Donnell said she donates often, and uses the online liberal fundraising platform ActBlue. “My anxiety is quelled by donating to those opposing trump [and] his agenda — especially at night — when most of these were placed.”

O’Donnell allegedly over-donated to five campaigns, all Democrats, including the campaign of Rep. Adam Schiff, the Democrat poster Rep for the Trump/Russian collusion hogwash.

O’Donnell donated $2,950 to California Rep. Adam Schiff, a 17-year veteran of the House, for his primary, according to his campaign filings. His campaign didn’t return messages seeking comment.

Lauren Underwood, an Illinois congressional candidate, reported $4,200 from O’Donnell for her primary, filings show. Her campaign didn’t return a message.

And Omar Vaid, a little-known congressional candidate in Staten Island and Brooklyn, reported $3,450 in primary donations from O’Donnell, filings show. Vaid’s finance director said the campaign “inadvertently designated” some of the money to the “wrong election” and would amend its filings.

Asked how much she gave to Vaid, O’Donnell wrote, “I have no idea.”

She said she assumed ActBlue “limits donations to the max allowed.”

She added, “I keep donating” and that her brother Tim handles her money.

O’Donnell hates Trump and often uses her public Twitter account for anti-Trump and anti-Republican tirades. She’s also prone to conspiracy quackery, like the time she suggested Baron Trump was autistic.

Upon hearing the news, AG Sessoins took the whole family on a three month cruise to the North Pole.

He always did want to see the land of the midnight sun. I’m waiting [but not expecting] for the Donut Lady to be prosecuted.

It’s stuff like this that highlights the shortcomings of our system of government. John Adams expressed it rightly, “Our Constitution was made only for a moral and religious people. It is wholly inadequate to the government of any other.”

Of course he was referring to Christianity where truth in all matters counts. Meaning, your yes means your yes, and your no means your no.

Muslims and secular leftists fall into that “of any other.” Both of these groups take advantage of that presumed system of honesty by intentionally practicing dishonesty knowing that there’s little risk of suffering for doing so.

Ahh Rosie, such an ironic name, like a Farmer would give to his favorite pig.

She is right about one thing, though, there should be more heat on the campaigns that took the money, but not to let her off the hook, either.

Ok fine Rosie, then why use four different names and five different addresses. Even if the campaign was playing by the rules how could they know. Nothing nefarious here … of course not, because the rules don’t apply to you do they Rosie. Because Rosie is better than the unwashed masses of the fly over states and she knows best how to live life, and that we should all follow her great life an praise her like a gawd … or else. Rosie O’Donnell you sicken me.

“They” prosecuted Dinesh D’souza for MUCH LESS.

I think most wealthy dems violate this law regularly, and I will add that I think it’s a dumb law. People should be able to donate as much money to candidates as they want to, so long as it is disclosed, in my opinion.

The real crime is not that Rosie donated too much – the crime is that Obama and Holder weaponized the Justice Dep’t and used it as a tool of oppression against anyone who annoyed them, by only enforcing laws against their political enemies.

With the variations of names / addresses even lying comey would have to admit INTENT !!!

It means nothing of the sort. She is protected by the “Connected Persons Clause” of the UniParty constitution.

Well even if she is telling the truth and she is too stupid to understand the law, ignorance of the law is not a defense…Unless your name is Clinton…and she can still be charged, tried, and hopefully convicted.

The one campaign finance law I would love to see passed is that cadidates cannot receive any contributions from outside of the state they’re running in. These folks represent their voters but are beholden to the millions they receive from out of state donors.

Can’t be done, for the same reason that in-state donations can’t be banned. People have the right to help their preferred candidate be elected.

Also, besides it is to easy to circumvent such a regulation. Just lease a PO Box and boom, the donation comes from in state.

I received a mailer from Devin Nunez last week asking for money. He’s in CA and I’m in OH! Absolutely ridiculous that Congress can take donations from people they don’t represent (in which case nobody but the lobbyists should be able to give them funds).

O’Donnell donated a combined $5,400 over legal contribution limits using four different names and five different addresses. Though she claims it was “nothing nefarious” and that she assumed campaigns would only accept as much as they were allowed. […]
“I don’t look to see who I can donate most to … I just donate assuming they do not accept what is over the limit.” […]
She said she assumed ActBlue “limits donations to the max allowed.”

That may have been a fair assumption, and perhaps it’s even true — but with the best will in the world how on earth could either a candidate or ActBlue know that she was over the limit if she was using different names? Further, what conceivable reason could there be for using false names, except to evade the limits?

Trump should direct the relevant US Attorney to prosecute her and not to settle for anything less than a prison term, simply to get justice for D’Souza. Yes, directly order it. Let them call it interference if they like. The USA works for the president and is not entitled to any independence. Let the lefties’ heads explode and then demand that they explain why she deserves better than D’Souza got. Demand the same explanation from O’Donnell herself.

If she is not prosecuted, or if there is a settlement without jail time, there should be a demonstration outside the USA’s office demanding that D’Souza get an official apology, an full pardon, and a fat compensation check.

I read that she spelled her name differently as you mentioned but she also used four different addresses. Sounds pretty fishy. Maybe we should ask Hillary what should be done?

it’s unlikely O’Donnell or her benefactors will be penalized

Benefactors?! What benefactors does O’Donnell have? She’s a rich woman, why would anyone give her anything? More to the point, how can I have any confidence in the reporting of someone who’s incapable of using basic English correctly?

Translation—after sloshing out on the same stuff Hillary drinks.

Her goose is cooked by her own words … assuming law enforcement bothers to turn the oven on.

over legal contribution limits using four different names and five different addresses. Though she claims it was “nothing nefarious” and that she assumed campaigns would only accept as much as they were allowed.

They wouldn’t know how much was allowed if she’s using different names and addresses.

Looks like she needs someone who can feed her much better excuses. As Dean Wormer almost said, “Fat, criminally inclined, and stupid is no way to go through life, son.”

If we don’t have the rule of law and equal application of the law, we have NOTHING.

So long as Sessions remains the GOPe rat AG, we have nothing.

Sounds to me as though it’s time to go through the books at ActBlue.

Why? What have they done wrong?

Maybe nothing; that’s not a good reason not to have a good witch hunt, right?!

Just like a lib, for her to assume that since there is a law in place that someone else will make sure that I follow it. No personal responsibility for her own actions.

Is that Michael Moore in the photo?

Between her and Michael Moore I can’t determine which is the bigger train wreck.

Replies are directly from the leftist playbook under the chapter of accountability.

I don’t know nuthin’ ’bout (fill in the blank)

Ahh yes, others of equally-good will and integrity will NEVER, EVER accept campaign contributions that might even remotely skirt the outer limits of propriety.