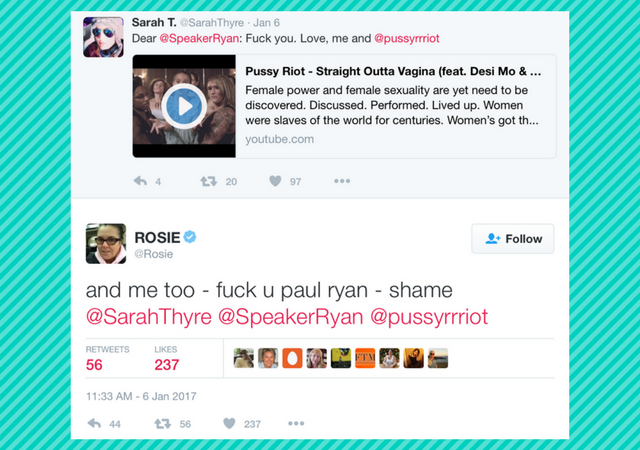 The tweet came as a reply to one from “Strangers With Candy” actress Sarah Thyre, who dropped the F-bomb in her own post about Ryan, writing, “Dear @SpeakerRyan: F— you. Love, me and @pussyrrriot,” along with a video called “Straight Outta Vagina.”

She sent the tweets as Ryan presided over a joint session of Congress to verify Electoral College votes and a day after the Speaker announced GOP lawmakers would move to cut federal funding for Planned Parenthood.

DELAY THE DAY – DO NOT SWEAR IN A MAN WHO ONLY LIES #ResistTrump https://t.co/TdU4XtGydU

She asserted Trump has a “severe mental illness” and should seek immediate “hep”:

he has a severe mental illness – he is in need of hep https://t.co/D085LX3oEz

he has a severe mental illness – he is in need of hep https://t.co/D085LX3oEz

This little gem is particularly nutty: 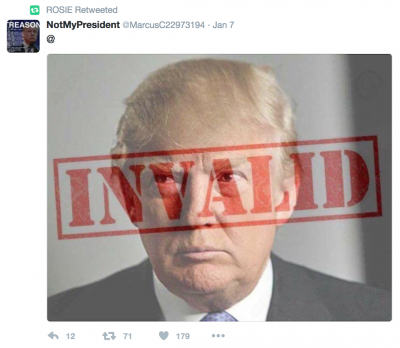 I get it. I don’t like Trump either. But like him or not, voters chose him. He will be our next president for better or worse, but pretending he won’t be sworn in and begin working from the Oval Office is bordering on delusional.

If there was ever an election that drew clear boundaries bewteen coastal elites and the rest of the country, this one was it.

Ha – Rosie is the one who has a severe mental illness and needs help. Classic case of projection.

I don’t love Trump either. Way too thin skinned. He should ignore the morons. He was fairly elected and will be President. Rosie is very sick. When she attacked Trump’s son she went lower than I thought possible.

Whenever I think of Rosie, I realize the wisdom of the Middle Ages development of nuns, convents, and vows of silence.

And whenever I think of Ragspierre, I remember this – “Better to remain silent and be thought a fool than to speak out and remove all doubt.”

You can also take the monastic vow of silence – we might all enjoy it. And…. the vow of silence is not limited to Christian faiths. Many other religions engage in the practice of silence.

BTW – Rosie can shut her mouth on all things …. Rags can shut up about putting down all women because of one assh*le

When I think of Rosie, I think of all the wisdom of farmers throughout the ages who built pigsties.

They’re a bunch of six-year-olds.

Rosie’s about eight. She’s not just stomping her feet, holding her breath until she turns blue, and yelling that he’s not HER President; she has notions of cause & effect, and plans—albeit childish ones—to defeat the new babysitter. So, maybe about eight.

Though unlike real eight-year-olds, this is as old as she’ll ever get.

Another loud mouthed, ignorant, Holyweird ‘celebrity’ whose 15 minutes of fame was over 30 years ago.

This shows that women can be as putrid as any man, and there are many progressive women that are extreme in forcing themselves on others. Or else!

For Planned Parenthood, why not deduct a fixed sum for each abortion they perform? (Let Soros make up the difference.) Then they would have to choose if they will divert actual funds for services so that some can get their abortions. Maybe require it to build up and even promote adoption, rather than give lip service.

This Diamond and Silk video says it well:

Women have been reduced to taxable commodities, womb banks (for male transgender/homosexuals and crossovers, and other dysfunctional orientations), Democratic leverage, and as mercenaries in the war against unworthy women, men, and babies, too.

Female chauvinists are in pursuit of political progress. They do not have the best interests of women, men, or babies in mind.

Maybe all the billionaires in Hollywood can find PP. would be a drop in the bucket for them. If they really care about other women….

Wow, that is really profound……

We’ve been blessed with life guidance by both Meryl Streep and Rosie O’Donnell all in the same week. How special is that?