The state’s legislation started to consider impeachment of the governor. 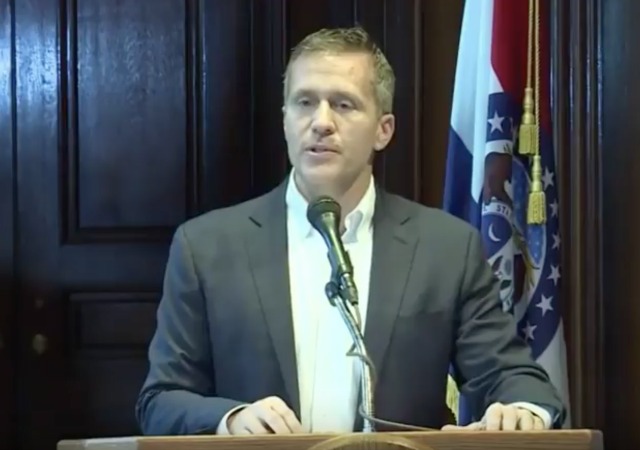 Embattled Republican Missouri Governor Eric Greitens has resigned due to scandals over an affair and campaign finances. From the AP:

Missouri Gov. Eric Greitens has resigned amid criminal and legislative investigations stemming from an extramarital affair and campaign finance questions.

The 44-year-old Rhodes Scholar and ex-Navy SEAL made the announcement Tuesday. The resignation takes effect Friday.

A St. Louis grand jury indicted Greitens on Feb. 22 on one felony count of invasion of privacy. The charge was dismissed during jury selection, but a special prosecutor was considering whether to refile charges. Prosecutors say he took a compromising photo of a woman with whom he had an affair without her consent in 2015, before his election.

The woman told a legislative committee Greitens restrained, slapped, shoved and threatened her during sexual encounters.

The Missouri Legislature began meeting in special session less than two weeks ago to consider impeachment.

In a statement, Greitens insisted that his resignation does “not end our fight” and that he “will always be a fighter for the people of Missouri,” but now it is time “to tend those who have been wounded.”

Cole County Circuit Judge Jon Beetum told the “secret group supporting Greitens, A New Missouri, has to turn over correspondence and documents showing potential coordination between the governor, his campaign committee and A New Missouri.”

Also, as the scandals brewed into the open, Hawley took action against Greitens. He not only demanded the governor resign, but launched an investigation against him for allegedly “obtaining a charity donor list without permission.”

*This is a developing story.

if the Dems & the GOPe can’t win the election, they will move heaven and earth to ruin the unacceptable winner.

will of the people be damned.

Well, I guess the famous SEALS adage turned out to be true for Greitens; the only easy day was the day he took those pictures.

“Prosecutors say he took a compromising photo of a woman with whom he had an affair without her consent in 2015, before his election.

The woman told a legislative committee Greitens restrained, slapped, shoved and threatened her during sexual encounters.”

Is there a shred of evidence beyond her claims? I have known quite a few women who enjoyed having pictures taken and asked for various mild and not so mild forms of pain, because such enhanced their sexual experience. Granted I did not marry one of the kinky ones, but they do exist. There are also plenty of ghetto lottery players looking for an easy and large payout.

This has ceased to be about the claims that may, or may not, be the product of recovered dreams. If there’s any “there” with misusing a charity he will get no defense from me, though I am not qualified to make a judgment beyond that.

My understanding is that he admitted the affair, and alluded to them playing some “cosensual games”, which he point out were not illegal. The only thing he really ever disputed was the existence of a photo, which has never been seen by anyone.

The prosecution against him on that basis was nonsense, but it still didn’t make him look very good, and Mo. republicans seem to have decided that their chances in the fall were far better with him gone. He resigned because of some developments earlier today which made impeachment look very likely.

It works for the right.

Sorry, downvoted you by accident and guess what, you can’t undo it.

There was no photo.

The woman says she “dreamed” the whole thing.

Yeah. Law warfare is designed to bankrupt the target. Nut it feels like there is more to this misuse of donor things that triggered the resignation.

I read early in the attack phase that during the election tens of Navy SEALS wrote a letter criticising his fitness to be a leader. Given the tightness of the fraternity that should have raised flags.

Due to Lawfare, you mean.

He had no scandals.

He shoved it right back in the media’s face and they had no counter for this. The media had become used to conservatives rolling in to a ball and not fighting back!