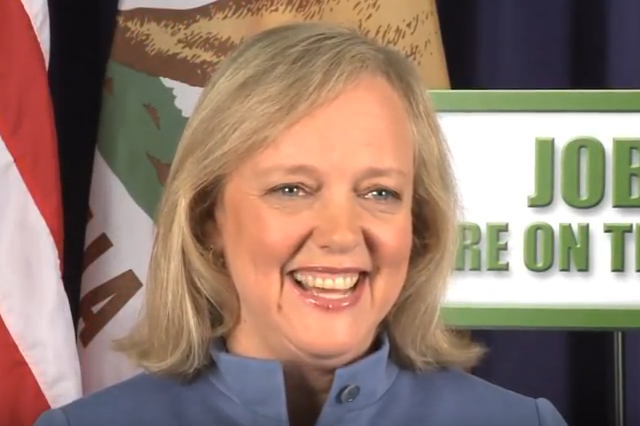 Back in 2010, during my early days of Tea Party activism, our group (the SoCal Tax Revolt Coalition) was invited to take a meeting with the Republican candidate for governor, Meg Whitman.

The California Republican Party asserted that she was the ideal candidate. I suspect that was because she could fund her own campaign. Meg had a net worth of $1.3 billion in 2010, and she spent more of her own money on the race than any other political candidate spent on a single election campaign (to that point).

However, it was clear that the state GOP felt the could co-opt the citizen activists of the Tea Party, so her “reaching out to us” consisted of dully-presented platitudes and instructions on how we were going to help her campaign.

Needless to say, we did little on her behalf. In fact, at that time, I wrote:

As a big fan of Mad Men, I decided to break the Passion Index into two categories: Inebriation Level (to help forget the flaws) and the Excitement Level (to celebrate the choice in a totally un-politically correct way). Inebriation Level raring is 1 to 5 cocktails; the Excitement Level is 1 to 5 cigarettes (5 being the best for major leg-tingling thrills). Totally awesome selections with no negatives get the brandy-and-cigar choice; horrible picks with no redeeming qualities get the marijuana joint rating. With this in mind, here are some of California’s current ballot hopefuls with their assigned Mad Men Passion Index:

Looking back on it, I should have written that my actual excitement level was one puff of a cigarette.

The election results were a surprise . . . to absolutely nobody in the Tea Party.

Now, this icon of political ineptitude is endorsing one of the worst picks among the large suite of gubernatorial hopefuls.

Meg Whitman, the former eBay and Hewlett Packard CEO who was the Republican nominee for California governor eight years ago, has crossed the aisle to endorse Democrat Antonio Villaraigosa for the same office.

…“Even though she’s a Republican, Meg is endorsing the candidate who she believes is best for the office,” said a person who’s worked with Whitman in the past and asked not to be named in order to speak candidly about her perspective. “In her belief, Antonio Villaraigosa is far and away a better choice than Gavin Newsom on both the economy and education.”

Those of us who recall Antonio Villarigosa’s tenure as Los Angeles mayor will agree with this assessment published in Politico:  “Villaraigosa’s actual legacy boils down to three things: deep disappointment, unrealized potential and brazen betrayal.”

In fact, former constituents track him down to protest at campaign events.

Why has Whitman made the endorsement? Because she is one of the many Republicans who voted for Hillary Clinton in 2016, and the “Trumpian” candidate, Republican John Cox, is now running second in California’s “jungle primary”. She hopes to bump him off by having the former LA mayor take that spot.

I project that she will be as successful in this election as she was in 2010.

Sad. but Meg has always been what Barry in ’64 labeled “a NY VALUES REPUBLICAN” Meaning someone who hates conservatives. Teddy proclaimed himself to be a PROGRESSIVE. And when he count make the GOP a leftist party (being unlike todays NY values GOPe; a man of honesty and honor) formed his own party to crush the conservative GOP. His party wasNOT the Bull Moose Party – it was , as he proclaimed himself to be, THE PROGRESSIVE Party.

Meg has been an anti-conservative establishment GOP gal from day one.

Many establishment GOP folk endorsed Clinton Fall ’16. That she is backing Tony is not shock. The shock is for maybe the first time in her life , she is being upfront and honest.

Rockefeller Republicans are about business: the country’s future be damned.

She’s not a leader, but a follower of trends.

How anyone could embarrass themselves by endorsing villaragosa (probably the most inept mayor of a major city in American history) is amazing enough, but a so-called ‘republican?’

Who are her role models, McCain? Flake? Corker? Obama??

Keep your eye on niki haley: she’s not much different.

Hillary is her model. She, like much of the GOPe, is a Hillary Republican.

I’m not the least bit surprised. What are these types of “Republicans” good for? Some commenters say “business.” Yet most of the Republicans cited in their comment are usually against tax cuts. They’re for crony capitalism that solely benefits themselves…but what politician from either side isn’t?

Another in the long tiresome parade up and down the ticket of “the most electable GOP tool.” First the GOP abandons CA to our leftist supermajority. Couldn’t even support a credible challenge to Boxer, then the stupidest Senator in history. Then, the expert class in national media and local voices like Hugh Hewitt and Medved – TrueConservatives, one and all, parachute in every 4 years, to hector the little people “Just hold your nose and vote for Romney/Jeb!/McCain/Whitman;” “it’s our only way to defeat Obama/Hilary/Gov Medfly,” they said. Really worked great. Meg is only reason no. 50,0002 why the GOP Expert Class™ with their lame consultancy deals and idiot white boards has no credibility with the rube remnant here in our golden backwater.