Will Californians be willing to give another businessman a shot at the top state spot? 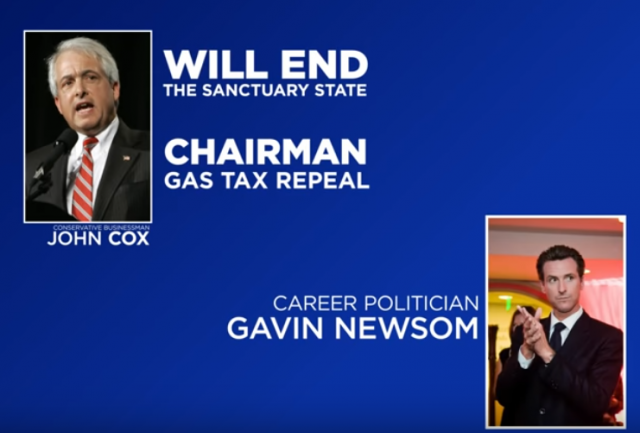 We have been following “The Most Interesting Governor’s Race in the Nation”, as California’s “jungle primary” system offers a sizeable selection of gubernatorial hopefuls.

Because of the primary rules, it is quite possible that two Democrats will be the ones on the General Election ballot. However, it is hoped that the Republicans can consolidate behind one of their better-known candidates: Businessman John Cox or State Assemblyman Travis Allen.
To that end, President Donald Trump has endorsed John Cox in an effort to unite the GOP behind one of the two candidates.

“California finally deserves a great Governor, one who understands borders, crime and lowering taxes,” Trump tweeted. “John Cox is the man – he’ll be the best Governor you’ve ever had.”

The endorsement comes as Republicans hope to avoid a nightmare scenario in the June 5 race: having two Democrats advance to the November general election.

“I believe the president and I have the same goals, and that is to make life better for Californians,” Cox told KQED News.

Republican Party officials have expressed concern that GOP turnout will suffer without a nominee in the general election.

…Trump’s endorsement follows the support of California House Republicans, including Majority Leader Kevin McCarthy, who came out behind Cox earlier this month.

California finally deserves a great Governor, one who understands borders, crime and lowering taxes. John Cox is the man – he’ll be the best Governor you’ve ever had. I fully endorse John Cox for Governor and look forward to working with him to Make California Great Again!

The Democrats are also scrambling to get another Democrat in the final 2, as it is assumed Lieutenant Governor Gavin Newsom will end up being the winner in the primary phase of this election.

The June 5 primary is a little more than two weeks away, which means state Treasurer John Chiang, former state schools chief Delaine Eastin and former Los Angeles Mayor Antonio Villaraigosa are in an all-out sprint for that second spot.

The polls give little guidance. While Newsom has been on top in virtually every survey, it’s an ever-changing field for the runner-up slot, with Villaraigosa and Republicans John Cox and Travis Allen all in the mix.

With those same polls showing that more than 10 percent of the voters remain undecided, however, that gives even Chiang and Eastin, who bring up the rear in most of the surveys, a chance to catch fire and move up.

I have to admit, I was thinking about John Chiang my vote. However, all the Democrats are focused on the War on Trump and being the best General of the #Resistance, including our usually sane Treasurer. Here is a sample of the video ads the state’s Democrats have produced:

So, I decided to pick one of the Republicans.

Interestingly, it was Newsom who convinced me to vote for John Cox, and not Trump’s endorsement. One of Newsom’s recent TV ads featured Cox campaign platforms of being against the Sanctuary State laws and teaming with the President to build the wall. I saw that and said, “Yes, Please.”

While it is apparent Newsom wants to run against Cox, he may wish to recall that Hillary Clinton wanted to run against Trump. Trump’s cagey campaign choices led to an unexpected victory.

Conferring with friends before I completed my mail-in ballot, I conferred with several friends about who to pick. Many indicated they would vote for Cox, saying he was “Trumpian”.

Many Californians feel they have been railroaded by Sacramento in more ways than one. We might be willing to give another businessman a shot for the top state spot.

Brace yourself, however, for continuing California crazy.

Will Cox also do away with mail-in ballots? And early voting?

Same-day voting with photo ID is the BEST way to avoid fraud.