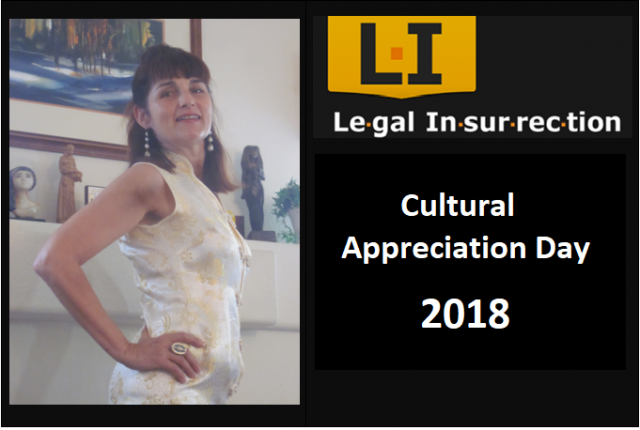 In fact, this idea came from a response I was going to make during the social justice brouhaha over 18-year old Keziah Daum’s Chinese cheongsam prom dress. I, too have such a dress.

My husband bought it for me during his first trip to China in 2004.  I had a stunning, sky blue version in high school, so I was thrilled with this lovely, yellow creation. 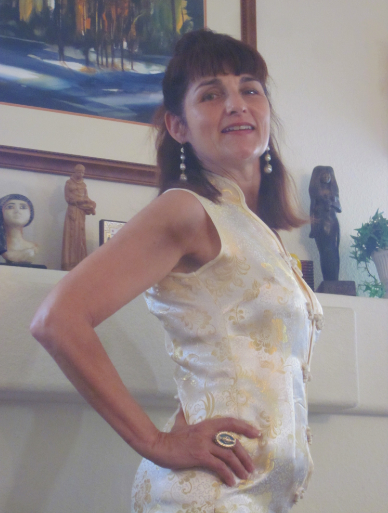 Instead, inspired by Empty Chair Day and Chick-Fil-A Appreciation Day, or team put together this fun celebration.

The key difference between “appreciation” and “appropriation” is intent. Cultural appreciation is an homage to the nation or peoples from which the item or activity is being borrowed. It conveys admiration, respect, and a desire to be part of that cultural..even briefly.

I have had a long history of cultural appreciation, starting with stealing my father’s kimonos that he bought while serving in Japan during the Korean War. Sadly, I had no pictures of those.

When I was in graduate school, I was able to take my dream trip to Egypt. There, I developed a lifelong love of belly dance. Here is a picture during taken one of my few performances. 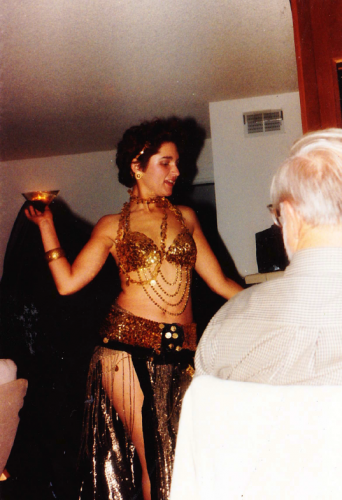 More recently, I have embraced Indian culture and #Bollywood. I have an entire collection of Indian kurtas and jewelry to go with this new interest. 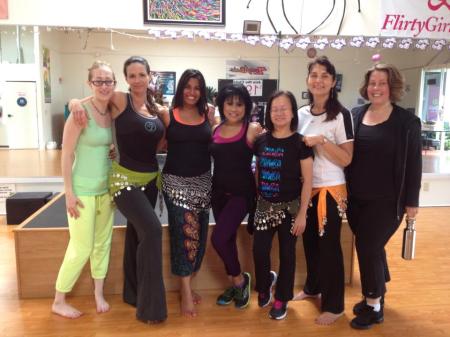 Dance is not the only thing I have appropriated. A couple of years ago, I crossed off drinking German beer in Germany off the bucket list. As you can plainly see, I appropriated a lot of hefeweizen. 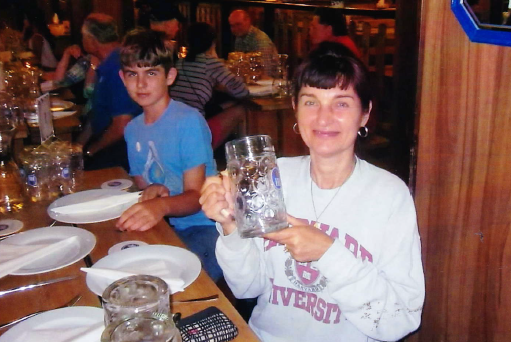 Finally, in a move that is sure to give any social justice warrior an attack of the vapors, I got corn rows during a family trip to Mexico. I felt like Cleopatra in Cancun, clearly appreciating both ancient Egyptian and Mexican cultures at a local cantina. 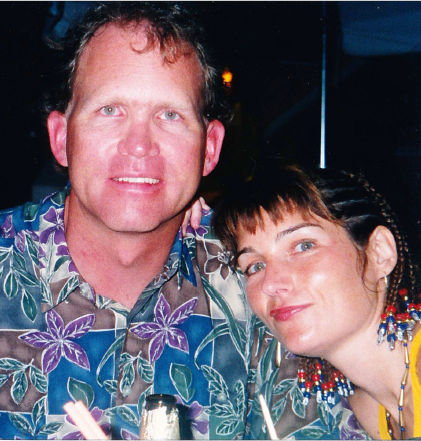 I am clearly a Cultural Appreciation addict. Now, I have a great excuse for more dance and booze…I will need to collect pictures for next year’s celebration.

Dear Lady, you wear them all very well!

Thank you so much. You have just made my entire weekend.

Well, that’s easy for you, but what about me? I can’t dance. I don’t drink. And I don’t have hair.

Why, I’ve just been triggered!

you can always wear a toupe and mustachio

I can’t recommend anything for baldness.
But for the drinking and dancing, who is stopping you?

I have no desire to drink, and no skill to dance. And you can’t help me with the one I could use help with.

The story of my life.

I can’t dance.
I can’t talk.
Only thing about me is the way I walk.

Most reasonable and sensible people in other countries who legitimately hold ancestral roots to their values and customs appreciate when foreigners are interested and immersive in what they hold dear.

It seems to me that the only real whiners are the white guilters and other SJWs that are long-removed from their immigrant ancestors. Their outcries are really a form of concealing their own shame for various reasons (sometimes because they have lost touch with their heritage or because they want to apologize for things out of their control)

Just be careful when you do your Irish Culture appreciation day.

I love to be Irish for one day.

I own a kilt. Does that count? I also belly dance Sunday evenings during Senior Ladies Nite at the Kitty Kat Klub out on Hwy 301.

I also belly dance Sunday evenings during Senior Ladies Nite at the Kitty Kat Klub out on Hwy 301.

So, do the old ladies enjoy the show? And do they tip good?

Heck, yes, they enjoy it. All of ’em hootin’ and hollerin’, half drunk on chianti and cheap beer. Some nights I clear $15-20 in tips. In CASH. Please consider my average customer is over 70 with poor eyesight.

I appreciate the trigger warning…

Except for one thing. uit makes me cringe when I hear people mispronounce pierogi and paczki.

I always make it a point when misappropriating to do the best I can to properly pronounce any words I misappropriate. Such as karate, which is badly mispronounced. Irt seems only fair.

i can personally recommend the beer in Germany and the vodka in Russia.

How about religious misappropriation?
Some Christians are freaking out because #savelucifer is ( was seems twitter is blocking it now ) trending on twitter right now.

Question to Progressives: How can one be a “citizen of the world” and living “without borders” but avoid cultural appropriation at the same time? Isn’t it one big unified world? If you are also for minority rights, then in that big unified world people are color are the majority.

I’ve begun to refer to myself as a person without color.

Some simple minded people may call it cultural appropriation, I call it enjoying life. There is so much to experience out in the real world. I was honored, via my military assignments, to live in many varied parts of the world. The native people always liked if you made an effort to learn something about their ways, food, customs and so on. I have many great memories learning things from people who I could not talk to. It is amazing how you can communicate via pointing and smiling at each other. The smiles nearly always happened.

Was that you with Tom Hanks in the movie “Charlie Wilson’s War”?

Those question marks???? A mistake. 🙂

Come on, people. We all know “cultural appropriation” is just a way for the left to find new ways to nag us until we surrender.

Japan prides itself on its cultural appropriation.

P.S. Drinking in Munich for Oktoberfest is on my bucket list, too. My daughter beat me to it.

We’re going to need to see more belly dancing pics before we believe fully in that cultural appreciation.

Thanks,
Barry and the committee

Overturned by the Fen Circuit Court. Section 3 paragraph 2 clearly states “pictures and VIDEOS shall be the proscribed medium”.