“There are jobs available even for those with a poor work history like you. Get one” 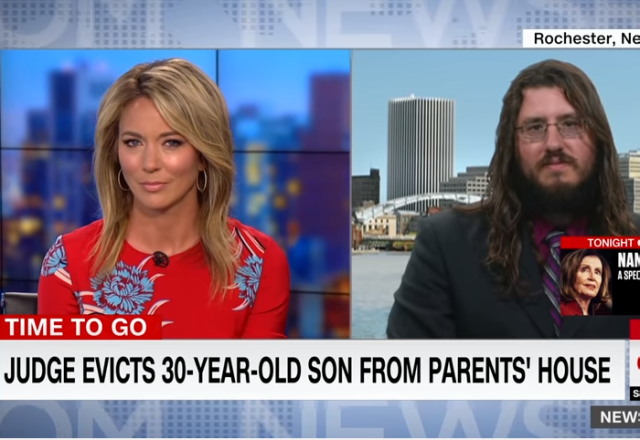 A 30 year old New York man named Michael Rotondo has been ordered by a judge to vacate his parents’ house. Rotondo has been living with his folks for the last eight years without paying rent. The parents also claim he refuses to get a job.

Here’s a report from Reuters, via CNBC:

A New York state judge has backed a couple’s battle to kick their 30-year-old son out of their home because he has not contributed toward household expenses or helped with chores and they wanted him to get a job.

New York State Supreme Court Judge Donald Greenwood on Tuesday ordered Michael Rotondo to leave his parents’ home in the town of Camillus, about 200 miles northwest of New York City, according to Anthony Adorante, an attorney for the parents, Mark and Christina Rotondo…

In court documents, Michael Rotondo referred to a “common law requirement of six-month notice to quit” before a tenant may be removed.

“I just wanted a reasonable amount of time to vacate, with consideration to the fact that I was not really prepared to support myself at the time where I was served these notices,” the younger Rotondo told local CBS television affiliate WSTM…

“After a discussion with your mother, we have decided you must leave this house immediately,” the couple wrote in one of the letters. “You have 14 days to vacate. You will not be allowed to return.”

In another note, the parents offered him $1,100 to help look for a job and an apartment and shared advice on how to manage on his own.

“There are jobs available even for those with a poor work history like you. Get one — you have to work!”

In an absolutely bizarre interview with CNN’s Brooke Baldwin, Rotondo claims he has a job but won’t elaborate. He also talks about having a son who was removed from his custody. There are few details available about why he lost custody, but apparently, that was a tipping point for the parents. If you watch to the end, he claims that despite being a Millennial, he is very conservative.

Christopher Ingraham of the Washington Post says Rotondo’s situation is more common than you think:

30-something and still living at home? You’ve got lots (and lots) of company.

A 30-year-old Upstate New York man was ordered to leave his parents’ house by a state Supreme Court Justice on Tuesday after rebuffing several attempts by his parents to get him to move out.

The case of Michael Rotondo has made national and international news, and has already become a butt of late-night talk show jokes. It seems to have struck a chord as an extreme example of a phenomenon demographers have been tracking for years: growing rates of young adults, particularly young men, living in their parents’ homes even after graduation from high school and college.

According to the U.S. Census Bureau, as of 2017, nearly one in five men ages 25 to 34 lived in their parents’ home. That’s a significantly higher share than the 12.5 percent of women that age living at home. Both numbers have increased dramatically in recent decades, roughly doubling since 1960.

I don’t know if this is a generational thing but speaking as a Gen Xer, my friends and I couldn’t wait to move out of our parents’ homes after college.

Conservative? I think not. Conservatives believe in standing on your own two feet. This sludge seems to believe that just because his poor parents caused him to be born he is entitled to be a parasite on their lives forever. Disgusting creature.

It took them eight years to throw him out? This is seven and a half years overdue.

That fact also gives rise to the personalities of the two parents. I cannot imagine how my daughter or son could pull that in my home. I also cannot imagine that I would ever trow them out either. Something is really wrong with this entire family.

Rotondo should get a haircut, that will improve his job prospects.

This is what happens when you coddle your child and let the Grubernment indoctrinate them instead of teaching them the ability to think for themselves. He can’t even answer a simple question and just repeats what he has memorized from social justice warriors despite it being unrelated and unintelligible.

There is more of this to come…hang on folks it’s going to be a rough ride!

A locksmith could end the entire problem.

Not necessarily depending on the place that you live. This is the result of strong tenants rights.

Put down the video game controller, shave and get a haircut, then go look for a job. Man child syndrome (often correlating with man bun syndrome) seems to be on the rise.

darn, only 4 years after obamacare protected (up to age 26 parents policy) too.
LOSER!!

living in their parents’ homes even after graduation from high school and college.

The “even” is deceptive. A high percentage end up back there after leaving normally but later being ruined and bankrupted, most likely after a divorce.

That’s a significantly higher share than the 12.5 percent of women that age living at home.

Each of our three sons TEMPORARILY “boomeranged” via job-loss catastrophe or, sadly, divorce, but EACH OF THEM are now out and productive in their lives.

NONE of them wanted to bounce back to the nest and each was quite eager to get financially on his feet and soar again.

Not an easy or comfortable path for any of us (!!!) but we’re once again empty nesters cheering them on. One married with grandchild, one engaged and the third soon to be.

It CAN be done.

I’m talking about the misleading effects of bare statistics, and unsupported assumptions about causality.

We choose to live in a multigenerational house hold. It’s how we grew up I had five generations in the house as a boy. It’s different on the res though and it looks like the family here is utterly dysfunctional.

I can’t imagine a relationship with any of my adult kids like the odd one here. Communicating through letters? The last time I wrote anything other than happy birthday to one of my kids was ‘need cat food’ or something like it.

I’m sorry. I just don’t think he is any different than say CNN’s own Brian Skleltar or millions of other snowflakes.

“According to the U.S. Census Bureau, as of 2017, nearly one in five men ages 25 to 34 lived in their parents’ home. That’s a significantly higher share than the 12.5 percent of women that age living at home. Both numbers have increased dramatically in recent decades, roughly doubling since 1960.”

I think part of the problem is that women have told men they’re not needed. We have denigrated and marginalized young men. What is their purpose now?

Women still need walking ATM machines. Or at least find them convenient, even when not strictly needed.

Change requires incentive. As long as needs are being met, there is no reason for a parasite to alter its behavior. We would have women call us on the crisis hotline and ask us how to get their husband sober. Do you put him to bed? yes. Do you make him breakfast? Yes. OK, tomorrow, lock the door and let him spend a night on the porch in the rain. It is our experience that their will be a greater willingness on his part to do things differently.

I have long contended that liberalism is simply untreated co-dependent behavior on a grand scale. It gives the provider a reason to exist, and always at the expense of the person receiving the services. We mean old conservatives just see things differently. In summary, if nothing changes, nothing changes.

What exactly makes (made) this guy a tenant?

I’m no lawyer, but I was looking into evicting our son last year. Turns out the law in many states, including mine, treats guys like this as GUESTS. So no need to evict formally, although putting things in writing can’t hurt. You can just tell Sonny to move. Give him some notice…OR NOT. No compliance? Just put all his belongings on the curb.

30? If it took all this time for the parents to finally do something definitive, you gotta think this clueless basement dwelling manchild is a creature of their own making.